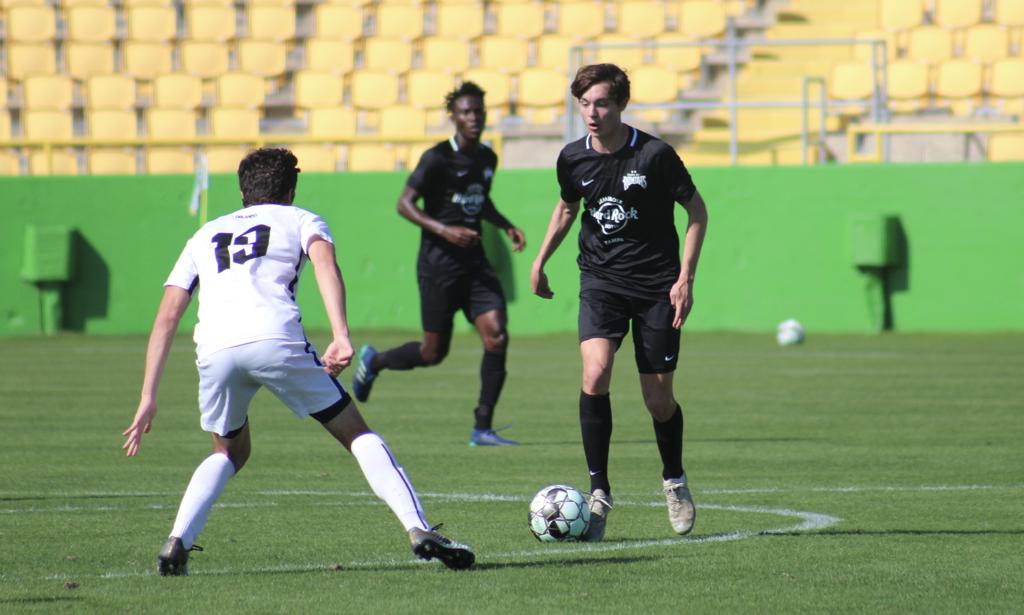 Jack Casey with the ball for the Rowdies against UCF

ST. PETERSBURG, Fla. (February 15, 2018) — A youth movement has taken control of the Tampa Bay Rowdies roster this winter as Head Coach Neill Collins reshapes his squad for the season ahead.

Gone are some of the more senior players from years past and incoming are young, fresh faces just starting to make their way in the professional game.

Of the 22 players on the roster for 2019, none are older than 28 years old. This winter, the Rowdies have signed 20-year-old Canadian Malik Johnson and acquired 18-year-old Jordan Doherty and 20-year-old Caleb Richards on loan from Sheffield United and Norwich City, respectively.

There are even younger faces mixing into the group, though, with some of Tampa Bay’s most talented youth players participating in preseason camp and even suiting up with the Rowdies in preseason matches.

Robbie Soronellas, also 17, played on the national championship team with Casey in 2017 and plays high school soccer at Steinbrenner High in Lutz. He previously played club soccer with the FC Tampa Rangers.

All three players were on the bench for the Rowdies’ preseason opener against Birmingham on February 2. Casey played in the match against UCF a week later and more than held his own. The Rowdies will continue to identify the top talents in the area in an ongoing process.

“One thing that we realized seven or eight months ago was that we had to get more in touch with the local youth soccer and particularly the elite players,” Rowdies Head Coach Neill Collins said. “We are very blessed to have some of the best talent in America on our doorstep and I think it’s our duty to provide these kids with a pathway and experience in the professional game.

“It’s been great having Jack, Robbie and Dan training with us, working with our players and seeing how professional teams work,” Collins said. “They’ve been doing really well and that’s proven by Jack Casey playing almost 40 minutes in a preseason victory over UCF and putting in a very, very good performance. Seeing the level of the professional game up close should help their development and inspire them to keep working hard in both the classroom and on the field.”