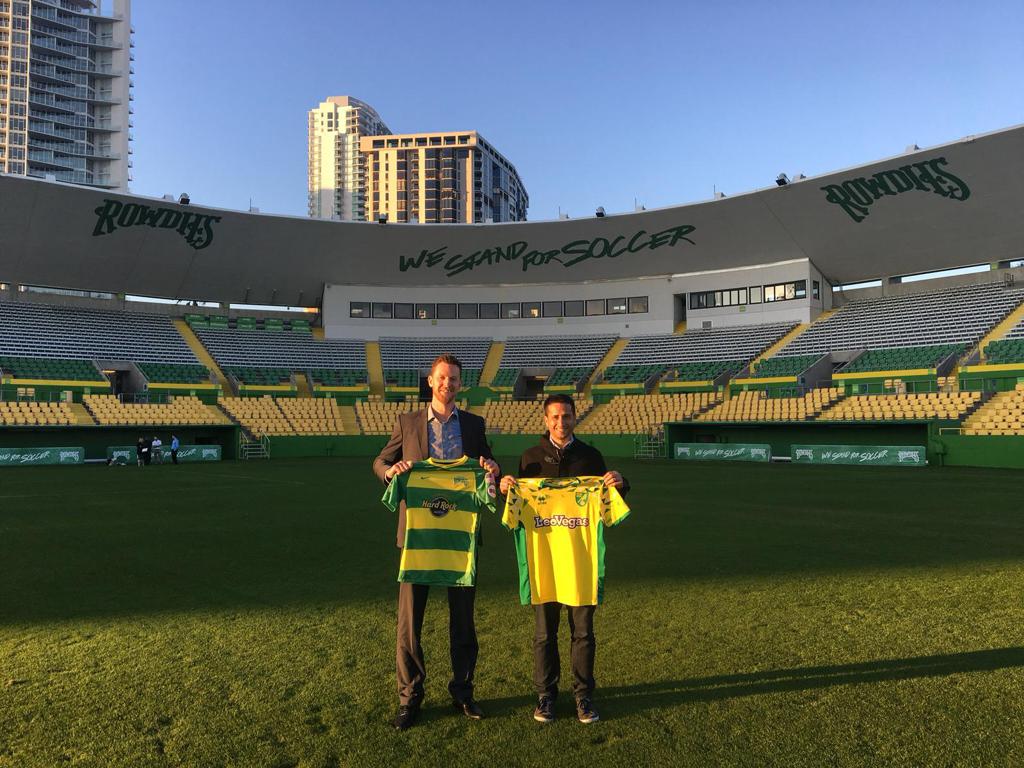 The Tampa Bay Rowdies and England's Norwich City FC are delighted to launch a ground-breaking transatlantic yellow and green partnership.

The Canaries and the Rowdies today confirmed a long-term deal which sees the EFL Championship club and their USL Championship counterparts join forces in an exciting and mutually beneficial link-up.

As well as joint merchandising opportunities, the deal will see promising players from City’s successful Academy benefit from competitive loan spells with the Rowdies and will also lead to further visits to the Tampa Bay area for the Canaries.

That tour saw Norwich City first team players, coaches and sponsors embark on a pioneering trip to Tampa Bay, with Al Lang Stadium playing host to training and staff and coaches of both clubs meeting to share ideas and experiences of the game from both sides of the Atlantic.

The Canaries’ Head of Partnerships Sam Jeffery said this is a significant partnership which sees the Club strengthen the bonds with the Rowdies and the Tampa Bay region as a whole, as well as providing Norwich with an invaluable presence in the vibrant US soccer market, where UK football is hugely popular with fans.

He commented: “There are so many synergies between our two Clubs - far more than just the shared colours – so we’re delighted and really proud to be able to formalise our partnership.

“The Rowdies are owned by the Tampa Bay Rays baseball team and their whole mantra is to be ambitious and work to bring young players through. That approach cascades down to the Rowdies and we want to share that same ambition with them.

“The Rowdies Chief Operating Officer Lee Cohen and his staff have been a real pleasure to deal with over the last year and their generous hosting of our team training in November was executed brilliantly. We also have great links with Head Coach Neill Collins who knows our Academy Manager Steve Weaver really well, so it’s such a no-brainer to formalise our partnership.

“There’s so much opportunity for growth in this and in fact we’re currently in talks together around a really ambitious project that we hope will help set a lasting Norwich City footprint in the Tampa Bay region over the next decade, and do a lot of good in the local communities over there and here in Norfolk.

“We’re here for the long-term and we really look forward to becoming part of the Tampa Bay sporting family.”

Lee Cohen, Chief Operating Officer of the Rowdies, said: “Since hosting the Canaries at Al Lang Stadium last year, we have worked closely with the organization’s leadership team to develop a strategy to maximize the potential of our shared long-term goals to develop soccer in Tampa Bay, as well as to drive growth for both clubs globally. We recognize that this club is made up of a very special group of people, and we look forward to collaborating with them to bring talented players from Norwich City into our organization to be impactful from day one.”

Details of upcoming projects will be announced imminently.