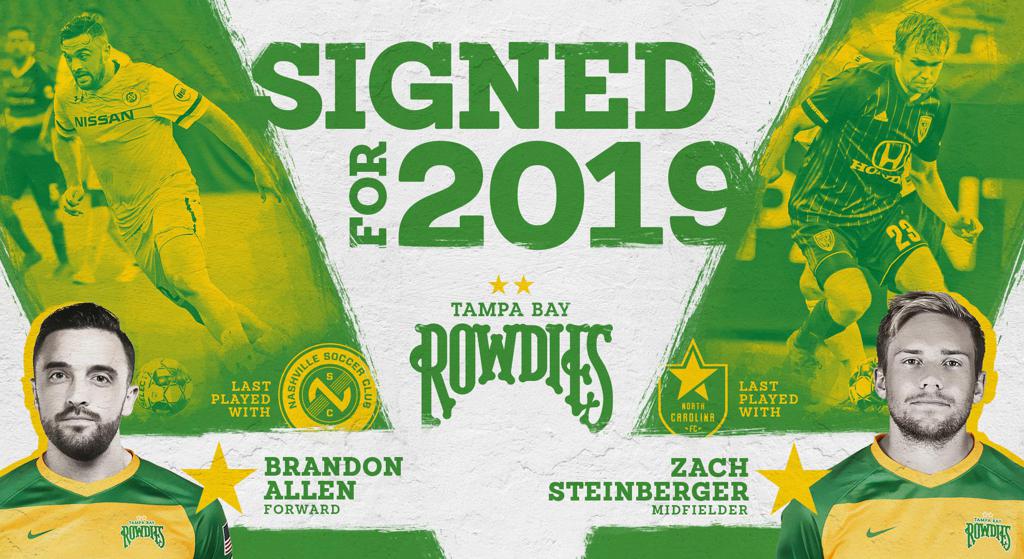 Allen, 25, finished 2018 as Nashville SC’s leading scorer, helping the club reach the USL Cup Playoffs in its inaugural season with eight goals and two assists in 22 appearances. He started the year with Bethlehem Steel FC and moved to Nashville after scoring twice in seven games.

A New Jersey native, Allen was an All-American and Hermann Trophy finalist at Georgetown before signing an MLS homegrown contract with the New York Red Bulls in 2016. He spent most of that season in the USL with Red Bulls II, and earned a spot in the All-League First Team after scoring 21 goals and recording five assists as the Red Bulls won USL Cup. Allen scored a hat trick in the Red Bulls’ 5-1 win over the Swope Park Rangers in the final.

“Brandon’s goalscoring record speaks for itself,” Rowdies Head Coach Neill Collins said. “He’s someone that I played against and coached against and I know how big of a threat he is to score at any time. He’s been very successful in this league, and he’s an important part of what we want to do as an attacking team.”

Like Allen, Steinberger also switched teams in the middle of the 2018 USL season, with North Carolina FC acquiring him on loan from the Indy Eleven in August. Steinberger made 17 appearances for Indy, scoring once, before joining North Carolina and scoring four goals and adding three assists in only nine starts.

A creative central midfielder, Steinberger turned pro with the Houston Dynamo in 2015. He had loan spells with Indy, RVGFC and the Jacksonville Armada over the next two seasons before signing with the Armada in 2017. In Jacksonville, he scored eight goals and had two assists, as well as winning the 2017 NASL Goal of the Season Award.

“Zach has been in Florida before with Jacksonville and IMG Academy, so he’s fully aware of the conditions of a Florida summer and his fitness levels are off the charts,” Collins said. “He gets himself into great positions and scores a lot because of how hard he works. I think Zach’s personality and hunger embodies a lot of what our new squad will be about and I’m excited to work with him.”