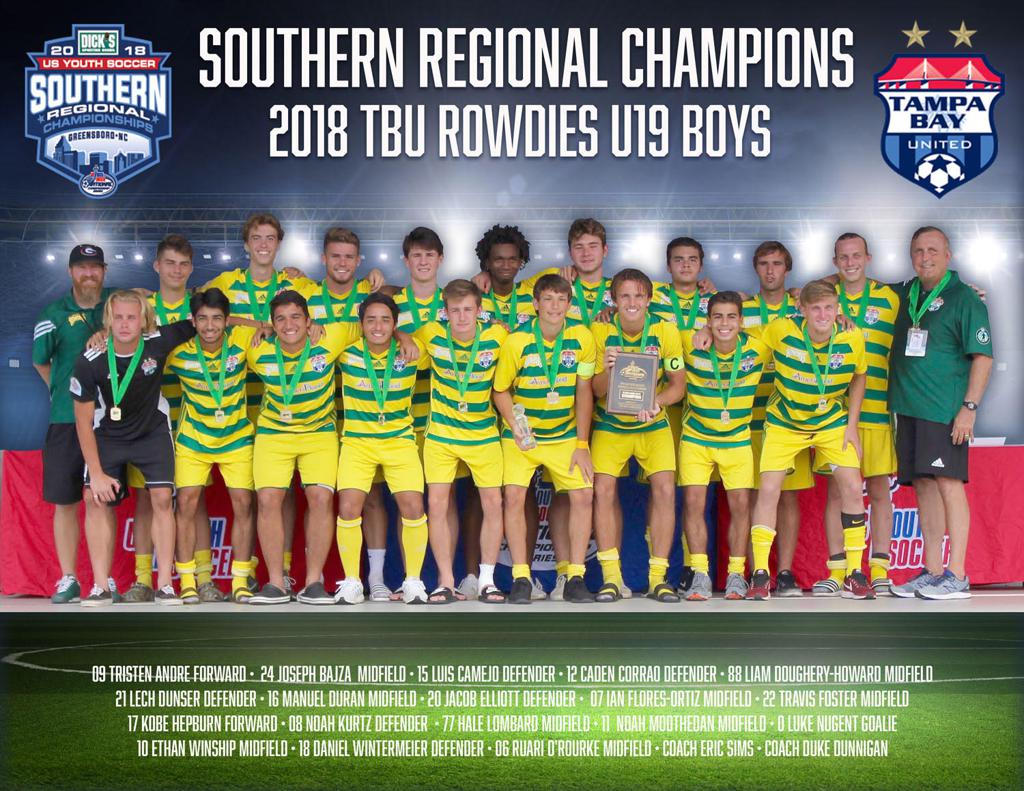 The U19 Tampa Bay United Rowdies faced-off against South Carolina United FC 99 Elite, where the team achieved a 4-3 victory in a nail-biting Southern Regional Championship match.

Hale Lombard opened the scoring in the 30th minute and teammate Tristen Andre notched 2-goals in the next five minutes to give Tampa Bay a commanding 3-0 lead at halftime.

South Carolina got a breath of life in the 75th minute with a long cross-field pass that was hit back across the face of goal to a South Carolina player who was waiting for the tap in.

Tampa quickly responded on a 2v2 counterattack just three minutes later. Andre, who settled a crossed ball off his chest, stepped away from the defender and then calmly slotted his chance beyond the keeper.

As the clock was winding down, South Carolina cut the lead to two off a free-kick in which the Tampa Bay goalie never had a chance to set his wall. South Carolina pulled within one during stoppage time scoring a header off a ball floated into the box; but could not find the final equalizer before the whistle.

“Playing 6 games in 7 days was a true challenge. The collective team pushed through adversity, did not crumble under pressure, and delivered 4 devastating goals that shocked the SC squad,” said Coach Duke Dunnigan. “We couldn’t be prouder of these guys and their tremendous effort. They were here to win, and they proved themselves today.”

Coach Sims had the honor to present Travis Foster with the Southern Regional MVP Award and Keeper Luke Nugent with the Golden Glove Award. “Travis and Luke deserve these awards, but all 18 players contributed to bringing home this title.”

Our U19 Tampa Bay United Rowdies squad now advances to Nationals to compete for the James P. McGuire Cup. Both coaches agreed that Nationals are going to be tough.