Rowdies Strengthen Midfield with Signing of Taku and Oduro 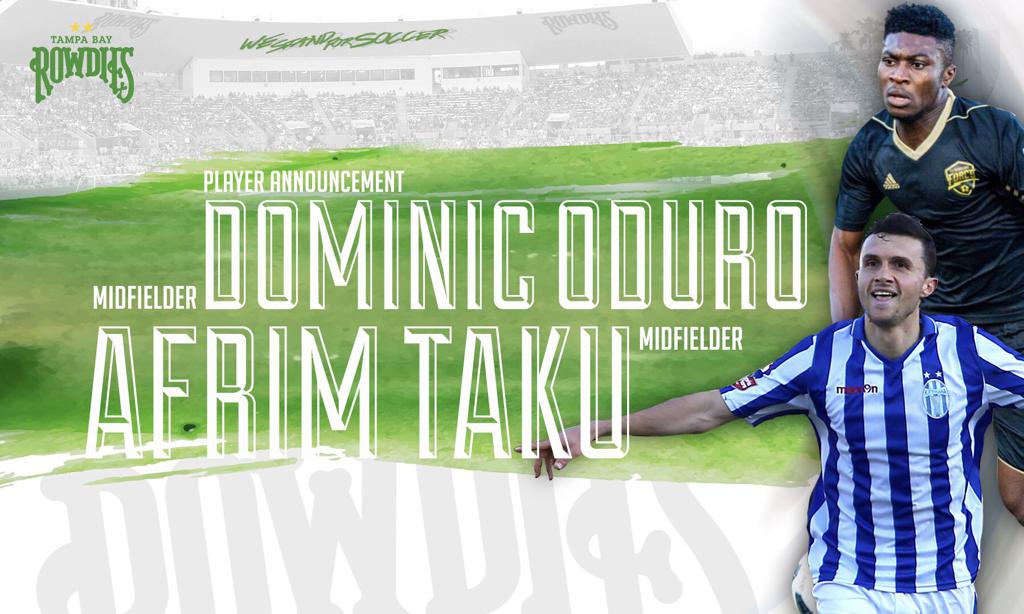 ST. PETERSBURG, Fla. (June 20, 2018) — The Tampa Bay Rowdies have strengthened their roster with a pair of new signings in midfielders Afrim Taku and Dominic Oduro, the club announced Wednesday. The new signings will be eligible to play pending the receipt of the International Transfer Certificate (ITC) and/or visas.

Taku is a 28-year old central midfielder that joins the Rowdies from Skënderbeu Korçë in his native Albania. Taku has played most of his career in the Albanian SuperLiga for KF Tirana and Skënderbeu, the two biggest clubs in the country. His career has included winning three Albanian Cups and two Albanian Supercups.

Oduro is a 23-year old midfielder that joins the Rowdies from FC Golden State Force in the USL Premier Development League. Born in Ghana, Oduro made his big break as a teenager when he was identified and signed by Manchester City’s academy.

“The Rowdies are a historical team and the players we bring in will be able to help us add to our rich history," said Rowdies Chairman & CEO Bill Edwards. "Taku will bring great game experience and a knowledge of the game that will only mix in well with the current team. Oduro is a young player who we have watched in the PDL for the last year and we think he has developed into a player that will impact this team now. It also speaks volumes to the PDL and the level of players in that league.”

While in the Manchester City academy, Oduro had loan spells with AGF in Denmark, Royal Mouscron-Peruwelz in Belgium and IK Frej in Sweden. He also made a pair of appearances for FC Nordsjælland in Denmark. He was eventually drafted with the 44th overall pick in the 2017 MLS SuperDraft by the Seattle Sounders but did not sign.

Both players began training with the Rowdies last week before signing contracts.