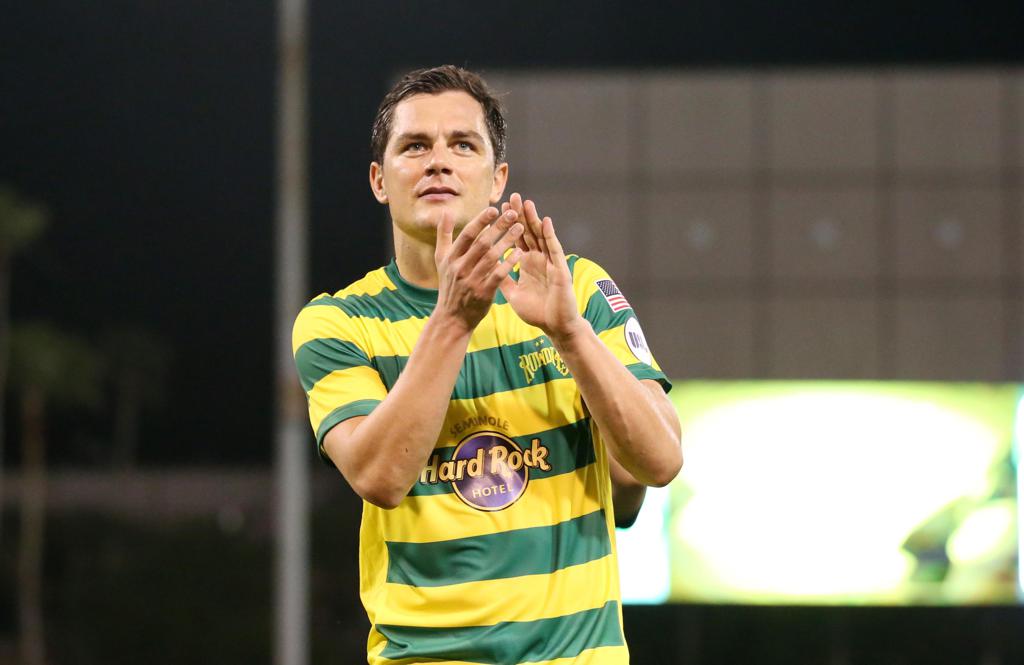 ST. PETERSBURG, Fla. (June 13, 2018) — The Tampa Bay Rowdies confirmed today that they are releasing Marcel Schäfer from his contract obligation in order to allow him to return to German Bundesliga club VfL Wolfsburg to take the position of Sporting Director.

Schäfer signed a two-year deal with the Rowdies in February of 2017, but his time with the club has been cut short to allow him to immediately begin the next phase of his soccer career.

Schäfer will return to Germany after a formal farewell during his final appearance as a professional soccer player in the Rowdies match against Penn FC on Friday, June 22 after the upcoming bye week.

“I am extremely grateful to Bill Edwards first, for bringing me to the Rowdies, and second, for releasing me from my contract so I can pursue my dream of working for VfL Wolfsburg,” said Schäfer.   “I am very proud to have been a part of this fantastic organization and to play soccer in America.  It has been a gift for me and my family.  The fans have been wonderful and have truly made us feel welcome. I know leaving mid-season is a hardship for the club, but Bill understands my history with Wolfsburg and my dream to be a part of their front office, and encouraged me to take this step.  I will be the first official German Rowdies ambassador and I am confident the relationship between the Rowdies and Wolfsburg will grow.”

“We are very sad to see Marcel go,” said team chairman and CEO Bill Edwards.  “He has been a leader both on and off the field since he arrived in St. Pete, and has been a great ambassador for the club.  However, I talked to Marcel at length and told him I would not stand in his way, even though he had a contract with us for the rest of the season.  It is a great opportunity for him, his family and his future.  Hopefully we can continue a relationship in the future between the Rowdies and Wolfsburg in regards to player development.”

“Despite the obvious disappointment we feel about losing such a good player, we can’t begrudge Marcel this fantastic opportunity that he has for the next stage of his life,” said Rowdies head coach Neill Collins. “As a club we have been lucky to have someone with his ability. First as a player and secondly as a coach, he has been a pleasure to work alongside. The great thing about football is it always moves on and while we will miss Marcel, it will be a great opportunity for someone else to fill his important role on the field.”

To date, he has played 45 matches for the Rowdies in all competitions, scoring seven goals and tallying 14 assists. He quickly became a fan favorite thanks to his unmistakable passion for the game.

Schäfer came to the Rowdies as a Wolfsburg legend after a decade with the club. He holds the record for appearances by an outfield player and captained the side to the 2008-09 Bundesliga title, the only Bundesliga championship in club history. He also led the Wolves to win the 2014-15 DFB-Pokal Cup.

He will now return to his former club and step into a leadership role in the front office. Wolfsburg has finished in 16th place in each of the last two Bundesliga seasons since Schäfer’s departure, winning the relegation playoff on each occasion to stay in the Bundesliga.

The entire Rowdies organization wishes Schäfer the very best in his new challenge and thanks him for his contributions to the Rowdies. Fans are invited to join in a spirited farewell at the club’s next match, Friday, June 22 at Al Lang Stadium.