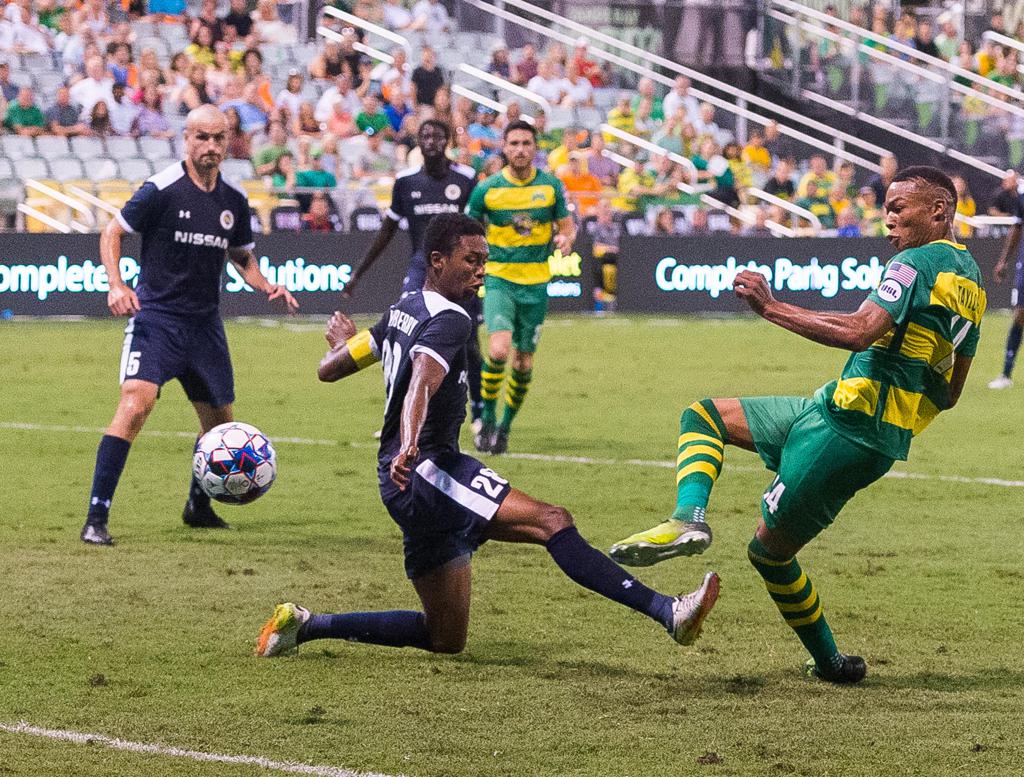 ST. PETERSBURG, Fla. (June 9, 2018) — After waiting more than eight weeks to make his Tampa Bay Rowdies debut, Leon Taylor didn’t want to wait too long to score his first goal for the club.

Taylor, a 25-year old forward signed by the Rowdies on April 5, made his first appearance for the club off the bench in the 64th minute of Saturday night’s contest against Nashville SC at Al Lang Stadium.

Twenty minutes later, he was celebrating his first goal, a late equalizer that rescued a point for the Rowdies (5-5-3, 18 points) and extended their home unbeaten run to 18 regular season matches.

“It feels real good to be able to pull my side back from 1-0 down and put us back even,” Taylor said. “The ball kind of just fell to me. Somebody crossed from the right and the ball was kind of just bouncing around and I got my foot on it. I connected well with it and beat a good keeper in Matt Pickens.”

Until Taylor’s goal in the 84th minute, the Rowdies had been stymied by the goalkeeping skill of Matt Pickens, who shined in his return to Al Lang with his new club.

Pickens made five saves on the night.

“Lots of real positives to take,” Rowdies Head Coach Neill Collins said. “If you could have seen us work from Monday until tonight, you would have seen a lot of things put into action, but we just need to find the switch and turn those draws into wins.”

Nashville (5-2-5, 20 points) scored against the run of play midway through the first half, with Lebo Moloto finishing well from a Ropapa Mensah assist in the 22nd minute. Rowdies goalkeeper Akira Fitzgerald got down quickly and got a piece of the shot, but couldn’t prevent it from finding its way into the goal.

Down a goal, the Rowdies’ challenge was clear. Find a way to break through Nashville’s stingy defense or lose. Pickens’ six clean sheets coming into the match were the most in the USL.

Tampa Bay was aggressive in its pursuit of an equalizer, getting back on the front foot immediately.

The Rowdies had a pair of chances off a free kick in the 27th minute, with Hunter Gorskie and Tamika Mkandawire each firing shots from close range only to have them either saved or deflected out of play.

Junior Flemmings had a good chance in the 38th minute when he turned quickly with the ball and raced by a pair of defenders to shoot, but Pickens was there to punch the shot away.

Michael Nanchoff fired a volley on target in the 43rd minute, only for Pickens to make one of his signature acrobatic leaps to palm the ball safely over the crossbar.

Rowdies Head Coach Neill Collins inserted Leo Fernandes into the game at halftime and, in the 53rd minute, he nearly scored on a 30-yard rocket that narrowly missed the target.

As the match wound down, Nashville tightened up and began playing extremely slowly to try and grind toward a win.

It wasn’t meant to be though as Taylor made the most of his opportunity to pounce on a loose ball pinging around in front of Nashville’s goal. He put a foot through it kept his shot on target to pull the Rowdies back into the game.

All things considered, the Rowdies will be pleased to get a point out of the match.

“When you consider six or seven players that were probably on the team sheet at the start of the season were out tonight for various reasons, it’s a pretty impressive performance,” Collins said.