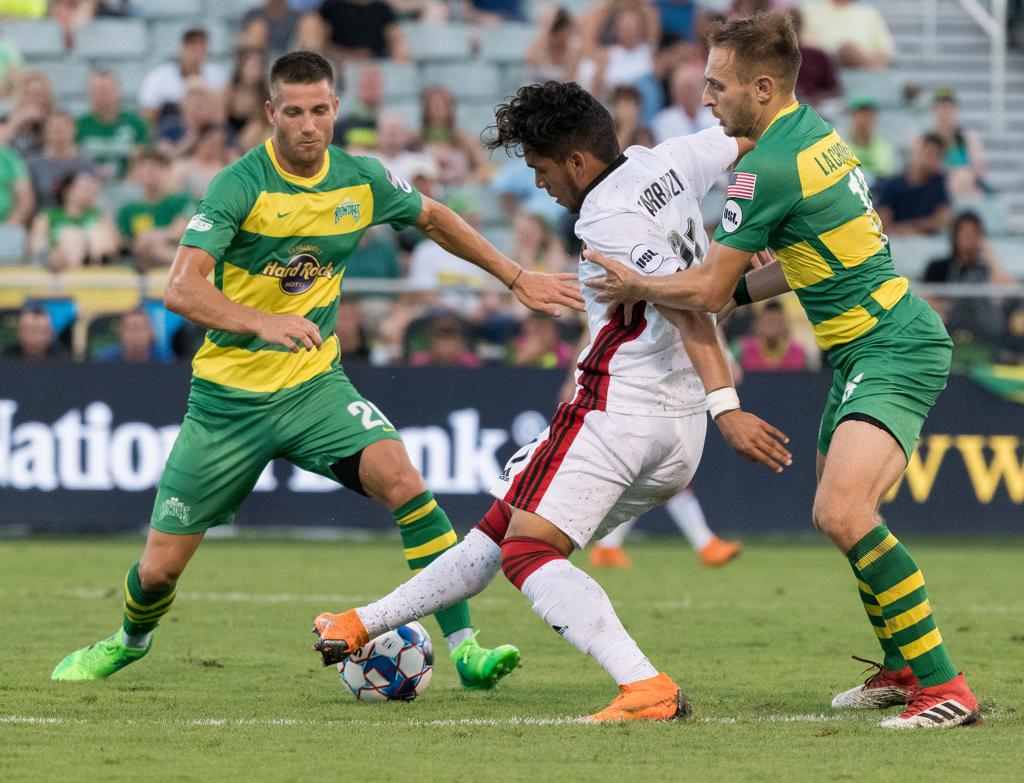 ST. PETERSBURG, Fla. (June 2, 2018) — For the first time in nearly two seasons, the Tampa Bay Rowdies were kept off the scoreboard in a match at Al Lang Stadium after being held to a 0-0 draw by Atlanta United 2 on Saturday night.

The Rowdies had scored in 30 consecutive home games prior to Saturday night, dating back all the way to a 1-0 loss against FC Edmonton on August 20, 2016.

“At the end of the match, we had pace, we had threat and we looked like winning the game,” Rowdies Head Coach Neill Collins said. “Sometimes you win, sometimes you don’t. There’s a lot to be proud of.”

The match never really got going in the first half with neither side able to establish itself and impose its style of play in a choppy opening half hour that featured a lot of whistles.

Tampa Bay was given a big boost in the 40th minute when Atlanta (2-6-4, 10 points) was reduced to 10 men when Will Crain received his second yellow card of the match.

The advantage was extremely short-lived though as Rowdies midfielder Marcel Schäfer was shown a straight red card only four minutes later, leveling the teams at 10 players each just before halftime.

With both sides reduced to 10 men in the second half, the match opened up drastically.

The Rowdies had the better of the play, racking up 15 shots (five on target), compared to eight shots and only three on target for Atlanta.

“It’s definitely disappointing,” Rowdies defender Hunter Gorskie said. “We always want to win at home. We struggled putting the ball in the back of the net. I thought we created enough chances, we just needed a little more composure to get on the scoreboard.”

Following the insertion of Alex Morrell and Leo Fernandes off the bench in the 66th and 74th minutes, respectively, Tampa Bay looked certain to score a winner with a dynamic attack.

Morrell and Fernandes paired perfectly with Junior Flemmings on the front line as the Rowdies sat deep and countered with blistering speed.

In the last 10 minutes, Fernandes created two dangerous chances for himself, but the Rowdies were ultimately unable to beat Atlanta goalkeeper Paul Christensen.

“The three players we had up top are pretty quick,” Collins said. “Alex Morrell played in the last home game and deserved his opportunity tonight. He took it. Leo Fernandes has been good at home for us and did really, really well. He probably could have or should have scored, but the biggest thing for me is that he changed the game. That’s what your substitutes are for.”