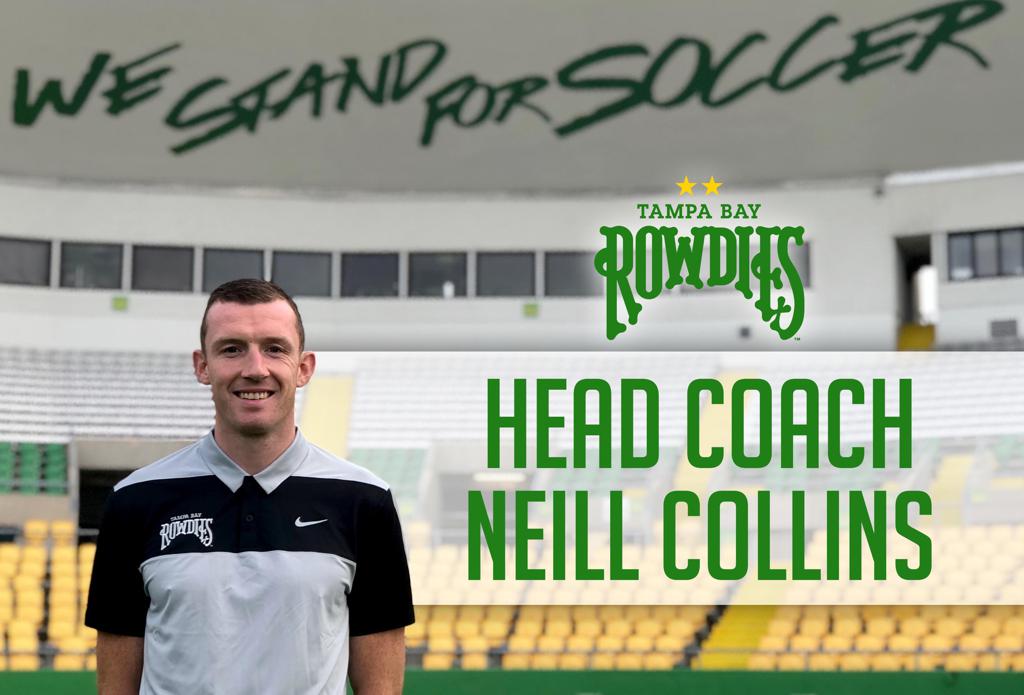 ST. PETERSBURG, Fla. (May 18, 2018) — After a professional playing career that spanned 18 years and 10 clubs, Neill Collins has taken the next step in his career by taking over as head coach of the Tampa Bay Rowdies, the club announced Friday.

Collins, 34, holds a UEFA A Coaching License and will coach his first match tomorrow night against the Pittsburgh Riverhounds at Al Lang Stadium.

To date, Collins has made 598 professional appearances in a staggering career. He wore the captain’s armband Wednesday night in what was his 67th appearance for the Rowdies since joining in 2016.

“I am excited to announce Neill Collins as the new head coach of the Tampa Bay Rowdies” said club Chairman and CEO Bill Edwards. “I’ve witnessed Neill’s intensity firsthand, and I know everyone in the locker room has immense respect for his ability and work ethic. He’s got the skills, the drive and the attitude to move the club to the top of the table. There are good coaches out there, but I think you can make a great coach by giving someone who already has a passion for the club a chance to lead it to victory. I have great faith in Neill. I know he intends to succeed in his new role with the Rowdies.”

“Curtailing my playing career is not an easy decision, but when an opportunity is as good as this one, it’s impossible to turn down,” Collins said. “It’s a fantastic club with many fantastic people behind the scenes and an excellent playing squad. I’m excited about the challenge of taking this club to where I think it should be.”

As he moves to lead the coaching staff, Collins is no longer expected to play for the Rowdies.

Collins owns and operates NC3 Coaching Academy in Lakewood Ranch, where we has worked with some of the brightest young soccer talents in the Tampa Bay area, as well as offseason work with established professionals.

He has also previously worked as a volunteer coach with the United States Paralympic National Team.

The Rowdies, led by Head Coach Neill Collins, take the pitch at Al Lang Stadium this Saturday against Pittsburgh Riverhounds. Kickoff is at 7:30 p.m.