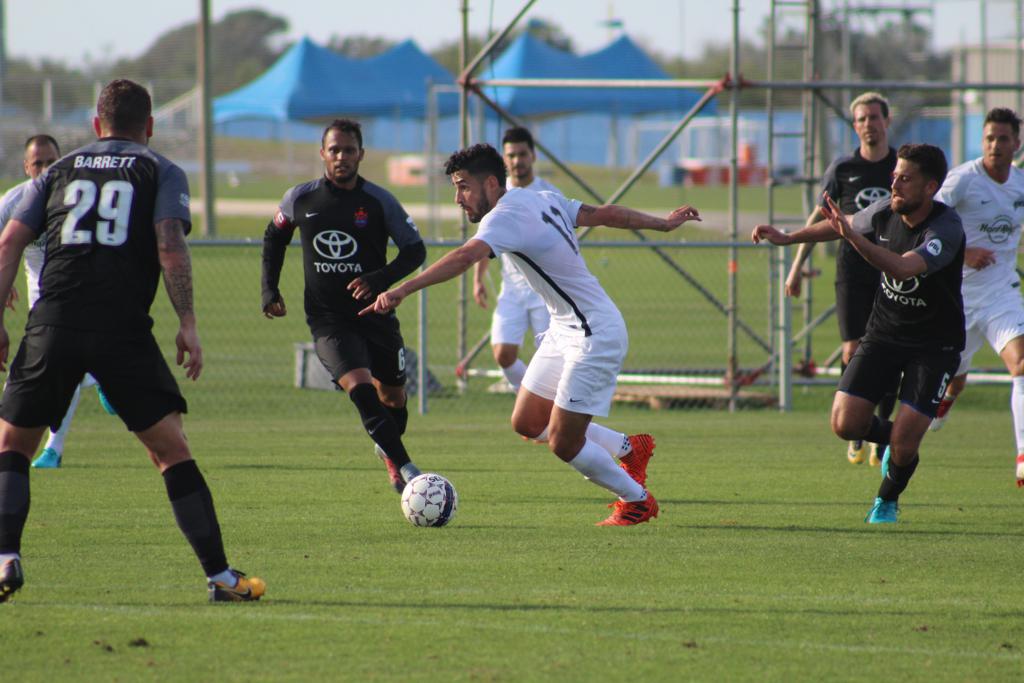 BRADENTON, Fla. (February 10, 2018) — Most of the Tampa Bay Rowdies’ roster got 45 minutes of game action as the Rowdies opener preseason with a 1-0 loss to FC Cincinnati at IMG Academy on Saturday afternoon.

With just eight training sessions under their belt, the new-look Rowdies actually looked sharp for most of the match on a warm afternoon in Manatee County.

Tampa Bay Head Coach Stuart Campbell fielded a different lineup in each half as the Rowdies build toward their regular season opener against Bethlehem Steel FC on March 17.

Of the Rowdies’ team in the first half, six players were playing their first match since signing with Tampa Bay this offseason, including goalkeeper Cody Mizell, defenders David Najem, Ivan Magalhães and Max Lachowecki, plus Flemmings and Graf in the attack.

Flemmings had a decent chance in the seventh minute when Martin Vingaard threaded a dynamite through ball, but Flemmings was unable to control the ball and take on Cincinnati goalkeeper Spencer Richey in a one-on-one situation.

Leo Fernandes, playing in his first match since a knee injury last June, had a point-blank shot saved by Richey 10 minutes before halftime.

Two Rowdies — Kyle Curinga and Jack Blake — made their unofficial club debut in a second half lineup that also featured one trialist.

Georgi Hristov seemingly put the Rowdies ahead in the 55th minute, but the goal was disallowed for offside.

Cincinnati’s goal came eight minutes later, with Garrett Halfhill receiving the ball in space near the penalty spot and finishing for a 1-0 lead.

The connection between Hristov and Marcel Schäfer already looks strong in 2018, with the pair connecting on several crosses, though none led to goals.

The Rowdies will  be back in action next weekend against the Montreal Impact on Saturday, February 17 at Al Lang Stadium in the second game of a Rowdies Suncoast Invitational Doubleheader. For tickets, call (727) 222-2000 or click here.