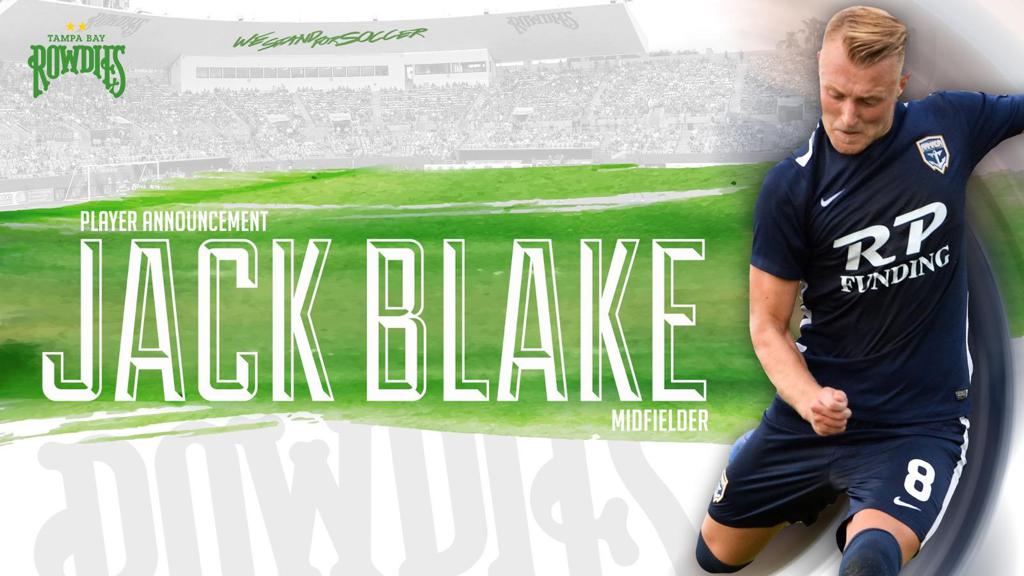 ST. PETERSBURG, Fla. (February 8, 2018) — The Tampa Bay Rowdies have signed another young attacker with the addition of midfielder Jack Blake, the club announced Thursday. Blake joins the Rowdies on a season-long loan from the Jacksonville Armada. Per club and league policy, further contract details were not disclosed. This signing is pending league and federation approval.

Blake, a 23-year old English attacking midfielder, is the 10th new member of the Rowdies to join the team this offseason.

“I'm so excited to be joining the Rowdies,” said Blake. “It is an honor and privilege to get the opportunity to put on the green and gold. I can't wait to play in front of all the amazing Tampa Bay Rowdies fans and go into battle with my teammates to make 2018 a year to remember!”

He was named the NASL Young Player of the Year last season after scoring nine goals and dishing out four assists in 27 appearances for the Armada last season.

“We’re delighted to add Jack to our 2018 roster,” said Rowdies head coach Stuart Campbell. “He had a fantastic season in 2017 and has proven to be very dangerous in the attacking third.”

Blake came up through the academy of his hometown club Nottingham Forest FC and signed his first professional contract with the club in 2012 as an 18-year old. He made no appearances for the first team, but he did have a short loan spell with Mansfield Town.

Blake arrived in North America in 2015, signing with Minnesota United FC. With the Loons, Blake made 11 appearances but didn’t fully find his footing until arriving in Jacksonville.

Blake is the newest member of a 23-man roster that now features 13 players returning from 2017 and 10 newcomers. The Rowdies officially opened preseason camp one week ago with their first preseason game set for this Saturday, February 10 against FC Cincinnati at IMG Academy in Bradenton.

“2018 will be a year to remember for Rowdies fans,” said Rowdies Chairman & CEO Bill Edwards. “Jack will help this club bring the USL Cup to Al Lang Stadium, which is the ultimate goal for everyone at the Rowdies. Join us this season, as we need your support in the stands if we want to raise the cup in 2018.”