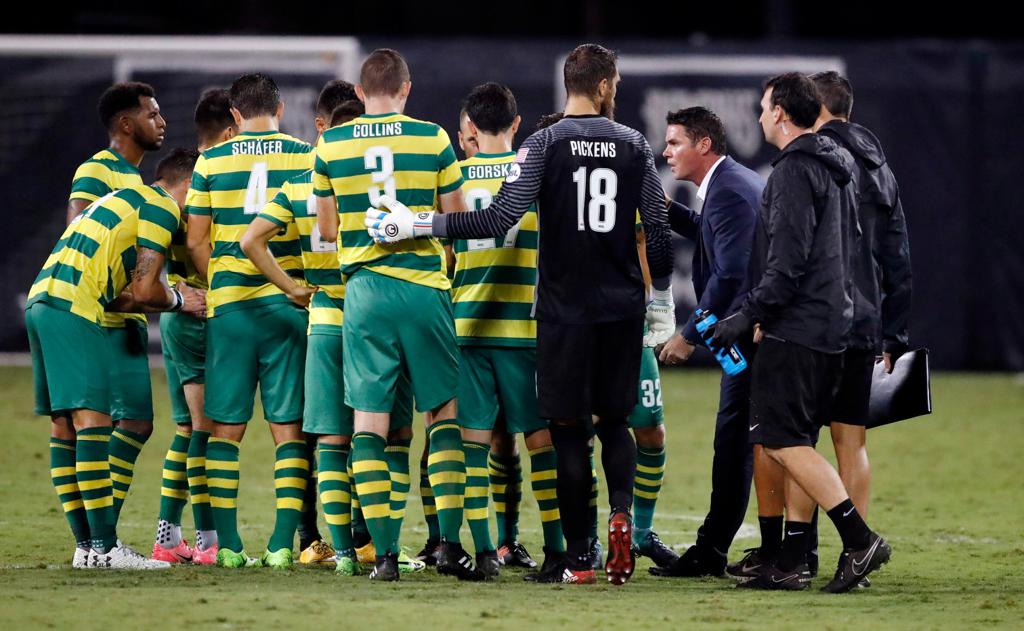 Georgi Hristov opened the scoring for the Rowdies in the 26th minute, but a Stefano Bonomo penalty kick in the 58th was enough to force 30 minutes of extra time. Bonomo scored again just three minutes into the extra time and the Rowdies were unable to score a goal and extend their season.

“I’m obviously really disappointed with the end result,” Rowdies Head Coach Stuart Campbell said. “I thought we played great with the amount of chances we created. Their goalkeeper made some unbelievable saves, we hit the woodwork a couple of times and had one cleared off the line. I’m disappointed that we didn’t get the win that I think we deserved.”

Tampa Bay racked up 23 shots, but could only find a way past Red Bulls goalkeeper Evan Louro once.

With the match even at 1-1 an hour in after following Bonomo’s first goal, the Rowdies put the pressure on to try and win it in regular time.

Sebastian Guenzatti created back-to-back dangerous chances in the 62nd and 64th minutes, with his low pass to Joe Cole cleared at the last second on the first and then Louro saving his attempted chip on the second.

New York’s best chance to win in regulation came in the 82nd minute on a mistake by Tampa Bay goalkeeper Evan Louro which allowed Arun Basuljevic a free shot on goal, but Pickens made the save to keep the Rowdies alive.

The Rowdies had chances in the 87th minute, when Michael Nanchoff had a shot saved at point-blank range, and the 88th, when Guenzatti fired a volley that required an epic diving save from Louro to deny it.

Tampa Bay started the extra 30 minutes on the front foot, with New York nearly scoring an own goal in the first minute, but the Red Bulls would soon take the lead for good.

Bonomo scored his second goal of the night and seventh in his last six matches in the 93rd minute, tapping in a Florian Valot assist to put the home team behind.

With 27 minutes to score a goal and extend the season, the Rowdies had no choice but to go all-out attack. Guenzatti and Georgi Hristov were joined by Martin Paterson and Alex Morrell in a four-pronged attack with Neill Collins also advancing forward as time ticked away.

In the 106th minute, Paterson put a header past Louro and on frame only for Red Bulls forward Junior Flemmings to clear it off the line and deny the Rowdies an equalizer.

Paterson had two more chances in the 109th and 113th minutes, but neither was on target.

Guenzatti nearly tied it for the Rowdies with a shot from 23 yards, but it sailed just inches over the crossbar and out of play.

Paterson had a shot on target denied by Louro’s sixth save of the night in the 120th minute and Rowdies defender Hunter Gorskie put a shot onto the crossbar in the final seconds, but the Rowdies never managed to score the goal to forced penalties.

“We look back on the amount of chances that we created and we missed chances not through poor finishing,” Campbell said. “You’ve got to give their goalkeeper credit. I think he had an unbelievable night. He had three or four world class saves tonight.”

It was a sudden and heartbreaking end to a record-setting season for the Rowdies.