Rowdies Gearing Up For Blockbuster Clash With FC Cincinnati 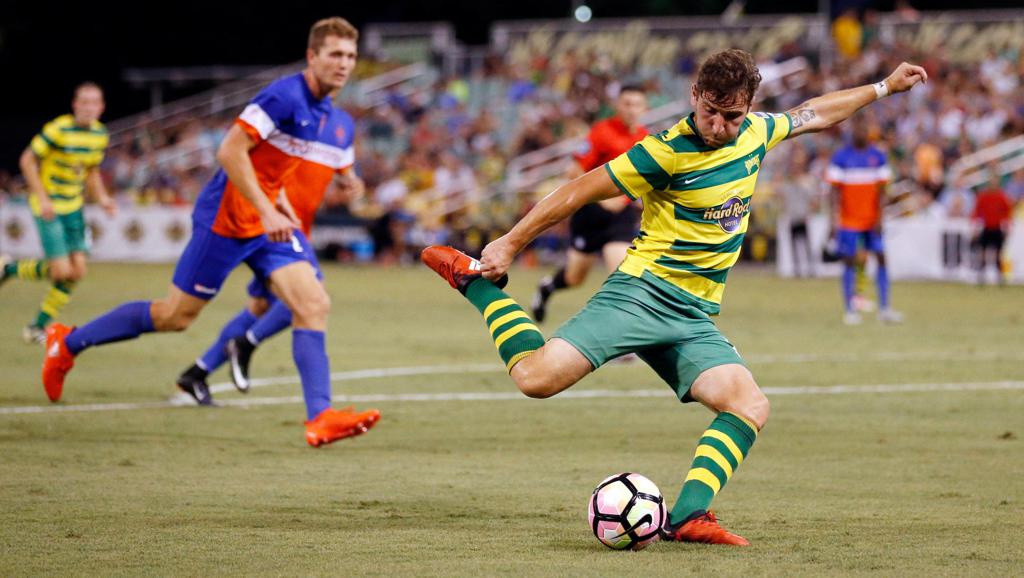 The last time FC Cincinnati came to Al Lang Stadium, the Rowdies’ season was teetering on the brink.

Coming into that July 6 match, Tampa Bay had gone eight games without a win, including being dumped out of the Lamar Hunt U.S. Open Cup by Miami FC. Tampa Bay had fallen from the top of the Eastern Conference to fourth place. A few days earlier, on July 1, the Rowdies had suffered a disheartening 2-0 loss in Charleston. A week before that, it was a 2-0 loss in Pittsburgh.

More than at any other point this season, it felt like the Rowdies really needed to win.

And win they did.

The Rowdies outplayed Cincinnati to the tune of 2-0 with a pair of first-half goals from Martin Paterson and Joe Cole before a lengthy weather delay and a somewhat uneventful second half, the exact type of game-killing performance that comes in handy in the postseason.

“I think our match against Cincinnati here was the turning point of our season,” Rowdies center back Neill Collins said. “We really needed to win and we went out and ended up as 2-0 victors. I think that was a real big performance for us in the context of our season and I’m sure all my teammates would agree.”

That game was the Rowdies’ 18th USL match, just into the second half of a 32-game regular season.

From that point, Tampa Bay won four of its next five matches and slowly worked its way up the table. The Rowdies earned 24 points from their first 16 games and an improved haul of 29 points from their last 16.

“About the time of the Cincinnati game is where we turned it around,” Rowdies forward Georgi Hristov said. “Every new team needs time to build chemistry and figure out how they play. I think we had a lot of new players and it took us until that game to get our identity figured out.”

Now, the Rowdies head into another match with Cincinnati on a seven-game unbeaten run. The next longest unbeaten streak in the Eastern Conference is the Rochester Rhinos’ four games. Six of those games came in a span of just 20 days, forcing the Rowdies to rotate the squad and test their depth.

“You can just tell there’s a different atmosphere in the air when the playoffs come around,” Collins said. “The mood is good and we’ve got a bit of momentum. It’s a mix of anticipation and excitement for the game. … We’ve used a lot of players in the last 20 days. It’s not just that we have 11 or 12 players going in with good performances, we’ve got maybe 16 or 17 players who have all really contributed with good performances recently.”

Momentum is nice, but, in the playoffs, it can all come to an end in an instant. Saturday night’s match must provide a winner, so it will go to thirty minutes of extra time if tied after regulation. If still tied after 120 minutes, the winner will be determined by penalty kicks. The winner will advance to the Eastern Conference Semifinals against the winner of No. 2 Charleston Battery and No. 7 New York Red Bulls II next weekend.