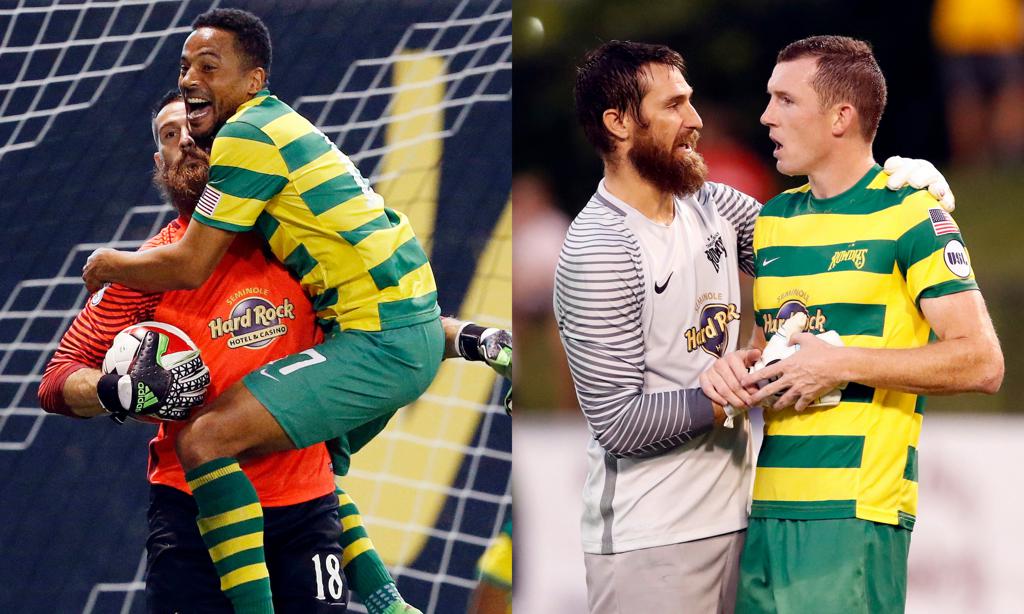 Presuming he’s selected as the starting goalkeeper for Saturday night’s tilt against the Harrisburg City Islanders, Pickens will make his 100th appearance for the Tampa Bay Rowdies, becoming just the fifth player to do so in the Modern Era.

Pickens joined the Rowdies prior to the 2014 season after successful stints in Major League Soccer with the Chicago Fire and Colorado Rapids. He also had a spell with England’s Queens Park Rangers earlier in his career.

Since then, Pickens has made 99 appearances for the club and is poised to hit the landmark this weekend. No one knows Pickens better than the two center backs who have played in front of him most frequently — Neill Collins and Tamika Mkandawire.

Pickens, 35, is a man full of anomalies.

He looks tough and intimidating with his 6-foot-3-inch frame and trademark bushy beard, but he’s a gentle giant to his teammates.

He isn’t always loud or demonstrative on the field, but every one of his teammates calls him a leader without hesitation.

“He’s a very commanding goalie,” Mkandawire said. “He’s got a huge presence in the box and, for me, he’s a great help coming out for crosses and being very vocal. I can’t ask much more of him, to be honest.”

Pickens himself had only been in Tampa Bay for a few months when Mkandawire arrived in the summer of 2014, but no one made Mkandawire feel more welcome than Pickens. Most of Pickens’ 99 appearances have come with Mkandawire in front of him. They’re road roommates during away games.

“I think this means a hell of a lot to him,” Mkandawire said. “He came here just before I did and we’ve seen the club grow a lot together. He’s managed to stay here for four seasons, which says a lot about him and how hard he works. He’s a great guy. We’re roomies on the road. He’s a family guy that helped me a lot when I first came in.”

Pickens has a knack for watching large portions of the match go by with no action as the Rowdies dominate possession, but then coming up with the big save on the opponents’ rare counterattack. His record against penalty kicks is phenomenal.

“He’s just got this aura about him on penalties,” Mkandawire said. “You’re not supposed to save penalties, but he does it so often. It’s kind of weird. I don’t know what it is about him. Obviously, he’s a big guy and takes up a lot of the goal. It could be the beard. He just has a huge presence back there.”