Lowe: It's Been A Good Year 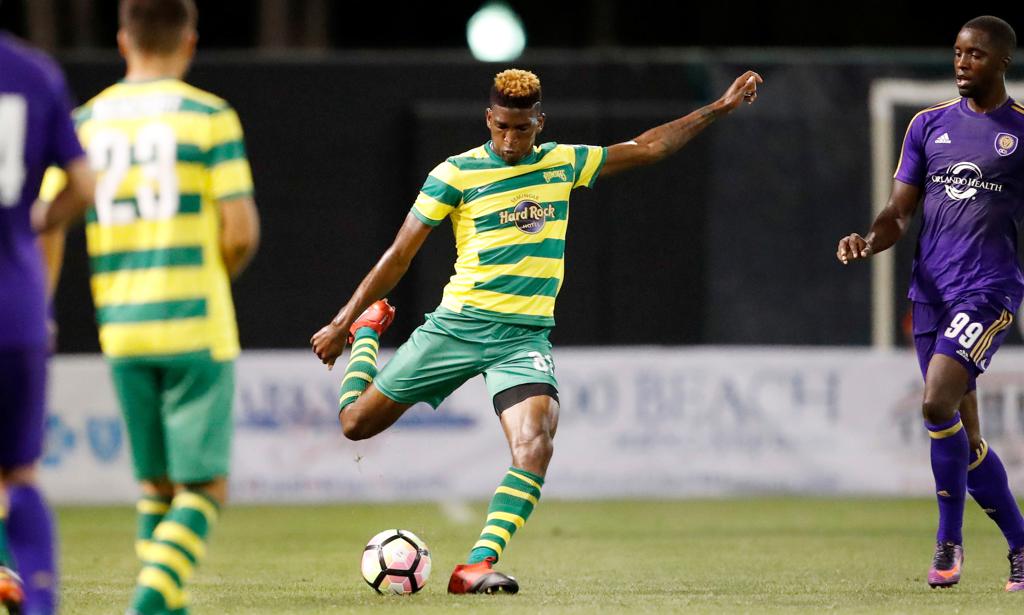 Lowe, 23, signed with the Rowdies on January 16 and it’s been all good times ever since.

Shortly after joining Tampa Bay, Lowe was called up the Jamaican National Team for friendlies against Honduras and the United States.

Against Honduras in Houston on February 16, Lowe scored his first goal for the Reggae Boyz.

After re-joining preseason camp with the Rowdies following his stint with Jamaica, Lowe quickly established himself as a key contributor.

“It’s been a good year so far,” Lowe said. “Getting into the national team was a boost for me as I came into preseason. I scored my first goal for Jamaica and signed with the Rowdies. I’ve jelled with the team and I’m happy. Life is good.”

On Saturday night against Toronto FC II, Lowe scored his first goal for the Rowdies, a thumping header from seven yards out. He immediately sprinted across the field to the Rowdies bench to hug his teammates and Head Coach Stuart Campbell.

Lowe has only scored four goals in his 49 club matches since 2014, but if you ask him, he knew he was going to score Saturday night.

“It’s a trend,” he said. “Every season I play, I always score in the second game of the season. It was a good feeling because the fans came out to support the team and to score for them feels amazing. I ran to the bench to show my appreciation for Stu and for the team.”

Scoring is nice, but Lowe’s true impact on the Rowdies’ perfect start to the season has been in his defending. The Rowdies have yet to concede a goal this year and, astonishingly, Tampa Bay has only allowed two shots on target in 180 minutes.

“Damion’s been excellent so far,” Lowe’s center back partner Neill Collins said. “The goal on Saturday was a great bonus, but his all-around defensive play is what he’ll be judged on and he’s been very good so far.”

Collins predicts that as the season progresses and his partnership with Lowe matures, the team will only get stronger.

Lowe and Collins figure to be back in action together this Saturday night when the Rowdies welcome their old foe, the Ottawa Fury FC, back to Al Lang Stadium for their first meeting as members of the United Soccer League. The night will also include a post-game fireworks show! For tickets, call (727) 222-2000 or click here.