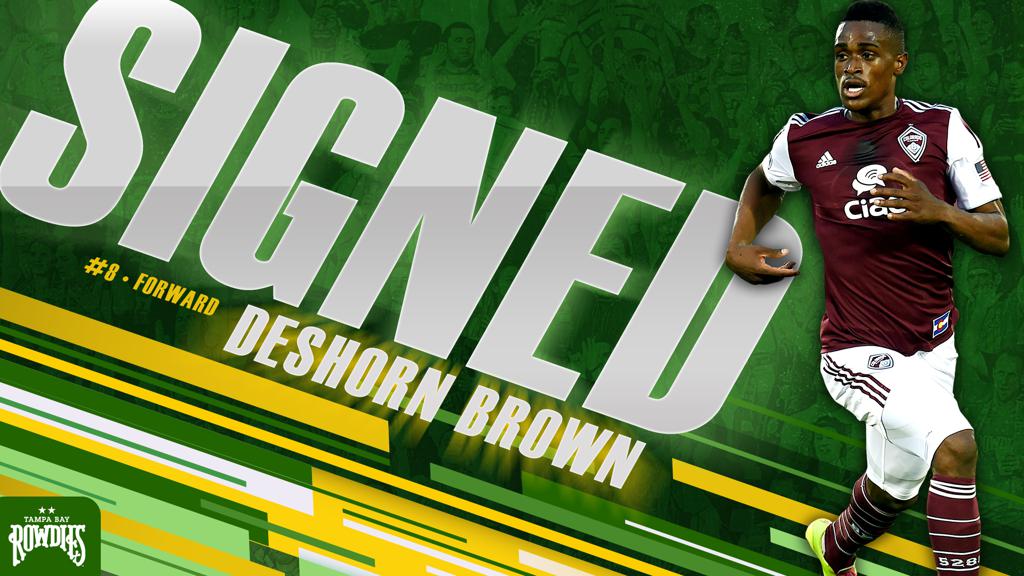 Brown, 26, most recently played for Shenzen in China League One, where he scored seven goals in 14 matches.

“Everyone saw the impact Deshorn made on our team in recent matches, scoring a goal and adding an assist,” Rowdies Head Coach Stuart Campbell said. “As a coaching staff, we’ve seen much more of him in training and he’s been impressive throughout. He brings a lot of quality and experience to our front line and we’re excited to signhim. He’s another veteran voice in our locker room to guide younger players.”

Brown trained with the Rowdies as a guest player in February and March, playing in three matches, including Rowdies’ Suncoast Invitational matches. Brown tallied a goal and an assist in the 2-1 win over the Montreal Impact on February 25.

“I am excited to join the Rowdies,” commented Brown. “The environment and the setup at the club is really professional, which is one of the reasons why I decided to sign here. I like to work hard and help the team, with the main goal of doing my job, which is scoring goals.”

Factoring in his amateur career with the Des Moines Menace (nine goals in 10 appearances) and Reading United (13 goals in 13 appearances), Brown has averaged 0.32 goals-per-game or better at every club he’s played for.

Brown attended the University of Central Florida and has made 14 appearances for the Jamaican National Team.

Join the Rowdies on Thursday, March 23 for a free season kickoff party at the Mahaffey Theater. All the fun kicks off at 7 p.m. RSVP to the event by emailing RSVP@RowdiesSoccer.com.