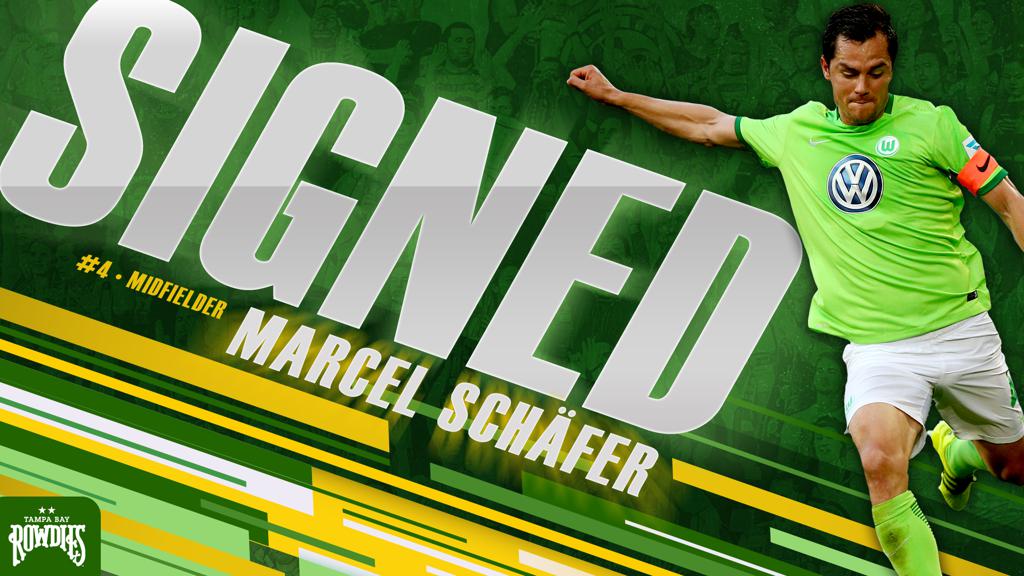 Schäfer, 32, joins the Rowdies after spending 10 seasons with German Bundesliga’s VfL Wolfsburg. Since signing with Wolfsburg in 2007, Schäfer has gone on to set the club record for most Bundesliga appearances by a field player (256). Originally born in Aschaffenburg, Germany, Schäfer scored 13 league goals and picked up 39 assists in his time with Wolfsburg.

“After a 14-year career in Germany, I am very excited to take a new step in my life,” said Schäfer. “It will be a great experience for me and my family. I am very excited to join the Rowdies and take on a new challenge in my playing career. I love to work hard, with the goal of winning games and being successful. The Tampa Bay Rowdies is a great project, and it is an honor to be a part of this club.”

Prior to his decade with Wolfsburg, Schäfer only played for one other club at the senior level, TSV 1860 Munich from 2003-2007.

“We’re delighted to bring in a player of Marcel’s caliber and expertise to our squad,” Rowdies Head Coach Stuart Campbell said. “His career speaks for itself. He’s played at a high level for a long time and we think he’ll adapt to our club and our league pretty quickly.”

Primarily a left back at Wolfsburg, Schäfer is expected to compete for a spot in the midfield with the Rowdies.

In the 2008-2009 Bundesliga season, Schäfer appeared in all 34 league matches as Wolfsburg was crowned champions ahead of Bayern Munich. Schäfer also broke into the German National Team in 2008, making eight appearances for Die Mannschaft from 2008 to 2010.

Schäfer was also a part of the Wolfsburg squad that won the 2014-15 DFB Pokal (German Cup) with a 3-1 victory over Borussia Dortmund in the final. The Wolves would later go on to defeat Bayern Munich in penalties in the 2015 DFL-Supercup.

Join the Rowdies on Thursday, March 23 for a free season kickoff party at the Mahaffey Theater. All the fun kicks off at 7 p.m. RSVP to the event by emailing RSVP@RowdiesSoccer.com.