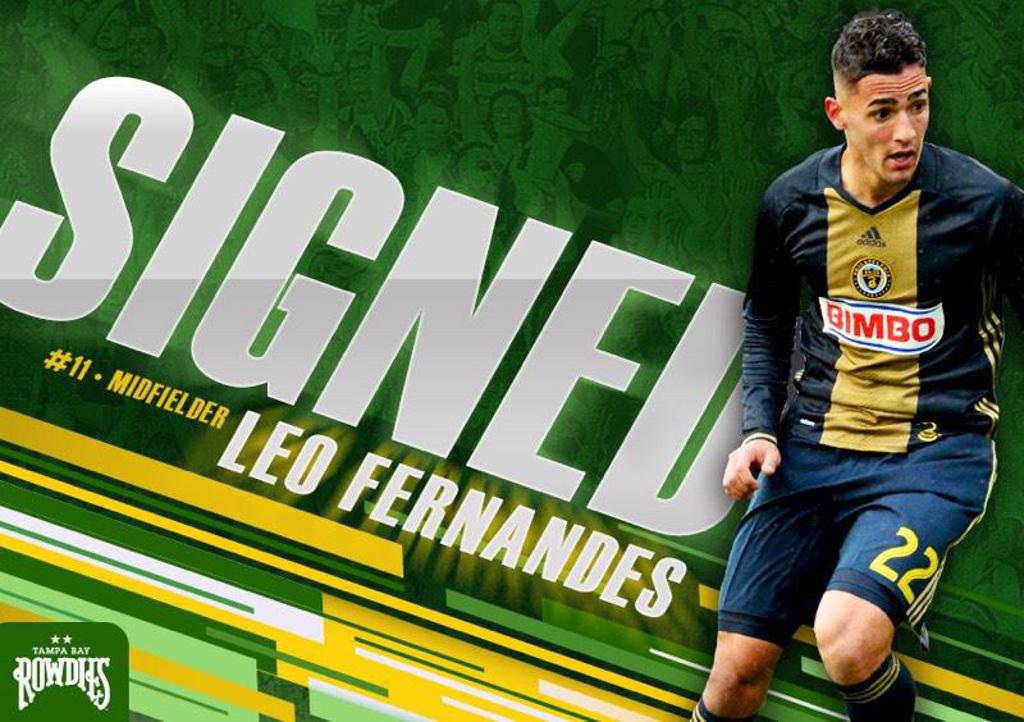 Fernandes, 25, joins the Rowdies after spending last season in Major League Soccer with the Philadelphia Union. Fernandes had been with the Union since 2013, but had been sent on loan multiple times including to the New York Cosmos in 2015.

While with the Cosmos that season, Fernandes was selected as the North American Soccer League’s Young Player of the Year. That season, he played in 28 matches for the Cosmos, scoring eight goals and tallying three assists while helping New York to the NASL Championship.

“Leo is a player that we’ve been watching for a while because he was so impressive for the Cosmos in 2015,” Rowdies Head Coach Stuart Campbell said. “We’re excited to see what he can do for the Rowdies given his experience. He’s a quick player that gives us width and he can pop up and score a few goals, too, which is always nice.”

Born in São Paulo, Brazil, but raised in New York, Fernandes played his college career at Stony Brook University from 2009 to 2012, where he earned the title of the Seawolves’ all-time leading points scorer.

The Union selected Fernandes 62nd overall in the 2013 MLS Supplemental Draft and he split his time between the Union and the USL’s Harrisburg City Islanders that season.

Fernandes made his mark on Philadelphia’s first team in 2014, scoring twice in 13 appearances, but again spent part of the season on loan with the Islanders.

After his impressive 2015 showing with the Cosmos, Fernandes rejoined Philadelphia for 2016, splitting his time between the first team in MLS and the Union’s USL team, the Bethlehem Steel. Fernandes made 12 appearances for the Union last year and 14 (all starts) for the Steel. He scored one goal for Bethlehem.

The best way to show that Tampa Bay is ready for a Major League Soccer franchise is to secure 2017 season tickets. For information on how to become a 2017 Season Ticket Member, call (727)222-2000 or click here.