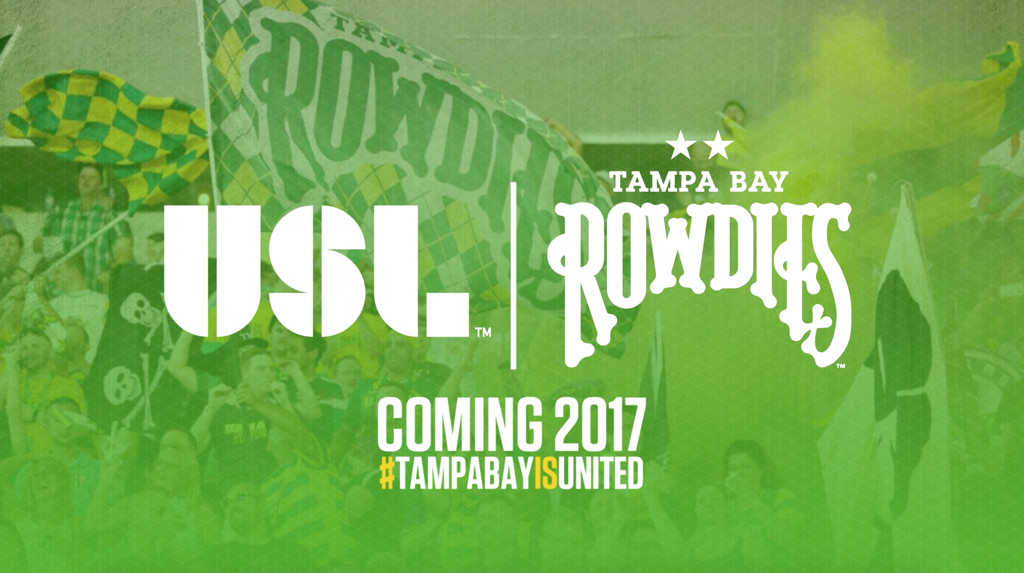 ST. PETERSBURG, Fla. (Tuesday, October 25, 2016) – The Tampa Bay Rowdies announced today that the club will be joining the United Soccer League (USL) for the 2017 season.

“We are excited to join the United Soccer League in 2017,” said Rowdies Chairman and CEO Bill Edwards. “I have said from the day I acquired controlling interest in this club that I wanted to make it one of the most successful teams in North America. The USL is a vibrant league, and this move is a necessary and positive step toward reaching the long-term goals and objectives of the club.”

“With our league headquartered in Tampa, we are pleased to welcome the Rowdies to the USL for next season,” said Alec Papadakis, the Chief Executive Officer of the USL. “This allows us to expand our footprint into the Southeast with a storied soccer brand while meeting our key tenets of market size, committed local ownership and stadium development. In Bill Edwards, we have a dedicated local owner who has invested heavily in the team’s stadium, front office and media efforts and is considered one of the marketplace’s top business and forward-thinking leaders. Bill is a renowned philanthropist and has donated significant money for children and veterans causes.”

The just completed 2016 season saw the USL record a total attendance of almost 1.5 million for its 29 teams, a 33 percent increase from 2015. The USL has more than doubled in size since 2014 and has built a stable, highly-competitive professional soccer league positioned for long-term success. The 2016 season featured the introduction of six teams and the League will also welcome Reno 1868 FC in 2017 and Nashville SC for 2018, with additional expansion on the horizon.

The USL’s teams are divided into two conferences - Eastern and Western - with each team playing 32 regular season games for the 2017 season that kicks-off on the weekend of March 24-26. The Rowdies are expected to be placed in the USL’s Eastern Conference.

About United Soccer League
The United Soccer League, the longest-standing professional affiliate member of U.S. Soccer, is the largest professional soccer league in the United States and Canada, and the world, currently with 29 teams in 19 U.S. states and three Canadian provinces for the 2016 season.  The USL has more than doubled in size since 2014 and built a stable, highly competitive professional soccer league on a national footprint with strong ownership groups in major markets positioned for long-term success.

The 2016 season has marked the introduction of six teams - Bethlehem Steel FC, FC Cincinnati, Orlando City B, Rio Grande Valley FC, San Antonio FC and Swope Park Rangers. The league has confirmed the addition of Reno 1868 FC in 2017 and Nashville FC in 2018. The USL’s teams are divided into two conferences - Eastern and Western - with each team playing 30 regular season games. In addition to league play, USL teams compete in the Lamar Hunt U.S. Open Cup as well as various domestic and international exhibitions.