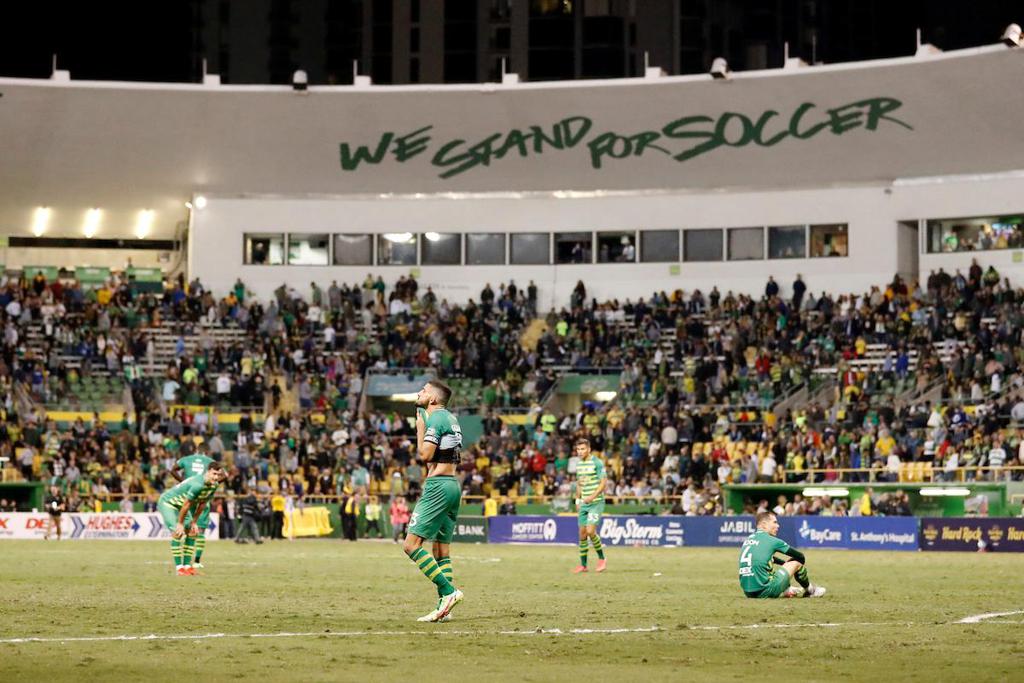 ST PETERSBURG, FL (November, 28 2021) - The Tampa Bay Rowdies 2021 season came to a heartbreaking end on Sunday night in front of 7,251 fans at Al Lang Stadium, as the club fell 3-1 to Orange County SC in the USL Championship Final.

After allowing the visitors to notch three goal in the first 45 minutes, the Rowdies found themselves in a hole they could never dig themselves out of.

“There will be a few regrets from a couple of players I’m sure, but they’ve done this club so proud,” said Rowdies Head Coach Neill Collins. “It’ll either break you or make you stronger, and (our guys) ... it’ll make them stronger.”

Tampa Bay held possession throughout the opening stages of the match and wingbacks Leo Fernandes and Sebastian Dalgaard found space out wide to play crosses in, but Orange County’s defense held firm to deny any quality connections on the service.

However, the Rowdies found their first true chance on goal in the 19th minute as midfielder Yann Ekra was taken down in the box while attempting to turn toward goal, giving his side a chance from the penalty spot. Rowdies Sebastian Guenzatti stepped to the spot and struck his attempt to the left, but keeper Patrick Rakovsky dove the same direction and managed to parry the effort away.

Just six minutes after the penalty chance, Orange County jumped ahead on a mistake at the back by the Rowdies. After receiving a pass from keeper Raiko Arozarena -- starting in place of the injured Evan Louro -- right center back Jordan Scarlett attempted to play the ball back to the center of the field for his teammate Forrest Lasso. The pass never reached Lasso, though, as Ronaldo Damus pounced on the pass inside Tampa Bay’s box and fired the ball into the back of the net.

Despite falling behind, the Rowdies continued to control possession and apply pressure on Orange County’s back line. Rakovsky made another stop on Guenzatti from a one-timed blast in the box to keep the Rowdies from equalizing.

“I’ve had them go in before, today it didn’t. Not my best game either,” said Guenzatti. “I thought we dominated the whole game, I thought we played really well. But we didn’t take advantage of our chances, they did, and they won.”

Orange County made the most with what little possession the club had and doubled the lead in the 38th minute. After Eric Calvillo played a ball in from the right flank for Damus, the striker utilized the window of space in the center of the box to trap the ball and send a strike into the bottom left corner. As the halftime whistle neared, Orange County added another goal off a set piece after Tampa Bay’s Laurence Wyke was whistled for a foul on Calvillo 25 yards out from goal. Mikko Kuningas delivered the dagger with a well-struck free kick that curled past the left side of the wall and into the net.

Fernandes gave the Green and Gold a glimmer of hope in the 57th minute as he blasted a loose ball through a couple defenders to get the Rowdies on the scoresheet. Fernandes was forced to exit shortly after the goal due to injury and the Rowdies turned to the bench looking for a rally. The Rowdies found their chances, with right wingback Dayonn Harris offering a noticeable spark with dangerous crosses played into the box. Substitute Lucky Mkosana was a threat inside the box, yet the striker could not pull the Rowdies any closer as he had two promising headers saved by Rakovsky and was whistled offside on another chance when he did manage to beat the keeper.

“Who prepares you for being 3-nil down at halftime in a Cup final? Highly unusual,” said Collins. “We wanted to get a goal, we got the goal at a great time. We knocked the door down, but the boys put in so much energy, (and) we fell short. But we put ourselves behind the eight ball with a couple of things that we did in the first half.”

The defeat is a bitter pill to swallow for the Rowdies who finished as the top team in the regular season, but now must wait until 2022 to try again for their first USL Championship Cup Trophy.