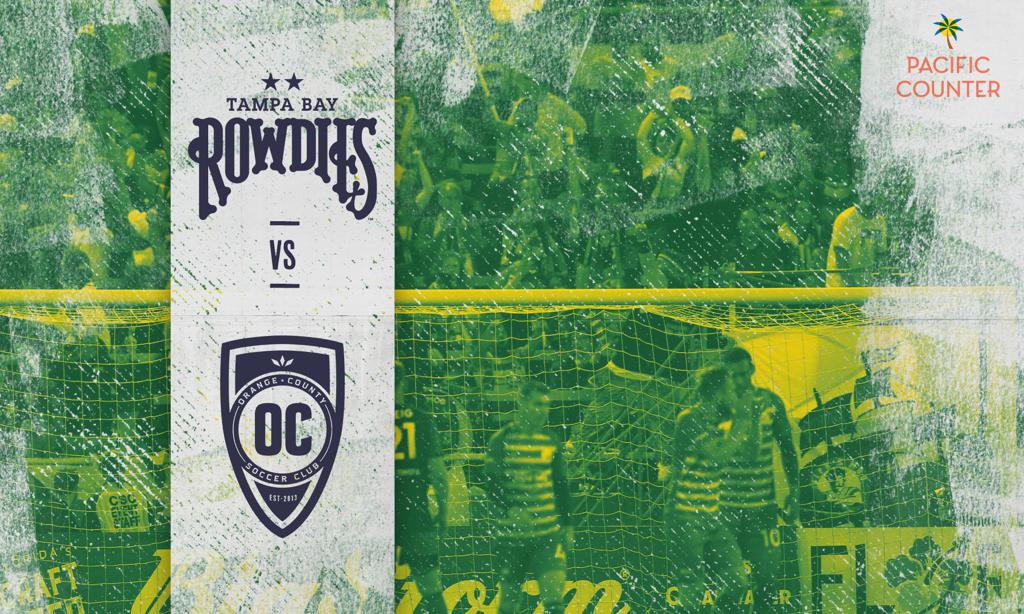 Watch: The match will be broadcast on ESPN, ESPN Deportes and Sirius XM FC

The Tampa Bay Rowdies are back in the USL Championship Final this Sunday night as they host Orange County SC at Al Lang Stadium, with the game set to air nationally on ESPN, ESPN Deportes, and SiriusXM FC at 8:30pm ET.

This match has been a long time coming for the Rowdies, especially for those who were the team in 2020 when that year’s championship final was cancelled due to the pandemic. After over a year of waiting, though, the Rowdies will finally get their shot at lifting to add a USL Championship Cup to the mantly.

Starting center back Forrest Lasso, who picked up his second straight USL Championship Defender of the Year award and his third overall this week, the focus is squarely on seeing this season all the way through to be the last team standing and not last year’s disappointment.

“It’s been an elephant in the room, in this league, in this club,” said Lasso. “There’s no hiding from that. We definitely think about it, but we did all the hard work to get to the point of having another championship opportunity. And we’re focused on Sunday and getting the job done.”

While the Rowdies enter Sunday’s match as back-to-back Eastern Conference championship after a thrilling 3-2 comeback win over Louisville City FC in front of 7,120 fans at Al Lang Stadium, Orange County SC’s is making an appearance in the USL Championship Final for the first time in club history. Orange County’s road to this year’s final has been paved with sturdy defensive organization that has led them to concede only twice in their last 8 matches. After finishing scoreless through 120 minutes of soccer in the Western Conference Final versus San Antonio FC, Orange County prevailed 5-2 on penalties to advance.

“I think Orange County the last two or three months have been a very difficult team to beat,” said Rowdies Head Coach Neill Collins. “I think like ourselves, they’re a very good team. By that I mean they play together as a team, they don’t just rely on one individual, they’re a collective, well-coached team, so we’ll need to make sure that we’re prepared for all their threats, but particularly the fact that they’re a very well-organized unit.”

Reunited On Opposite Sides

Leading Orange County for this weekend’s championship final a face familiar to Rowdies Head Coach Neill Collins. Orange County’s Richard Chaplow and Collins were teammates for a six-month stretch at Preston North End FC just over a decade ago. Chaplow even assisted Collins on his lone goal for Preston North End in a 2-1 win over Ipswich Town FC.

“I wasn’t teammates with him for long, I think it was seven or eight months, because I wasn’t very good that season,” Collins joked, “but what a funny guy. Great teammate, me and Richard were close in a good group of teammates at that time.

“As a player, he was full of energy, full of quality, the type of midfielder I’d like to have in our team. Kinda close to like a Lewis Hilton, but who could get you running forward. A really good player and always a threat in terms of scoring a goal or two.”

This weekend, the two meet as opponents who have taken similar paths to get to their current positions. Like Collins did in 2018, Chaplow has taken on head coaching duties midway through the campaign.

“I can see over that time his aspirations to coach have really grown, and he’s really become engrossed in becoming a top coach,” said Collins. “I’ve had some great conversations with him over the past couple of years about his experiences, my experiences, we’ve shared information about the league. It’s just great to have the chance to play against each other in such a big game, and just hearing him speak about it, how passionate he is about it, you can tell he’s in the right job and Orange County have done well to get someone of his quality and someone of his hunger, which I think is important.”

Al Lang in the National Spotlight

For the first time in USL Championship history, the league’s marquee event will be broadcast nationally on ESPN and ESPN Deportes, which also means Tampa Bay’s Al Lang Stadium will get the national stage as well. Those tuning in at home are certain to be treated to a raucous atmosphere at Al Lang. Another capacity crowd will be on hand to watch the Rowdies try for their third league title in club history.

While the Rowdies would like to avoid the necessity of a dramatic late-game comeback, the environment at Al Lang for last week’s Eastern Conference Championship was a great taste at what could be in store this Sunday under the bright lights of ESPN.

“I mean it was unreal (last week), one of the best atmospheres I’ve been a part of in my entire life,” Lasso said. “...Everyone this side of the U.S. on the East Coast is trying to come to this game, because they can feel the energy and the spirit.”

Sunday is set to be the first time Tampa Bay and Orange County face off on the field, yet the Rowdies’ interconference schedule this year afforded them the chance to match up with three of Orange County’s frequent divisional foes Phoenix Rising FC, Las Vegas Lights FC, and Oakland Roots SC. The Rowdies came out on top in all three of those matchups, possibly giving them a little confidence heading into their showdown with Orange County.