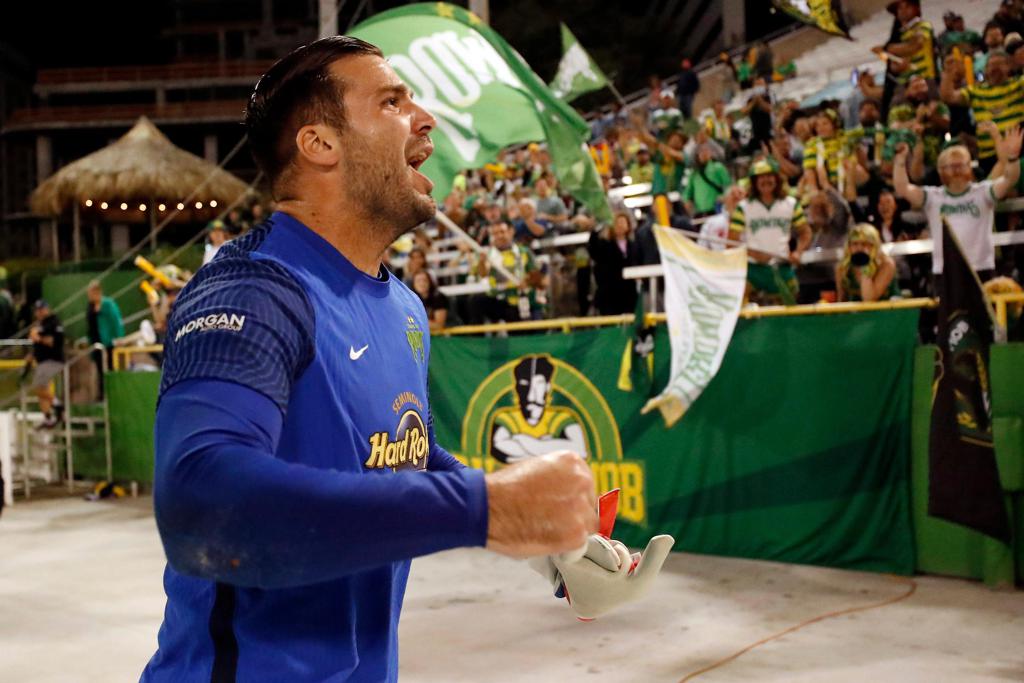 ST PETERSBURG, FL (November, 26 2021)  – Tampa Bay Rowdies keeper Evan Louro can add another award to his mantle for his standout 2021 USL Championship season. Following his Golden Glove award for posting a league-low 0.74 goals against average, Louro was named USL Championship Goalkeeper of the year by the league on Friday.

Louro, 25, started in 31 of Tampa Bay’s 32 games during the regular season, helping the side earn the best record in the regular season to place them in good standing to earn their spot in Sunday’s USL Championship Final at Al Lang Stadium (8:30 p.m. ET | ESPN | ESPN Deportes | SiriusXM FC).

“This award is obviously a huge honor,” said Louro. “I just give credit to my teammates for making my job easy this year. But this award is something I’ll keep with me forever. No-one will ever be able to take this accomplishment away from me.”

While Tampa Bay’s sturdy defense allowed the fewest shots on goal this season, Louro still managed to show up in net when it mattered most and did a deft job pulling the string in the back to keep his side organized.

“I always try to keep myself busy,” Louro said. “My job is not only making saves, it’s talking, it’s playing out of the back, it’s making sure our guys are tuned in. Just me doing that helps keep me tuned it. I’ll maybe have days where I don’t really have to do anything and then I’ll just have to do one thing and I need to be ready to that. That’s what comes with the job and I’m happy to do it.”

In his second season with the Rowdies, Louro managed to continue on at the same high standard he established for himself in 2020. Louro recorded a league-high 14 clean sheets, the second highest regular-season tally by a keeper in league history. He also finished the regular season with a save success rate, improving upon his 65.5 rate in the 2020 season despite playing twice as many games.

Louro’s value in net was on clear display during the Rowdies’ recording-setting streak in the latter half of the regular season campaign. With Louro acting as general in the defensive third, the Rowdies went 891 minutes without conceding a goal, a record that is likely to stand the test of time for seasons to come. In that stretch, Louro matched the league record of 8 straight clean sheets, helping to put his club in a position to claim the top overall seed in the postseason.

“I grew up watching Manchester United and the thing that kept being mentioned about Peter Schmeichel, who at the time was the best in the world, was he would go three matches without making a save in a game and then when the time came, he’d make the right save,” said Rowdies Head Coach Neill Collins. “I think that’s just about focus. Evan is an intense person, and I think that’s what you need to be. I think the greatest thing with Evan is not just the shot stopping but when the pressure is coming, to be able to relieve pressure. I think he’s done that really well. The last two years when you look at his record, it says a lot about why he’s won this award.”

Beside Louro's obviously talent and skills in net, Collins believes the keeper's overally attitude makes him an invaluable part of club.

"Evan’s mentality is what makes us better as a team and as a club," said Collins. "Evan thinks he can do anything. He’s got this real inner belief that he can do anything, and he can influence anything. Sometimes we have to try and rein him back, otherwise he would be taking free kicks, corners and penalties."

The 2021 USL Championship Awards were voted on by team technical staffs and executives and a league-wide media panel that included representation from every USL Championship market. Voting was conducted following the conclusion of the 2021 Championship regular season.