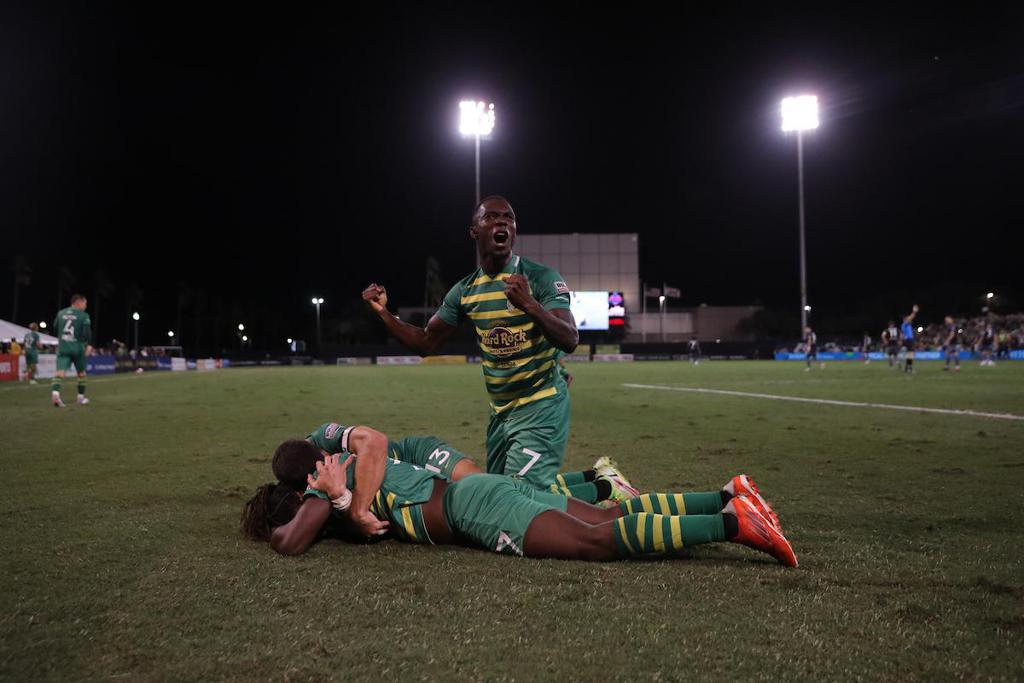 In front of 7120 fans at Al Lang Stadium, the Rowdies’ reliable super substitute came through once again in the postseason, notching two goals for the Green and Gold to force the match into extratime, where Steevan Dos Santos secured the game winner to finish 3-2.

Tampa Bay’s night did not start as magically. Just 10 minutes into the match, Louisville’s Oscar Jimenez lifted a well-struck free kick into the box for Brian Ownby to volley into the back of the net. Things went from bad to worse for the Rowdies in the 23rd minute when Forrest Lasso had a mishap trying to clear a low cross sent in from the left by Paolo Del Piccolo and ended up sending the ball into his own net.

Hilton earned the Rowdies their first look at goal of the night at the half hour mark, driving a free kick from 22 yards out onto frame. Keeper Chris HUbbard, though, was on hand to make the stop.

Rowdies keeper Evan Louro was called on to make a courageous stop at the near post to deny Jorge Gonzalez a minute into the second half.

The Rowdies gradually began to ramp up the pressure on Louisville in the second half, yet a goal continued to elude them until the 83rd minute. After a flurry of chances inside the box were all blocked, the ball fell for Mkosana outside the box. Wasting no time, Mkosana drilled a low strike into the bottom right corner.

As the clock ticked down to the final whistle, Mkosana managed to get the equalizer on the final touch before the whistle. After a chipped cross from the right edge of the penalty area by Aaron Guillen found Forrest Lasso in the left edge of the six-yard area. Lasso then sent a hail mary of a cross back across goal where Mkosana was waiting to pounce with a powerful header across the line.

With momentum on their side, the Rowdies were able to find the go-ahead goal in extra time. In the 102nd minute, Laurence Wyke delivered a pinpoint cross from the right flank that dipped down in front of Louisville’s goal, where Dos Santos was waiting to head the ball home.

The Rowdies will play the winner of San Antonio FC and Orange County FC’s Western Conference Final matchup. That match will be played at Al Lang Stadium on Sunday, November 28 at 8pm ET. Tickets for the match can be purchased here.