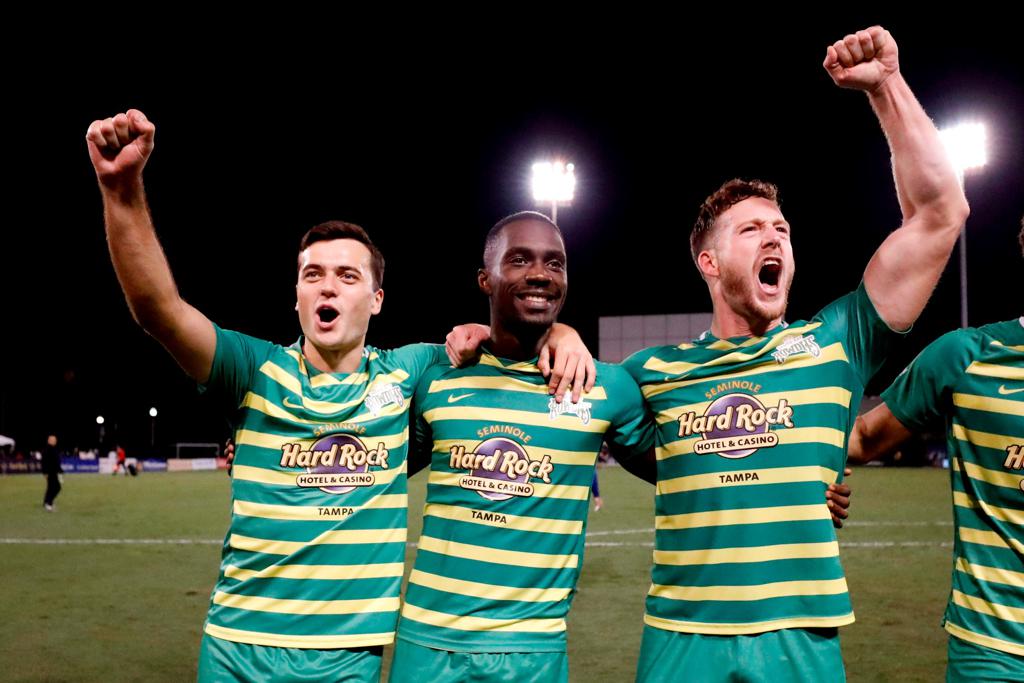 ST PETERSBURG, FL (November, 13 2021) - The Tampa Bay Rowdies are set to defend their Eastern Conference title next Saturday At Al Lang Stadium after edging out Birmingham Legion FC 1-0 through a second-half strike from Yann Ekra.

“Everyone played their role tonight and we ended up with a 1-nil win, and it was well deserved against a really tough side," said Rowdies Head Coach Neill Collins.

Tampa Bay came out with a level of intensity that nearly earned them a goa-ahead goal in the first 5 minutes. Ekra probed Birmingham’s net in the 4th minute, firing a shot that required keeper Matt Van Oekel to parry it out for a Rowdies corner kick. On the ensuing set piece, Van Oekel punched the service out of the box and the ball sailed to Laurence Wyke. The Rowdies midfielder scuffed a volley off the grass that bounced over Van Oekel but was headed off the line by JJ Williams.

After that early stretch of pressure, the match evened out as both sides produced a spare amount of half chance in the first half. A tame effort Prosper Kasim at a tight angle was handled by Rowdies keeper Evan Louro in the 11th minute. In the 23rnd minute, Leo Fernandes had a strike from the left edge of the box thwarted by Van Oekel.

Collins held off from making any changes through the first hour and his patience paid off in the 57th minute.

"Even for myself tonight, I kept telling myself you’ve got to be patient with our subs because we might have to go into overtime," said Collins. "Just keep going, if we need to add on fresh legs we have Dayonn Harris, Lucky Mkosana.  But we got the breakthrough and I know when we go ahead we can do a great job.”

Tampa Bay’s breakthrough finally came in the 57th minute, with Ekra and Conner Antley combining to swiftly move the ball down Birmingham’s half. Ekra initiated the sequence by shielding the ball away from a defender and slipping a pass to Antley out onto the right wing. Antley then drove toward the box before picking out Ekra in the middle of the box. Ekra deftly trapped the ball with his first touch before turning to deposit the ball into the bottom left corner.

“I asked Yann for 10 percent more at halftime because we think so highly of him. He told me that was about 10 percent more,” said Collins. “What a player, and he and Conner combined so well for the goal. It was a goal worthy to win the game.”

The visitors pushed for a late equalizer yet were only able to produce a header lacking power in the 73rd minute off a corner kick which Louro was easily able to handle. Fernandes came close to doubling the lead shortly after that, but Van Oekel made an outstanding diving stop to keep the match within reach.

Ultimately, though, the Rowdies closed the match out on top without allowing any serious threats to their net.

“It's a great advert for the league, two fantastic teams go head to head," said Collins. "We’re happy to be at this stage, we’re happy to have the game at our stadium. We’ll prepare like we have for every team. We’ll go through the same processes. The players are bought in to doing the same.”