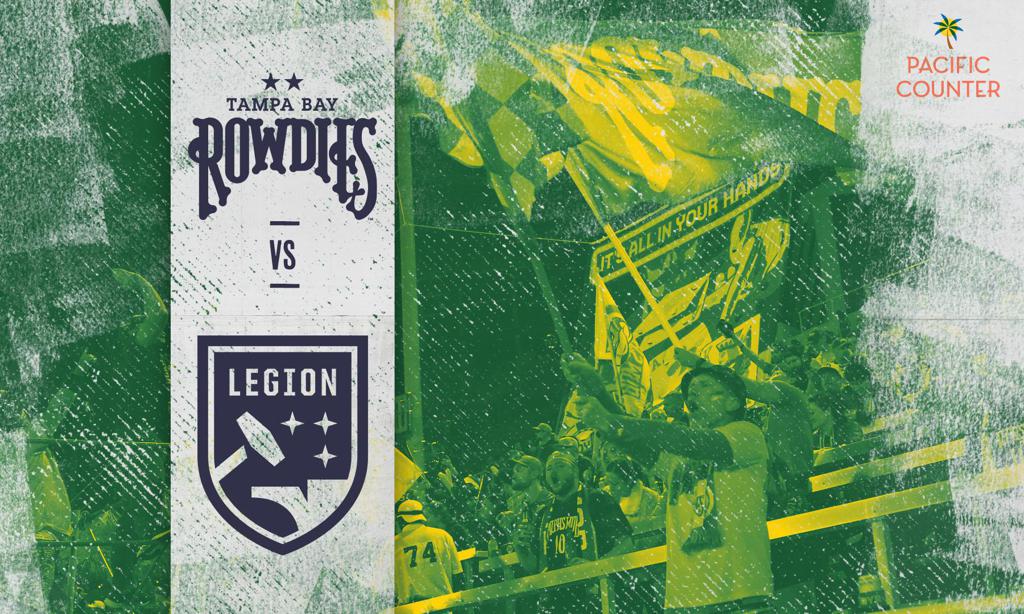 Tickets: Tickets for the match can be purchased here.

Watch: The match can be stream on ESPN+ here.

The Tampa Bay Rowdies continue their quest for a USL Championship title this Saturday in the Eastern Conference Semifinal versus Birmingham Legion FC. This will be the first meeting of the year between the two sides, but it won't be the first time they have met in the playoffs.

Birmingham arguably gave the Rowdies their toughest test of the 2020 playoffs. After jumping out to a two-goal lead at Al Lang Stadium, the Rowdies conceded twice to allow the visiting Legion a chance at coming out on top.  Ultimately the Rowdies ran away in the latter stages to win 4-2, though.

“They gave us a big scare being two-nil up and they came back and got two goals,” said Rowdies Head Coach Neill Collins. “At that point you’re fearing the worst. (Birmingham Head Coach Tommy Soehn) of course has looked at that and made adjustments, but of course they’re a different team this year. They’ve progressed, they’ve grown, they’ve added players.”

Collis added that while last year's playoff game isn't "irrelevant," the truth is both teams have progressed since then. Like the Rowdies, Birmingham has built on the success of last season to grow into an even stronger side this season. Birmingham pushed Louisville City FC for the top spot in the Central Division until the very last match of the regular season. After the disappointment of losing out on a home playoff game due to the cancellation of their match against Pittsburgh Riverhounds SC in last week’s Quarterfinal round, Birmingham will be eager to get out on the field.

“They’re a very well organized team and I think since last year they’ve improved and added some really good attacking players,” said Collins. “They’ve kept good continuity in their squad and then they’ve added at the back end of the field with Phanuel Kavita and Thomas Vancaeyezeele. They’re a top USL roster and a well-coached team as well. It’s gonna be a really difficult team at both ends of the field for us. We’re gonna have to defend the way we have all season and we’re gonna have to be creative to break them down.”

Keying in on Brett

An important piece for Birmingham and a familiar one to the Rowdies will be unavailable for Saturday’s match. Former Rowdies attacker Junior Flemmings won’t be with his Birmingham teammates and instead will be with Jamaica’s national team for FIFA World Cup Qualifying. The visitors still have a potent option up top in Neco Brett, though. Brett currently leads Birmingham with 18 goals this season, a career best for the veteran striker.

“Neco is someone we’ve played a lot over the last four or five years," said Collins. "He’s deadly in the box. Him and Sebastian Guenzatti and probably Cameron Lancaster in the Eastern Conference have probably been three of the most consistent scorers. The good thing is our center backs have played against him. They know how effective he is as a forward. Birmingham have done a great job adding players like that over the last two years. We’ll need to be at our best in the back.”

The Rowdies will need to carry the momentum from last week’s lopsided 6-2 win over FC Tulsa if they hope to get past a defensively strong Birmingham side. While the Rowdies conceded a league-low 23 goals, Birmingham ranked second best in the league by only allowing the ball into the back of the net 31 times.

Wingback Conner Antley, who assisted on the opening goal in the win against Tulsa, expects to see a well-organized Birmingham side this weekend.

“I think getting a 6-2 result against Tulsa shows the chances are there and the quality of work we put in every week,” said Antley. “We know it just comes down to putting that little moment of putting the ball in the back of the net. We go up against our own team in training every week and we like to think we train harder than any other team is going to go up against us. If we can do it in training against our own team, we have confidence we can do it on the weekend.”

Patience will be key for the Rowdies if it takes longer than hoped for to find a goal.

“I think it’s also important that if the goals don’t come, that we don’t panic,” said Antley. “And that we don’t lose our style of play, that we don’t become frantic or try to force things, then we continue to play our game and even if it's 0-0 in the 70th, 80th minute, keep playing our game and the chances will come and eventually we’ll get a goal.”

As last week's playoff matches showed, things won't always go your way, even if you are the odds on favorite to win. For Collins, though, what his squad has shown is a determination to adapt to any challenges thrown at them by an opponent.

"The challenge is trying to figure out what someone’s going to do to stop you," said Collins. "Can you prepare for that? Can your players adapt to that? Our guys have been really good at finding a way. Birmingham under Tommy I’ve always found really shrewd and makes adjustments accordingly, so I’m sure they’ll have a game plan. Equally, the games that we’ve won, we’re not one dimensional. We’re not one dimensional and we’d like to think we can hurt teams in different ways."