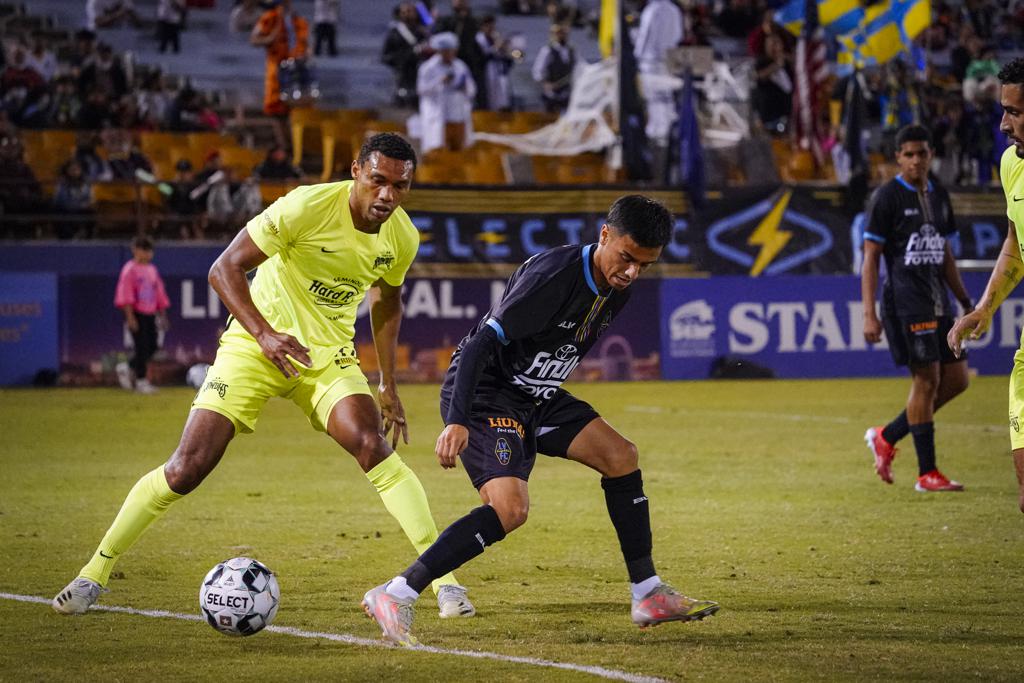 The Rowdies finished the season with 71 points, a new club record in the USL Championship and four points clear of second place Phoenix Rising FC. It is only the second time in Rowdies history that the club has finished as the top side in the regular season. The 1976 Tampa Bay Rowdies are the only other Rowdies squad to have accomplished the same.

“For me, this was a big thing,” said Rowdies Head Coach Neill Collins. “Coming from Europe, where being top of the regular season standings is so important, I think this is an important moment in getting the club to where we want to be. We want to be number one. We know that it doesn’t bring us the championship, but it gives us the best possible chance. So for me, it’s a step toward where we want to be as a club.”

Tampa Bay jumped out to an early lead over Las Vegas on Saturday. In the 12th minute, a pass from Leo Fernandes deflected off a defender but fell in a dangerous spot in Las Vegas’ defensive third. Rowdies captain Sebastian Guenzatti advanced on the ball, forcing keeper Alex Rando off his line. The ball ended up bouncing right in between both players but rolled directly into the path of Dos Santos, who buried the simple finish with Rando out of his net.

Two minutes after Guenzatti had a promising header tipped over the bay by Rando in the 22nd minute, Las Vegas found the back of the net through a bit of individual brilliance. A long ball over the top fell perfectly for forward Danny Trejo, who struck the ball off the bounce at the top of the box and sent it just over the fingertips of Rowdies keeper Evan Louro.

The hosts came close to taking the lead in the 56th minute, as Cal Jennings cut inside the box to draw Louro out before slipping a pass to Trejo. The attacker fired off a shot, but Rowdies defender Jordan Scarlett was in position to make a vital goal line clearance.

Just five minutes after Scarlett’s stop, the Rowdies went back out in front as Dos Santos netted his second. Geunzatti and Wyke combined for a give and go, springing Wyke into the box, where he centered to Dos Santos. The imposing striker quickly turned and deposited the ball into the bottom left corner.

Saturday was the second time Dos Santos has notched a brace since returning from a broken bone in his foot at the end of the summer.

“I think Steevan’s goals per game will be pretty good considering how much time he missed,” said Collins. “It's nice to see him score. We could have scored more tonight, but it's always great to see your strikers score. I always like to have the strikers scoring because I think that gives the team more confidence.”

The Rowdies now return home and intend to stay there throughout all of November for the playoffs. They host the Central Division’s fourth-place finisher FC Tulsa in the Eastern Conference Quarterfinal round of the USL Championship postseason at Al Lang Stadium on Saturday, November 6. Kick off is set for 7:30pm ET.

Fans can purchase tickets for the match here.

“We always try to follow these teams, but I think the real work on (Tulsa) starts now,” said Collins. “Honestly, once you get ahead of the game that you’ve got, you’re in trouble. We wanted to win tonight because confidence comes from winning.  Tulsa have shown they can win home and away. They’ve beat Louisville. They’ve beat Birmingham. So they’ll be a real threat.”