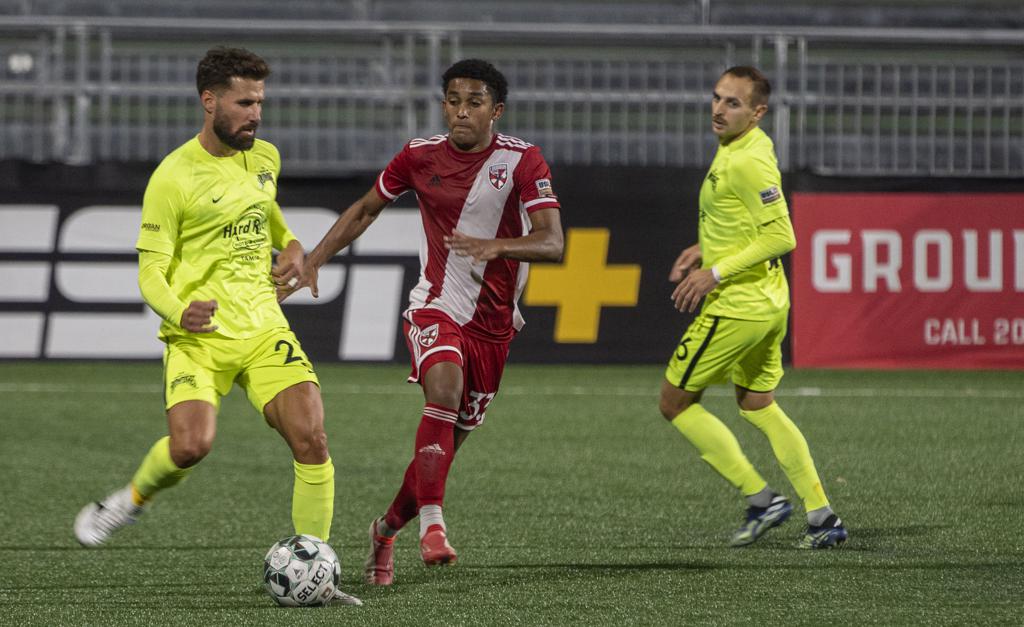 One strike from Steevan Dos Santos was all the Tampa Bay Rowdies needed to down Loudoun United FC on Saturday night at Segra Field. The 1-0 victory completed the Rowdies’ season sweep of Loudoun and kept the club in control of the race of the USL Championship’s top overall seed in the postseason.

Loudoun looked the more potent threat in the early stages and nearly snuck one by the Rowdies four minutes in as Jackson Hopkins curled a shot from the the top of the box that missed at the far post but not by much. As the half wore on, though, the Rowdies began to take hold of things, with midfielder Jordan Doherty coming close on two efforts in the 11th and 14th minutes.

“A really, really difficult game to come into on the back of a rivalry game at home on Wednesday night where we put on a great performance,” said Rowdies Head Coach Neill Collins. “Coming here where you’re expected to win against what we know can be a really difficult side. I thought the effort and the attitude were good. I just thought we were a step off in the first 15 minutes. We weren’t playing with the same energy and intensity. But once the boys raised that, we got a goal and should have had a couple more.”

When it looked as if the Rowdies would have to settle for a scoreless half, Dos Santos found the back of the net on an opportunistic chance in front of goal. After Houssou Landry fouled Laurence Wyke on the left wing, Lewis Hilton dropped a dangerous cross into the box that bounced in front of goal and toward the far post. Trying to stop Hilton’s free kick from finding Forrest Lasso on the back post, a Loudoun defender inadvertently played the ball right into the path of Dos Santos, who buried the chance to put the Rowdies up.

Rowdies captain Sebastian Guenzatti had his first chance of the night to score in the 56th minute. After a Doherty strike was blocked into the air, Guenzatti timed an overhead kick from 5 yards out well enough to get it on frame but not past Fordah.

Loudoun held most of the ball for the second half, yet the hosts could never find a way to break through and truly test Evan Louro, who was able to record his 14th clean sheet of the season and Tampa Bay’s 15th.

Wanting to ensure the Rowdies came away with a win to keep pace in the race for the top seed in the postseason, Collins held back on making many changes until late into the match. Guenzatti ended up playing the entire match and Dos Santos didn’t come off until the 90th minute.

Both Guenzatti and Dos Santos and Guenzatti came inches away from a goal on a hectic sequence in Loudoun’s box in the 89th minute. As the match reached the final whistle, the Rowdies came close to doubling the lead several times in one sequence. Wyke initiated the sequence by driving into the left side of the penalty area before crossing the ball across goal. Harris collected the pass and sent another back across goal that was deflected out into the path of Guenzatti, who fired the ball on frame only to be denied by an outstanding save by Fordah. The rebound fell for Wyke on the endline and he rocketed a shot on frame but the effort deflected off the face of a defender on the line to stay out. A follow up attempt by Harris was blocked, as was another by Hilton. On the final attempt of the chaotic sequence, Dos Santos struck the ball from close range and had Fordah beat but the attempt clanged off the post.

Tampa Bay managed to pick up Saturday’s result with two key contributors hanging back home to receive some well deserved rest. Center back Aaron Guillen and midfielder Leo Fernandes were both given the night off as the Rowdies came in on just two days rest.

“There’s obviously parts of the performance that I’d like to be better, but putting everything into context, we’ve had a busy schedule and we’ve made a lot of changes to give guys rest,” said Collins. “Having come through two games making those changes and to still pick up a couple wins is big.”

The Rowdies will now get a full week’s rest for the first time in five matches before next Saturday’s regular season finale at Las Vegas Lights FC. A win in Las Vegas guarantees the Rowdies home field advantage throughout the playoffs. A loss by Phoenix Rising FC either this week or next week would do the same.