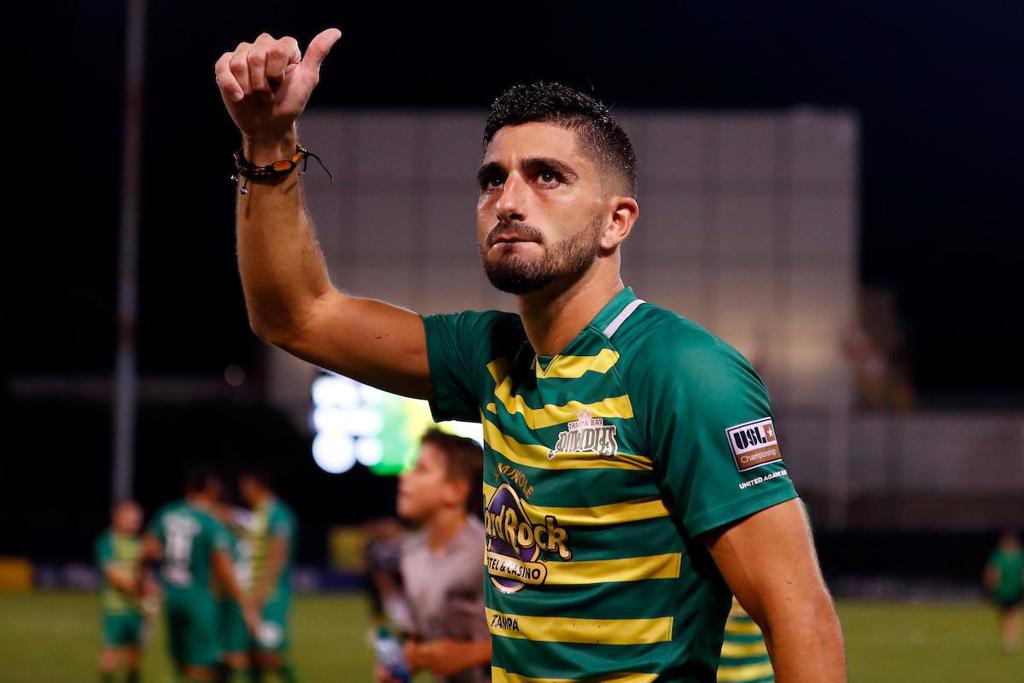 ST PETERSBURG, Fla (October 14, 2021) - Tampa Bay Rowdies forward Sebastian Guenzatti’s standout performance in the month of the September has earned the veteran the USL Championship Player of the Month award. In five appearances in September, Guenzatti notched seven goals and two assists, including braces in three straight matches. On the back of Guenzatti’s consistency, the Rowdies were able to secure a postseason berth for the third consecutive season and clinch the Atlantic Division crown.

In the midst of Guenzatti’s red-hot month, the Rowdies captain also recorded his 50th goal for the club. At the close of the month, Guenzatti stands at 55 goals for the Green and Gold, five shy of matching Georgi Hristov’s all-time Rowdies scoring record. At 19 goals on the season, Guenzatti has also matched the club’s single-season scoring record, which he set himself in 2019.

Guenzatti’s consistency in front of goal has made him a fan-favorite in Tampa Bay over the last several season. When he went without a single goal in August, the experienced attacker never lost faith that his finishing touch would come back.

“Getting that first goal was definitely a weight off my shoulders, but I was calm,” said Guenzatti. “I knew it was going to come. It happens to forwards that you go a little while without scoring, but I knew once I get the first one in, the rest were going to start coming in.”

Rowdies Head Coach Neill Collins was the one to name Guenzatti club captain in 2019, and ever since that season his estimation of the strikers has only continued to grow.

“Among us he’s held in such high regard, but maybe outside sometimes he’s a little bit underrated,” said Collins. “When you look at his goal record, it speaks for himself. For me, the previous month when he didn’t score wasn’t cause for concern because I know Seba will keep doing the things he does, and the goals will come. I think on top of his goals, his performances have just been fantastic, as has the team’s. He’s raised his level from the last couple months and it’s great to see him get the recognition.”

Guenzatti and the Rowdies need just five more points to lock up the top seed in the Eastern Conference. The club is also now in the driver’s seat in the race for the top overall seed in the postseason. With four matches left to play on their schedule, Tampa Bay holds a slim edge over the Western Conference’s Phoenix Rising FC and El Paso Locomotive FC in the maximum available points.

“That top seed is very important,” said Guenzatti. “We really want to play the whole playoffs and even the final at Al Lang. It will be a dream for us, the fans, and the whole organization. They’ve been working very hard. Last year, due to COVID, we didn’t have the chance to play at home, but now I know if we put in all the effort and everybody works together and we play at home, we’re going to have an amazing time.”

Guenzatti received 62 percent of a weighted poll that included the USL Championship Technical Committee, a national panel of independent media representing every USL market and an online fan vote on USLChampionship.com. Miami FC’s Christiano Francois finished second on 16 percent after recording five goals in five games, while Phoenix Rising FC’s Santi Moar finished in third place following his five goals in six games, including a pair of game-winners for the Pacific Division title-winner.