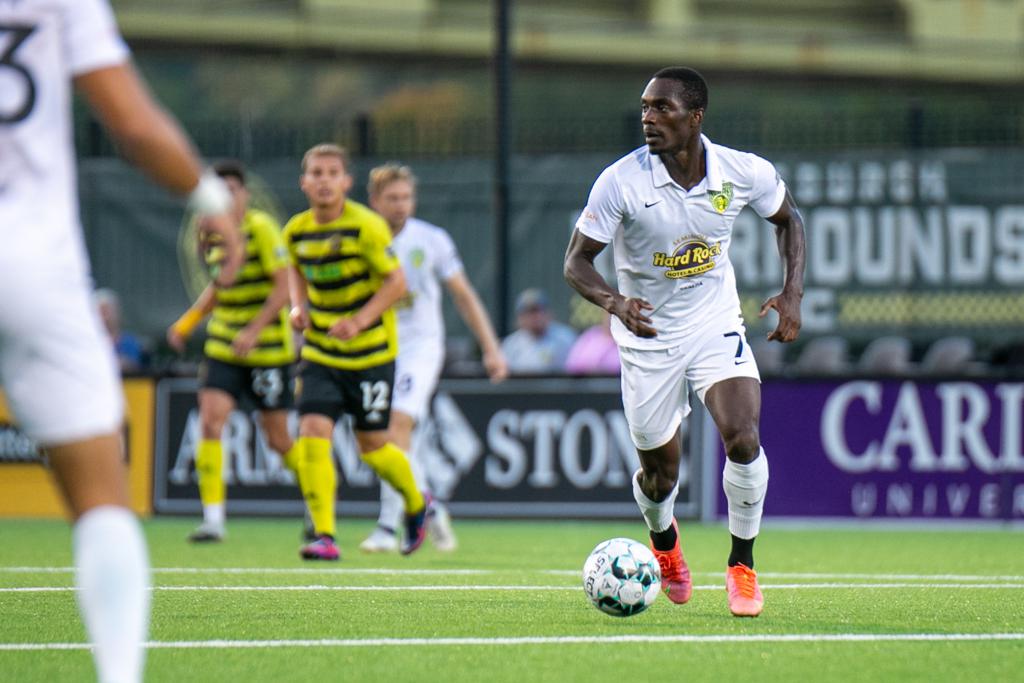 The Tampa Bay Rowdies’ unbeaten run ended at 12 matches on Sunday night, as the club fell 2-0 on the road to Pittsburgh Riverhounds SC. It is the first time the Rowdies have dropped a match since July 31.

As bitter a pill to swallow the Pittsburgh loss, Sunday was not all bad news for the Rowdies. With Miami FC losing out to Loudoun United FC 3-2, the Rowdies were able to clinch the Atlantic Division crown before they even kicked off against Pittsburgh. The Rowdies put themselves in the position to clinch so early with their remarkable 12-match unbeaten run, in which they won  9 straight matches.

“You’ve got to give the boys a huge amount of credit for putting us in the position to have clinched the Atlantic,” said Rowdies Head Coach Neill Collins. “It’s a very, very tough division. To do that is a real achievement for the players, and that’s not to be sniffed at. But we’re quite quickly on to the next game, the next three points and seeing if that can get us the top seed in the east. Let’s just focus on winning the next game. The players have done a great job of that this year. You get used to picking up those victories. This is just a little reminder of what we need to do well.”

Collins made a few changes to the Rowdies starting lineup in Pittsburgh as the Rowdies entered the match having just played on Thursday. Zach Steinberger and Steevan Dos Santos both came in to start up top alongside Juan Tejada, while the club’s leading scorer Sebastian Guenzatti started the night on the bench.

After surviving some early pressure from the hosts, the Rowdies came inches away from jumping ahead. In the 25th minute, Lewis Hilton launched a long range free kick to the left edge of the box for Forrest Lasso, who headed it toward the near post where Dos Santos was waiting head it toward goal. Dos Santos’ header clipped the underside of the crossbar and bounced down very close to, if not fully across the line. The Rowdies protested but no goal was called by the center referee or his assistant.

Just as it looked as if the Rowdies and Pittsburgh were set to head into the break scoreless, a slip up in the back gave the hosts a go-ahead goal. Defender Jordan Scarlett could not get a clean clearance on a cross sent in from the left by Preston Kilwien, allowing Tommy William to collect the ball with space in front of goal and bury it

The Rowdies had a chance to pull level in the 56th minute after Dos Santos was taken out by Danny Vitiello in the box. Leo Fernandes stepped to the spot but had his attempt blocked by Vitiello. A rebound attempt from Tejada was then sent over the goal.

“I actually thought (the missed penalty) might have galvanized us,” said Collins. “The boys have done so well with adversity, but it was maybe a bridge too far. We weren’t at our best and I thought if we had scored that we would have had a real good chance at going on and winning the game with the momentum. I thought there were a lot of pivotal moments. The first goal we lost certainly was out of nothing and then obviously gave them a leg up when we were looking at going in at halftime nil-nil. These things happen. We’ve had breaks for and against us. We didn’t get them tonight, but we maybe didn’t do enough to swing them our way either.”

Pittsburgh was more ruthless when they earned their own penalty in the 76th minute as Hugh Dixon was tripped up by Forrest Lasso just inside the box. Russel Cicerone then stepped to the spot and converted to put the match out of the Rowdies reach.

Collins didn’t see the fact that the Rowdies were coming in on short rest as a huge factor in the loss to Pittsburgh, who had a full week to prepare and knew they could secure their postseason spot with a win.

“I think you have to take into account you’re playing against a highly motivated Pittsburgh team coming off a disappointing loss and having a week to prepare,” said Collins. “I just don’t think it was the tiredness tonight. Maybe mentally tired rather than physically tired. I just don’t think we had enough guys doing the things that they’ve done really well. Is that down to short rest? I don’t think that it really is. We just had too many off nights.”

The Rowdies will look to rebound back home at Al Lang Stadium this Friday against New York Red Bulls II. Tickets for the match can be purchased here.