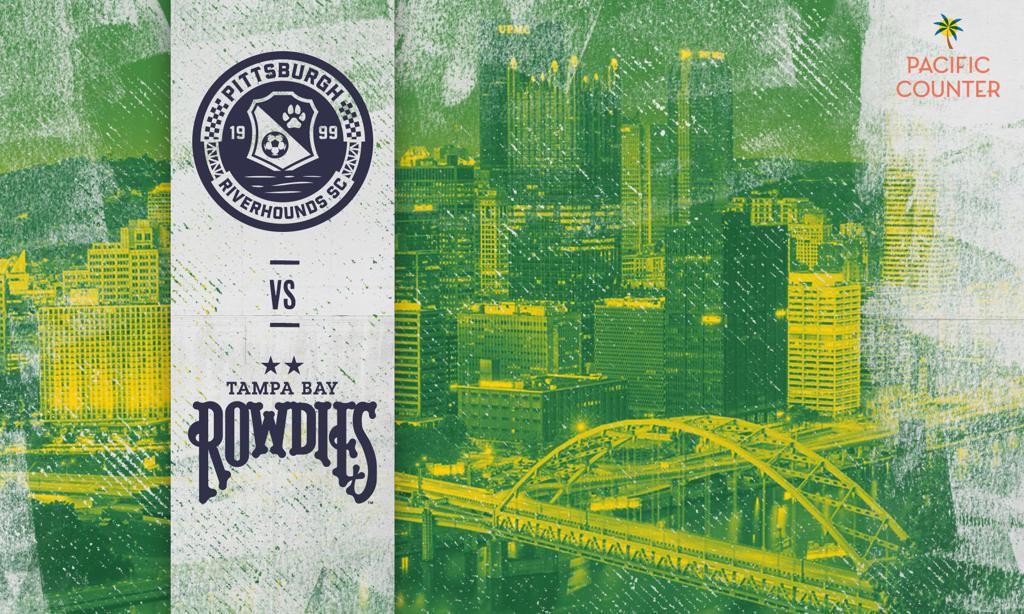 Watch: The match can be viewed on ESPN+ here.

The Tampa Bay Rowdies will close out the week with their fourth and final regular season meeting with Pittsburgh Riverhounds SC this Sunday at Pittsburgh's Highmark Stadium. In their last trip to Pittsburgh back in August, the Rowdies picked up a point in a scoreless draw.

On this trip, the Rowdies will be aiming to take all 3 points off Pittsburgh in order to lock up the Atlantic Division crown. History says that will be a tough task for the Rowdies, as they have never recorded a win any of their six trips to Pittsburgh. Rowdies Head Coach Neill Collins has been in charge for the club's last three of those away days in Pittsburgh, posting a draw each time out.

"Pittsburgh’s a really unique game," said Collins. "There’s two way of looking at our record in Pittsburgh; we’ve not won there, but we’ve tied the last three. A point in Pittsburgh’s always a good result. Pittsburgh are a fantastic team, well organized, but they prey on teams that make mistakes and become too expansive. Playing (at Al Lang) versus there is a totally different kettle of fish. I think we’re in good form and we’re playing a lot of good football, but we obviously need to make adjustments and be ready for Pittsburgh and the environment we’re going into... We’ve certainly lacked a bit of quality tlast time there. If we take the quality that we've had since then, I think that will give us a better opportunity of scoring."

It is also possible for the Rowdies to secure the top spot in the Atlantic regardless of how things go Pittsburgh. If Miami FC loses to Loudoun United FC on Sunday, then the Rowdies clinch the division. A Miami draw and a Rowdies draw would also get the job done. Miami kicks off against Loudoun at 1pm ET on Sunday.

"The top of the Atlantic would be a fantastic achievement because it’s been such a strong division," said Collins. "It’s been nip-tuck all the way and that would be nice for the players I think to win the Atlantic Division against top opposition. It’s not necessarily our next objective because our next objective is to perform well on Sunday. If we do that we give ourselves a good chance at achieving that goal."

No Time to Rest

The Rowdies enter this Sunday having just played a heated match against the Charleston Battery on Thursday. Emotions ran high in that one, as the visiting Battery battled to stay alive in the postseason hunt. The Rowdies ended the night with the win, but they must dig deep to bring the same intensity to get a good result in a tough environment this weekend.

"Every team in the league has had those short turnarounds, so I think it’s hard to complain.," said Collins. We’ve been beneficiaries maybe at some point. I don’t think it’s ideal going on a Thursday and then a Sunday, especially when you’ve got quite a long season to get those games in, but it’s a great challenge again for our players, to go to one of the toughest places in the league on short rest with them coming off a week to prepare. I think our boys thrive on those challenges. They’ll need to be up for those challenges, but the good thing is at this stage of the season we know what we’re about."

Tampa Bay would also love to nab their first ever win in Pittsburgh, especially considering Pittsburgh came to Al Lang and left with a win back in June.

"They’re a tough team," said Rowdies midfielder Leo Fernandes. "They came (to Al Lang) and beat us earlier so we definitely want to get some revenge. Playing over there’s not an easy place to play, but the boys are ready. We’ll come in and get the legs ready and we’ll be up for the challenge."

It can be easy to devalue what keeper Evan Louro means to the Rowdies when the back three in front of him get so much well-deserved praise for limiting the opposition to getting an chances on Tampa Bay's net. However, Collins and the rest of the Rowdies don't for a second question what Louro brings to the squad. Despite the fact that Tampa Bay conceded two goals to Charleston on Thursday (one an unfortunate own goal), Louro arguably had his best match of the year with several incredible and vital saves to keep Charleston from scoring even more. Even with the recent concessions, On top  of his league-leading 13 clean sheets, Louro also still leads the USL Golden Glove race with a 0.7 goals against average.

At 19 goals this year, Guenzatti has matched the Rowdies single-season scoring record, which he set himeslf back in 2019. He also sits at 55 total goals for the Rowdies, putting him 5 back of Georgi Hristov's all-time scoring record of 60 goals.

"It’s no different than the team he’s playing on," said Collins. "I don’t know if you’ve every seen a run like this from the team before. He’s just playing so well. He just signifies, as we say so often, all the character traits that we want. He’s had a couple disappointments. I’d be so surprised if he doesn’t win USL Player of the Month… The goals are obviously fantastic. That’s what he makes his living on, but I actually think his all-around performances have been really good. He’s a great captain. He’s a great player, and it’s great to work with him."