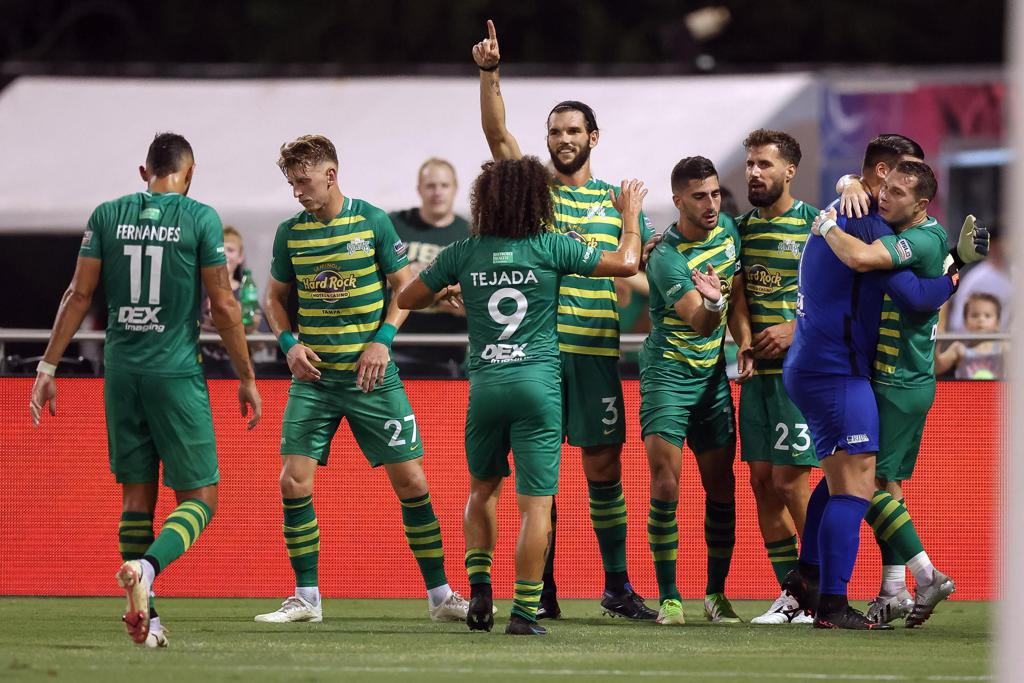 ST PETERSBURG, Fla (October 7, 2021) - The Tampa Bay Rowdies pulled within one win of clinching the Atlantic Division on Thursday night with a thrilling 4-2 victory over the Charleston Battery. The win is Tampa Bay’s 9th straight and also guaranteed them a home playoff game in the first round of the postseason.

“Charleston made it difficult,' said Rowdies Head Coach Neill Collins. "Charleston had moments. They looked like they could have scored. Credit to the boys. Some of the football they played tonight was really enjoyable. Anyone that was in that stand tonight would have felt they got some entertainment.”

Charleston earned the first chance on goal of the night in the 12th minute when Zeiko Lewis targeted the goal with a free kick from 20 yards out. Rowdies keeper Evan Louro, though, stretched all the way out to his right to push the strike out for a corner.

The Rowdies then threatened for the first time 10 minutes later. Leo Fernandes lifted a cross from the left into the box for Sebastian Guenzatti, who headed the service toward the ground and onto the frame only to see keeper Joe Kuzminsky thwart the attempt with a fine save. Guenzatti would not be denied on his next header in the 27th minute, though. This time it was Connery Antley out on the right offering the setup for Guenzatti to head back across goal and past Kuzminsky.

Guenzatti did not wait long to bag another, scoring again in the 34th minute. Driving forward into Charleston’s defensive third, Fernandes threaded a ball for Guenzatti into the box and the Rowdies captain hit a low strike that rolled past Kuzminsky before glancing off the far post into the back of the net.

It’s the fourth brace in a match for Guenzatti this year, as well as his fifth straight match with a goal. At 19 goals on the year, he has matched his own club single-season scoring record of 19 goals, which he set in 2019.

“The goals are fantastic,’ said Collins. “That’s what (Guezatti) makes his living on, but I actually think his all-around performances have been really good. He’s a great captain. He’s a great player, and it’s great to work with him.”

An unfortunate miscue by the Rowdies defense opened the door for Charleston in the 36th minute. Defender Jordan Scarlett and Louro were not on the same page as the center back played a pass back for the keeper that ended up slipping by him and into the net.

Charleston had a promising look at equaling the match 10 minutes into the second half when Claudio Repetto fired a shot from the top of the box straight toward the to right corner. However, Louro was up to the task and dove to punch the ball out for a corner. The visitors managed to guide the ball on goal off the ensuing corner, but midfielder Sebastian Dalgaard was in position to clear the ball off the line.

One minute after Charleston’s back-to-back chances, the Rowdies extended the lead to two again as Antley picked Fernandes out with a cross for the attacker to blast past Kuzminsky with his first touch from just inside the box.

The hosts were able to pull one back deep into second half stoppage time as substitute Joel Bunting finished off a counter attack opportunity. However, the Rowdies immediately responded on the restart by launching a counter attack of their own that ended with substitute Zach Steinberger feeding a pass to another substitute Steevan Dos Santo inside the box. With no defender to close him down, Dos Santos was able to notch one more tally for the Rowdies.

With the win, the only team that still has a chance at catching the Rowdies for the top spot in the Atlantic Division is Miami FC. The Rowdies are now out of reach for third-place Pittsburgh Riverhounds SC, who the Rowdies face on the road this Sunday.

“The top of the Atlantic would be a fantastic achievement because it’s been such a strong division," said Collins. "It’s been nip-tuck all the way and that would be nice for the players I think to win the Atlantic Division against top opposition. It’s not necessarily our next objective because our next objective is to perform well on Sunday. If we do that we give ourselves a good chance at achieving that goal.”