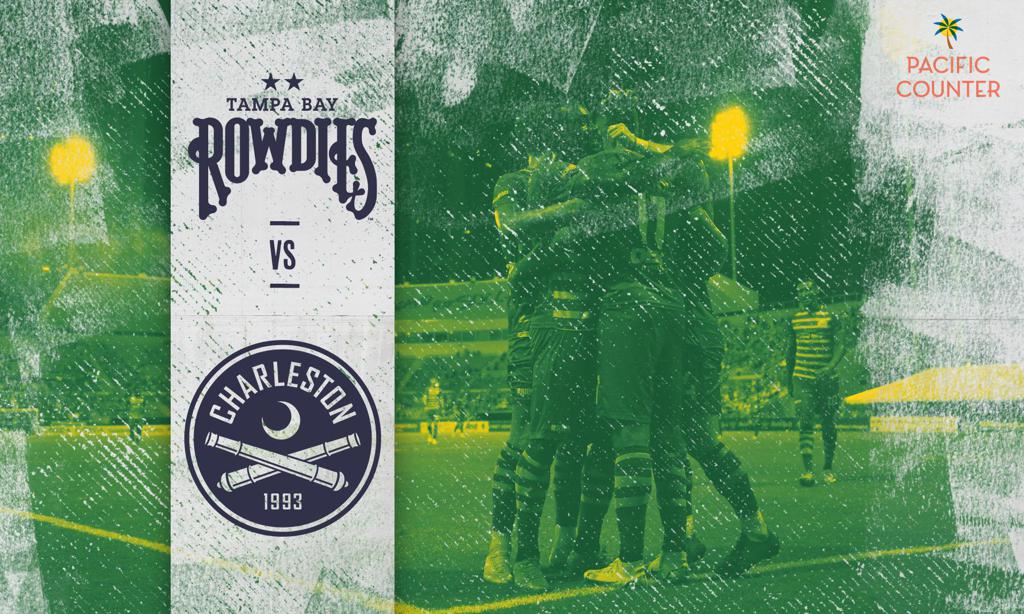 Tickets: Fans can purchase tickets for the match here.

Watch: The match will be broadcast nationally on ESPN Deportes

It's déjà vu for the Tampa Bay Rowdies (19W-6L-1D, 58 pts) this Thursday at Al Lang Stadium as they ready to face the Charleston Battery (8W-10L-7D, 31 pts) for the second time in five days. Tampa Bay just earned a 2-1 win at Charleston this past Saturday, their third straight road win and 8th straight victory overall.

It's not often that a team finds itself matching up with the same team in back-to-back matches. The season series has gone well so far for the Rowdies, who have all three of the matchups this year, but facing off in such short proximity makes this four meeting a tricky scenario to go for another 3 points. Rowdies Head Coach Neill Collins anticipates Charleston throwing a few new looks at his squad on Thursday, but his focus remains on Tampa Bay's side of things.

"Charleston made a couple of changes during the second half (on Saturday)," said Collins. "They had some good players come in; Zeiko Lewis, Josh Penn, Logan Gdula. So I expect them to make changes, get some of these guys into the lineup. It’s really difficult to second guess Mike (Anhaeuser) on this game because he’ll have his own take on the last game and how things went. More than any other game, we’ve got to focus on our own selection and our own tactics and just be prepared for what Charleston might throw at us. That’s what makes it really difficult in this situation. I’m sure they’ll have a couple of things that they’ll want to try."

The Rowdies took an important step in their quest to win the league title this past Saturday by clinching their postseason spot. With that bit of business out of the way, the remaining goals for the Rowdies at the Atlantic Division crown and the top overall seed, which would guarantee home field advantage throughout the postseason.

If the Rowdies are going to claim home field advantage throughout the postseason, it is going to take all hands on deck in the final month of the season. They have managed to string together an incredible string of results to go unbeaten in their last 10 over the past two months, but the rest of October will be a sprint to the postseason as they face 6 matches in 23 days starting this Thursday when they host Charleston and then fly to battle Pittsburgh Riverhounds SC on Sunday.

"We’ve been fortunate that we’ve had a lot of the same starting XI over the last few weeks.," said Collins. "We’ve had a lot of Saturday games, so I’ve not felt the need to tinker or change things too much. But now I need to look at making sure we’ve got as many guys in some sort of rhythm and some sort of match minutes without disturbing the guys that are in full form. I think it’s up to me, how can I introduce some of the other guys and help them to contribute and just get as many guys ready to contribute by the end of the season. There’s definitely guys there that are pushing and ready to go. It’s just a matter of when’s the right time."

With players such as Sebastian Guenzatti, Steevan Dos Santos and others carrying much of the workload over the last two months, Collins expects to be rotating his squad more as the postseason approaches.

"As I tell the players, all these guys are here for a reason. They’re all here because they bring something different or unique that the other players don’t have. I’ve just got to remind them that some of the time spent on the side recently is down to the great form of the team and not due to their bad form...Someone like Juan, I can’t actually wait to see him on the field. Lucky as well has been looking really exciting in training, amongst many others. It’s gonna be good to give these guys more opportunity. Then it’s up to them as well to make the most of that opportunity and show that they should maybe be getting more minutes."

Now unbeaten in their last 10 and sitting with a postseason berth in hand, it's easy to forget questions were being raised about Tampa Bay's championship chances in July when the team lost three straight matches in the span of 10 days.

It may seem easy to say now considering where his team sits in the standings, but Collins never wavered in his faith in this Rowdies squad.

"I feel in that period we had to work so hard as a staff to get the team ready because we were missing guys," Collins said of the summer lull. "It was a test, it was a challenge. But I just felt we were going to be okay. We’d set such high standards following on from last season that because we slipped with a couple of results, obviously questions are asked in terms of what’s gone wrong, but I just felt once we got EYann kra back, we got Laurnce Wyke back, Dos Santos back, Tejada back, Lucky back, I just thought we’d be able to start converting these results and great performances... It was a good learning experience for me. But the players are huge because we’ve got guys like Forrest Lasso, Sebastian Guenzatti, LuckyMkosana -- positive people. If the dressing room is different we might have had more challenges, but I’ve got a group of guys that are totally bought into being successful. That makes it easier for me."