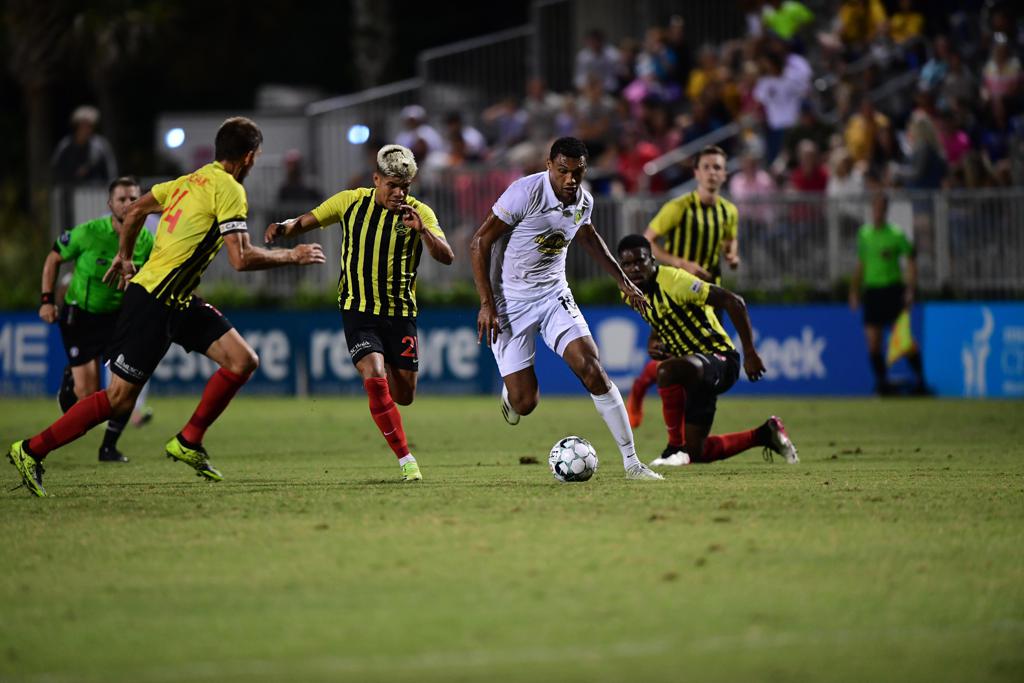 You have to be in it to win it and we now know for sure that the Tampa Bay Rowdies will be in the 2021 USL Championship postseason.

This year’s Rowdies team was able to lock up their spot in record time, ensuring that the Rowdies will be playing postseason soccer for the third straight year.

“I think it’s a credit to the boys that we’ve managed to do it in record time, which is really impressive considering the conference that we’re in and how difficult it's been,” said Rowdies Head Coach Neill Collins. “But I’ll tell you someone who won’t be celebrating and that’s the players. Their eyes are on further things down the road. I’m glad I’ve got a group like that. They only see the playoffs as a step along the road to where we want to be.”

Tampa Bay stands on solid footing as the postseason nears, but it will by no means be easy the rest of the way. For months, Pittsburgh Riverhounds SC has been the most persistent rival for the Rowdies when it comes to the Atlantic Division crown. However, Miami FC emerged as a new competitor with a last-minute win over Pittsburgh at home on Saturday night. Miami and Pittsburgh sit 10 points back of the Rowdies, who can set a new club record for most points in a season with just one more point in their final 6 matches.

In order to clinch the division title and put Pittsburgh and Miami out of reach, the Rowdies need to pick up 6 more points. Meanwhile in the Western Conference, Phoenix Rising FC’s 59-point total is still the best across the league. The Rowdies are just one point behind Phoenix, but have a crucial game in hand that might come in handy in the race for the top overall seed in the postseason.

Seba’s Resilience from the Spot

Sebastian Guenzatti was unable to continue his streak of braces this week, but the Rowdies captain still came through with a game-winner from the penalty spot. The tally was Guenzatti’s 17th on the year, placing him second in the hunt for the league’s Golden Boot.

Seven of those goals have all come in the last four matches. As hot as Guenzatti has been in recent weeks, though, the attacker had a bit of a hurdle to get over when he stepped to the spot in Charleston on Saturday. Guenzatti’s last two penalties were denied. Complicating the situation was the fact that Charleston’s keeper Joe Kusminsky had already faced a penalty from Guenzatti in July, which could have given him a beat on where Guenzatti was going to place the ball.

Even with the recent failed attempts, there was no way Guenzatti was not going to be the one to take Saturday’s penalty, according to Collins.

“It's a sign of his character, his mentality, also his technique to be able to just calmly slot that one home against a goalkeeper he’s already scored a penalty against this year, which can be difficult because you start second guessing each other,” said Collins. “It’s fantastic for Seba. It wasn’t a brace, but it was a goal and I’m sure he’ll be pleased it was a penalty to just get that out of the way. But as I saw, Seba leads from the front all the time. The fact that he took the penalty says a lot about his character because it would have been easy to pass it on.”

The Rowdies found themselves in a rough spot ten minutes into Saturday’s match at the Charleston Battery. With the hosts grabbing an early lead through a penalty and two of Tampa Bay’s three center backs picking up yellow cards within the first 12 minutes, the night could have ended badly.

“I thought in that moment I thought we looked a little bit emotional for a couple of minutes, understandably so,” said Collins. “But the reaction was fantastic and I thought it spurred us on to play some of the best football for the next 30 minutes that we’ve seen all season.”

The Rowdies took just seven shots in the match, but it was all they needed thanks to another sturdy defensive showing from the entire squad. The back three of Forrest Lasso, Aaron Guillen and Jordan Scarlett all combined for 19 clearances in the match. Apart from the penalty, Charleston’s only efforts on target were aimless attempts from distance, which were both easily handled by Evan Louro.

“If you don’t win those first headers and clearances, all manner of trouble happens,” said Collins. “If your goalkeeper doesn’t come to command his box the way Evan does, all manner of trouble happens. It’s not really a tactical thing. Yes, we’ve got tactical organization, but it’s about dealing with long balls, crosses, free kicks, set pieces. All the players did a great job of that. That’s what managed to keep Charleston at bay. Don’t underestimate winning those headers.”

If Charleston was desperate to win on Saturday, they will be even more desperate to claim a win when they come to Al Lang Stadium this Thursday now that their playoff hopes are dwindling further away. Along with a motivated Charleston, the Rowdies face a tough week ahead just based on scheduling. After Thursday's battle with Charleston, the Rowdies will travel to face Pittsburgh on Sunday. At that point, Pittsburgh could be ready to go all out in order to keep their chances at winning the division alive.

The entire month will be grueling for the Rowdies, who have six more matches to play. Collins has been consistent with his starting lineup and bench during the team’s unbeaten run, but expect to see some shake ups in the next few matches as he looks to balance the fitness of the squad.

“We’ve been really fortunate to run the same team out over and over because they’ve been doing so well,” he said. “I’ve not felt the need to make too many tactical changes, but I think over the next two games we certainly will. I think we’ll see some guys get those opportunities because we have to be fair to those guys that have waited so patiently, but also be fair to those guys that have played a lot. We want them fit and ready heading into the playoffs. We’ll need to use our squad wisely over the next two games.”