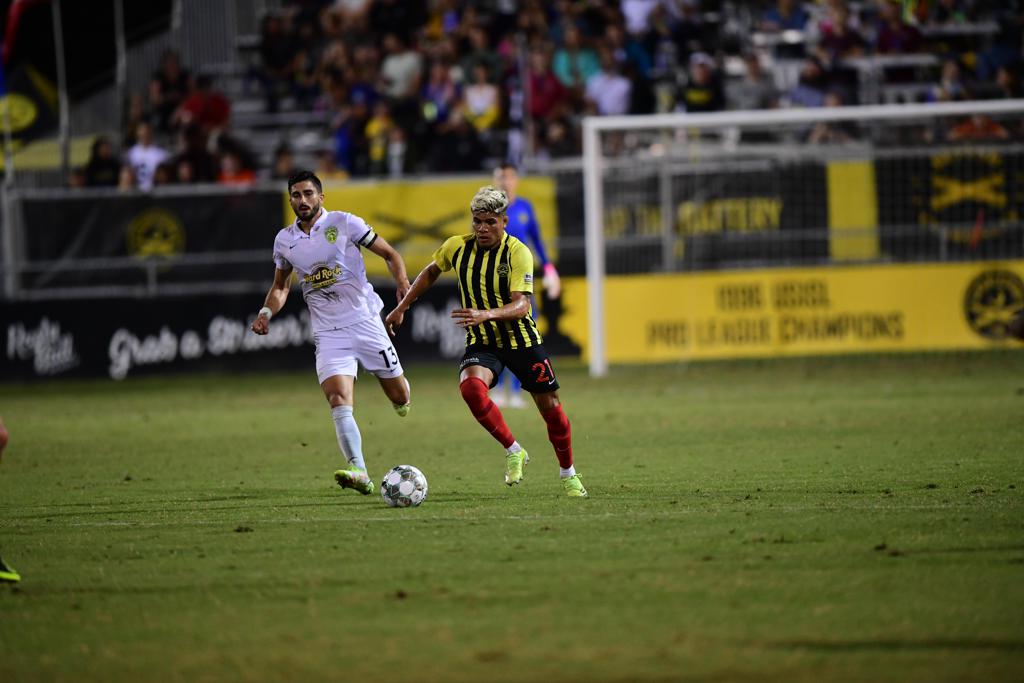 For the third straight season, the Tampa Bay Rowdies are bound for the USL Championship postseason. The Rowdies locked up this year’s spot on Saturday night, erasing an early deficit to win 2-1 over the Charleston Battery at Patriots Point Soccer Stadium.

With six matches still left to play in the regular season, this marks the earliest point at which the Rowdies have secured a postseason spot. Now at 58 points, the Rowdies have also matched the club’s record for most points in a season, which was set by the 2019 Rowdies squad.

“We don’t take it for granted, but it’s a small step,” said Rowdies Head Coach Neill Collins. "I think it’s a credit to the boys that we’ve managed to do it in record time, which is really impressive considering the conference that we’re in and how difficult its been. But I’ll tell you someone who won’t be celebrating and that’s the players. Their eyes are on further things down the road. I’m glad I’ve got a group like that. They only see the playoffs as a step along the road to where we want to be.”

The Rowdies needed just a point against Charleston to secure their postseason berth, but the club managed to come away with all 3 points and extend their lead atop the Atlantic Division standings as Pittsburgh Riverhounds SC dropped points for the second straight week in a 3-2 loss to Miami FC.

It did not appear as if it would be the Rowdies’ night early on in Charleston. In the 10th minute, the hosts grabbed a go-ahead goal after Rowdies defender Jordan Scarlett was harshly judged for a handball in the box. A shot from distance clipped Scarlett’s leg and then redirected into the air and grazed his hand, and that was enough for the referee to give Scarlett a yellow card and award Charleston a penalty which they took advantage of.

The match threatened to slip away from the Rowdies as they got into a few scuffles with the visitors and verbal arguments with the referee. Forrest Lasso was shown a yellow card in the 12th minute, putting two of Tampa Bay’s center backs on a yellow card. However, the Rowdies kept their cool and worked their way back into the match.

“I thought in that moment I thought we looked a little bit emotional for a couple of minutes, understandably so,” said Collins. “But the reaction was fantastic and I thought it spurred us on to play some of the best football for the next 30 minutes that we’ve seen all season. We really could have had other opportunities. That was an excellent first half performance and to come in ahead after having that setback was very good.”

The Rowdies were rewarded for their perseverance in the 21st minute. Taking possession in Charleston’s half, midfielder Laurence Wyke charged forward before slipping a pass to Guenzatti on the left edge of the box. Wyke continued his run, finding a window of space in front of goal for Guenzatti to feed him a cross which Wyke buried for his first tally of the year.

Only four minutes later, Guenzatti put the Rowdies ahead with his 17th goal of the season. Guenzatti did so from the penalty spot, converting after his partner up top Steevan Dos Santos was tripped from behind trying to run onto a cross from Sebastian Dalgaard. The Rowdies captain had missed his last two from the penalty spot, but this time he made no mistake by slotting his attempt past Joe Kuzminsky.

Clear cut chances were few and far between for both sides in the second half. The Rowdies had the best, though, as Wyke came close to notching his second. Wingback Leo Fernandes cut inside from the left and slipped a pass for Wyke, who guided his strike on target only to have Kuzminsky produce a brilliant kick save. Charleston threw numbers forward throughout the second half, but Rowdies keeper Evan Louro had no true threats to his net to contend with.

The Rowdies and Battery are set to meet again on Thursday, October 7 as the Rowdies return home to Al Lang Stadium for the first time in three weeks. They return having won all three road contests, as well as an 8-match winning streak and an 11-match unbeaten streak.