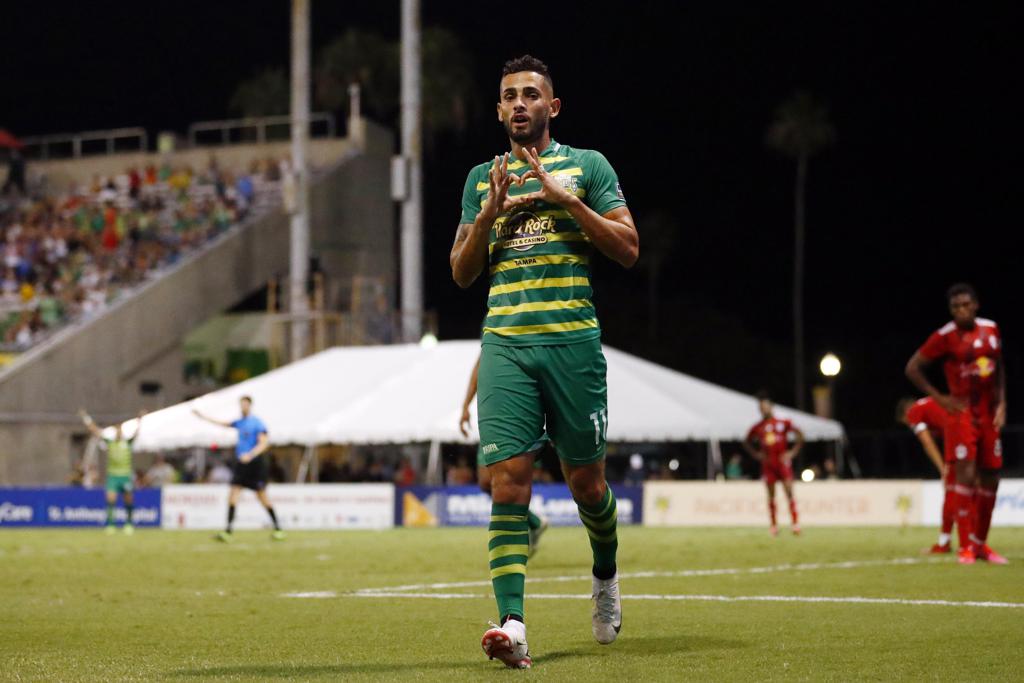 ST PETERSBURG, Fla (September 28, 2021) - For the fifth week in a row, the Tampa Bay Rowdies are represented on the USL Championship Team of the Week. Midfielder Leo Feranandes is the latest Rowdies player to earn a spot, doing so on the back of his two assists in Tampa Bay’s 2-1 win at Hartford Athletic.

Both of Fernnades’ assists were finished off by Rowdies Captain Sebastian Guenzatti, who earned a spot on the Team of the Week bench after recording his third straight brace.

This is Fernandes’ first time making Team of the Week this season, though he did make the bench in Week 21 for his two-goal shift in Tampa Bay’s 6-0 victory over New York Red Bulls II at Al Lang Stadium. Against Hartford, Fernandes finished with 4 key passes and also won 15 of 21 duels and 10 of 13 aerial duels on the defensive end.

Fernandes returned to the Rowdies starting lineup on September 7 after missing a month of action due to injury. Since then, the creative midfielder has been on a tear in the left wingback spot for the Rowdies. His form, as well as the contributions of Tampa Bay's other wingbacks, over the past several weeks has helped the club maintain its unbeaten run over the last two months.

“Leo would be the first to tell you Conner Antley and Sebastian Dalgaard have been a big part of his success because they did really well when he was out and they made sure when he came back that they are battling for those positions,” said Rowdies Head Coach Neill Collins. “He’s risen to the challenge. We’ve got great wingback options with Leo, Max Lachowecki, Dayonn Harris, Connery Antley, Sebastian Dalgaard, and we need them all to keep creating those chances for Seba Guenzatti to finish.”

With his two assists in Hartford over the weekend, Fernandes has put his total on the season up three. His 19 total assists since joining in 2017 now ranks him second in modern era, His assists in Hartford lifted him past Luke Mulholland and Mike Ambersley, who both have 17. Former Rowdies forward Georgi Hristov hold the top spot with 33 total assists.

This Saturday, the Rowdies travel to face the Charleston Battery before returning home to face Charleston again on Thursday, October 7. The Rowdies need just one more point to lock up a postseason spot.

View the full USL Championship Team of the Week for Week 23 below:

D – Jonathan Gomez, Louisville City FC: The 18-year-old notched an assist and three key passes while completing 42 of 51 passes overall and defensively made 13 recoveries in LouCity’s 1-1 draw at Memphis 901 FC.

D – Leland Archer, Charleston Battery: The Trinidad and Tobago international scored the first two goals of his Championship career in games against the New York Red Bulls II and Pittsburgh Riverhounds SC while winning 16 of 20 duels and 7 of 10 aerial duels across the two contests.

M – Leo Fernandes, Tampa Bay Rowdies: Leo Fernandes provided the assists on both of the Rowdies’ goals in a 2-1 victory against Hartford Athletic and ended the night with two shots and four key passes overall while winning 15 of 21 duels and 10 of 13 aerial duels defensively.

M – Diego Luna, El Paso Locomotive FC: The 18-year-old continued his stellar season with one goal on two shots and three key passes in El Paso’s 2-2 draw with Austin Bold FC while completing 36 of 41 passes overall and winning 9 of 15 duels.

F – Neco Brett, Birmingham Legion FC: The Jamaican forward recorded three goals and one assist across a pair of Legion FC victories against Atlanta United 2 and the Charlotte Independence while recording eight shots overall and completing 22 of 30 passes.

F – Ariel Martinez, Miami FC: The Cuban forward had one goal and two assists while recording five key passes and completing 3 of 4 dribbles and 23 of 27 passes overall in Miami’s 6-1 victory against Loudoun United FC.