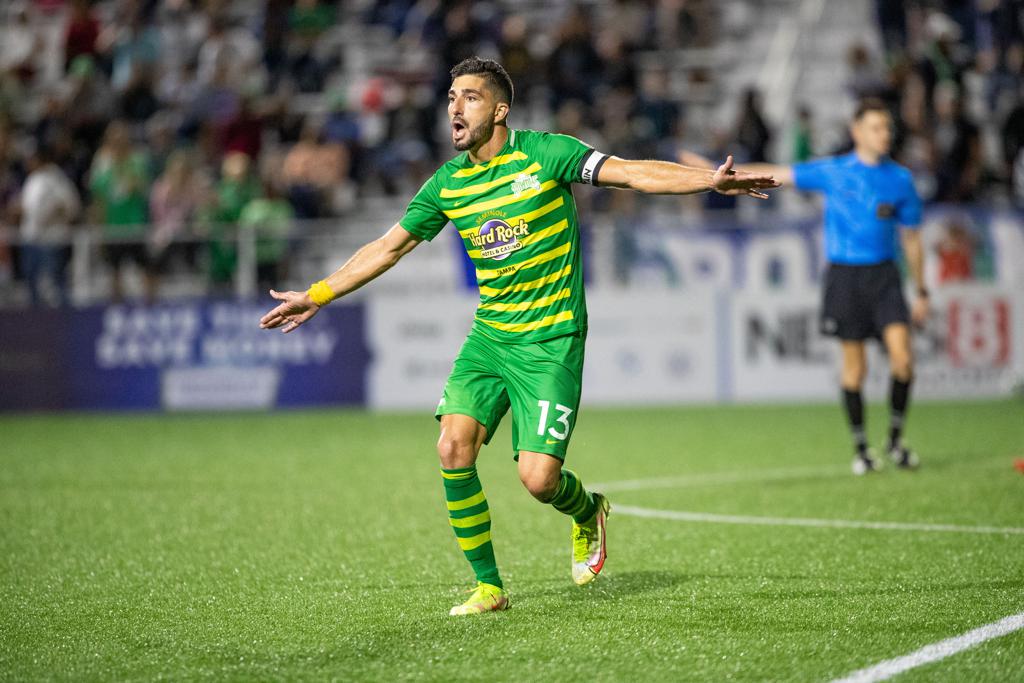 The Tampa Bay Rowdies' historic shutout streak came to an end at 891 minutes on Saturday night at Hartford Athletic’s Dillon Stadium, with the hosts finally getting one past Rowdies keeper Evan Louro deep into second-half stoppage time. Even though that historic streak ended, the Rowdies did enough to extend their unbeaten run to 10 and their winning streak to 7 with a 2-1 result as Sebastian Guenzatti recorded a brace for the third straight match.

“We knew the second half was going to be tough and they certainly put us under pressure, especially on set pieces,” said Rowdies Head Coach Neill Collins. “What a result. I can’t speak highly enough of these boys. Going into that situation, with teams obviously wanting to score against and for the boys to raise the level of their performance again in a really tough environment was excellent.”

Saturday’s match played out similarly to last weekend’s win at Atlanta United 2. Besides the fact that Guenzatti was the goal scorer that night as well, the Rowdies jumped ahead early and then bagged an insurance goal with seconds to go before the halftime whistle.

Yann Ekra was nearly the one to grab the go-ahead goal in Hartford, blasting a rocket toward the top corner just 30 seconds in that was barely tipped away by keeper Jeff Caldwell.

Guenzatti did eventually find the opening goal in the 12th minute, as Ekra and Leo Fernandes combined in the box to spring Fernandes into a dangerous area before he sent a pass in for Guenzatti. Caldwell was in the area to scoop it up, but Guenzatti just barely beat him to the ball and tapped it across the line.

The Rowdies and Guenzatti were given a chance to double the lead just past the half hour mark when Steevan Dos Santos was dragged down in the box. Guenzatti stepped up to the spot and drove his attempt down the middle of frame and Caldwell dove to his right, but the keeper was still able to kick the ball away and deny Guenzatti.

Caldwell could only keepr Guenzatti from his second for so long, though. With just seconds remaining in the half, Louro lofted a long free kick from inside Tampa Bay's end of the field up to the left wing, where Fernandes then headed it forward into the box. Guenzatti timed his run and strike perfectly to volley the ball off the bounce over Caldwell and into the net.

Hartford came out of the break with a purpose and drive to break the shutout streak and find a way into the match. Thomas Janjigian came close in the 56th minute, receiving a pass in front of Tampa Bay’s goal at the top of the six yard box only to send it straight into the crossbar. Just a minute later, the Rowdies got another assist from the woodwork when a Nicholas Cardona header off a corner kick delivery from Danny Barrera ricocheted off the far post.

Guenzatti had one more look at a third goal when he took a chance from 25 yards with a dipping strike that would have snuck under the bar if not for a stellar swipe from Caldwell.

Hartford’s tally came in the third minute of four added minutes. Forrest Lasso produced an initial sliding block at the near post on a Derek Dodson cross, but Dodson was able to regain possession and center the ball for Barrera, who buried the last-ditch effort for the hosts.

“Those guys in there are disappointed about losing that goal because they know they could have prevented it," said Collins. "It’s the standard they’ve set. Hartford really asked a lot of questions and were unfortunate not to get a goal earlier. When you get that close, you really want that clean sheet. I think they’re already thinking let’s go on the next streak. It’s great we were able to achieve that record and know we’re on to what they next record might be.”

The Rowdies were unable to clinch a postseason spot on Saturday, but they will be more than happy for the reason why. Second-place Pittsburgh Riverhounds SC gave up a two-goal lead to finish 3-3 with the Charleston Battery, increasing the Rowdies' lead in the Atlantic Division. Had Pittsburgh finished ahead in that contest, the Rowdies would have locked up a postseason spot. Any points dropped by Pittsburgh at the point, though, are beneficial to the Rowdies, who are eying the larger goal of home field advantage in the USL Championship postseason. The Rowdies now sit 7 points ahead of Pittsburgh and still have two matches in hand on them as well.

Tampa Bay remains on the road next Saturday to face the Battery.