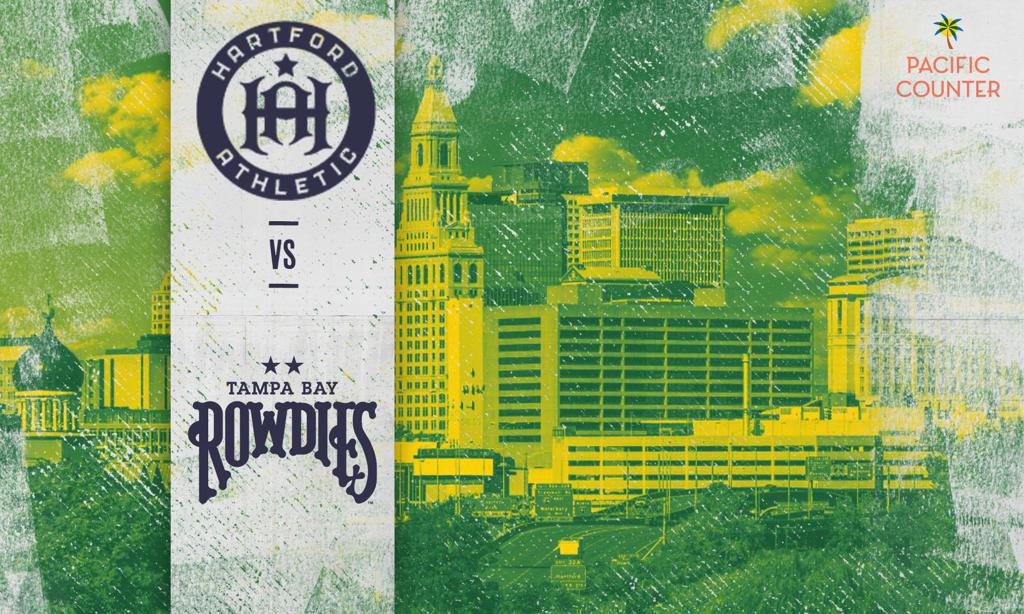 Watch: The match can be streaked here on ESPN+.

The Tampa Bay Rowdies return to Dillon Stadium this Saturday night for their fourth and final meeting of the regular season versus Hartford Athletic. In their last trip to Hartford in June, the Rowdies claimed a 1-0 victory off a Sebastian Guenzatti winner. Guenzatti enters the weekend on a scoring tear, bagging a brace in each of his last two outings. The Rowdies captain was named USL Championship Player of the Week for his stellar showing against Atlanta United 2 last week.

“I think in Atlanta (Guenzatti) had an excellent performance,” said Rowdies Head Coach Neill Collins. “His goals were great, but his all-around performance was really excellent. He held the ball up well and he really holds the ball up well for us often. Consistency doesn’t sound as exciting as anything else, but when you’re a very, very good player and you do that consistently, that’s pretty impressive.”

Tampa Bay’s other two matchups with Hartford have also ended in 1-0 scorelines, with Hartford claiming the win in one and the Rowdies taking the 3 points in the last meeting in August. Despite the low scoring from both sides in the prior three matches, Rowdies Head Coach Neill Collins believes there were still plenty of scoring chances for both the Rowdies and Hartford.

"I think the scorelines have been similar, but the games have been far from that," said Collins.

"Our first trip there was an excellent performance from the team. We’d suffered quite a few injuries, two the day prior. We’d lost Yann Ekra and Laurence Wyke, so I thought the players that day adapted fantastically well. While we got one good goal, we had two disallowed and Hartford funny enough missed a penalty. That could have very easily been a different scoreline, but it was still a very professional performance. I think we’ll all remember the following game at Al Lang, where we lost 1-nil and we created chance after chance and just couldn’t get the ball in the goal. Our last performance against  them was a very good performance against them where we did everything but score. I don’t know if it will be 1-nil again this weekend, but it will be exciting and they’ve all had their fair share of goal scoring opportunities."

The Rowdies have been one of the few USL Championship sides that has consistently had success at limiting Hartford's potent attack. Center back Aaron Guillen was key to the Rowdies securing a shutout in their last match at Hartford when he produced a vital goal line clearance to deny the club's leading scorer Juan Carlos Obregon Jr after he lobbed a volley over keeper Evan Louro.

"Our communication on the field throughout all the games has helped us a lot against them,” said Guillen. “Watching video helps us.The coaching staff prepares us for every game and gives us some tips on what they could be doing, but I think communication is a big part of our success."

Closer to Clinching
After the Charleston Battery's loss to New York Red Bulls II on Wednesday, the Rowdies have a chance at locking up their postseason berth this Saturday. All they need to do so is have Charleston fall to Pittsburgh and while also knocking off Hartford themselves.

There is an air of inevitability to the Rowdies securing a postseason spot at this point, with the club having a 99 percent chance at doing so. With that in mind, the focus remains on the larger picture of a championship and achieving that with home field advantage. To do that, the Rowdies will need to maintain their terrific run of through a busy final month of the regular season in October.

"We take this Hartford match first," said Collins. "The fact that we follow this one up with another road game is irrelevant right now. The good thing is it’s Saturday to Saturday. So we’ll prepare for Hartford away and then travel home and we’ve got another full week to prepare and to recover. While we’re always looking in advance to be best prepared, right now the fact that the next one is away is not an issue. Right now everyone is very much focused on Hartford, but we’re very mindful of the fact that we have a big October coming up with 7 games."

Communication is Key
The Rowdies are riding high on a 9-match unbeaten run and an even more impressive 8-match shutout streak. After the shutout last Saturday in Atlanta, the Rowdies record-setting shutout streak now stands at 801 minutes.

"Every game we go in thinking that we should not get scored on, because that gives us the opportunity at one point," said Guillen. "Especially on the road, when games are hard. If you take a point away from the home team, that’s great. But I think the back three, Evan, and starting from the forwards as well, defensively we’ve been amazing these past few games and even throughout the season. I just think it’s amazing and hopefully we can continue doing that for more games."

Hartford's Urgency
While the Rowdies are eying a playoff spot in the near future, Hartford is nearing must-win scenarios as they sit 5th in the Atlantic Division, 10 pts our of the final playoff spot.

"Hartford have always tried to play a positive, front-foot type of game," said Collins.  "When you get to this stage, they’re going to be going all out to keep their playoff hopes alive. That’s what the end of the season brings. Every game is difficult, but they’re more difficult because it’s the mentality of every point is a prisoner for pretty much every team in the league. Going to Hartford is always a difficult game. These are the type of games you want to be involved in. Going to play in front of a good crowd, playing when it means something. I’m excited, but we’ll definitely need to have the right mentality and be prepared for what they’re going to bring. While we’re ahead of them in the standings, in a one-off situation there’s not much in it. We’ll need to be at our best to give ourselves the best chance to win."