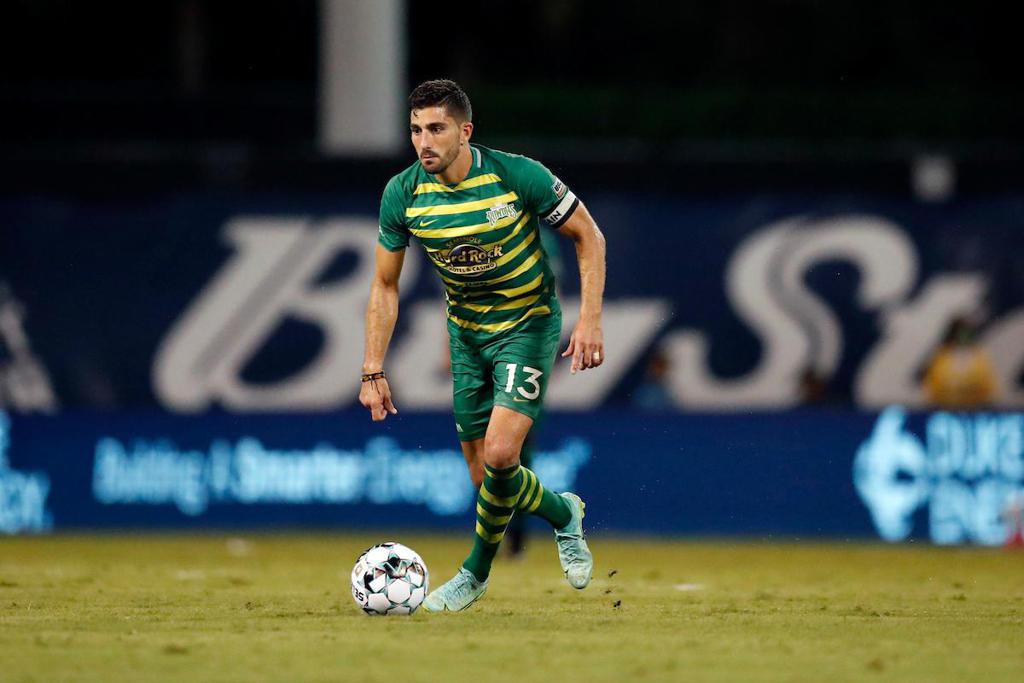 ST PETERSBURG, Fla (September, 21 2021) - For the second straight week, a Tampa Bay Rowdies player has claimed the title of USL Championship Player of the Week. Rowdies captain Sebastian Guenzatti earned the honor on the league’s Team of the Week for Week 22 of the season after notching two goals for the second match in a row as the Rowdies recorded their sixth straight victory with a 2-0 result at Atlanta United 2 this past weekend.

This is Guenzati’s first time picking up Player of the Week this year, but it is the fourth time he has been included on the USL Championship Team of the Week. He is the third Rowdies player on to be voted Player of the Week this season, following midfielder Yann Ekra in Week 21 and keeper Evan Louro in Week 19. Louro also earned a spot on the bench of the Team of the Week this week with his 8th clean sheet in a row and league-leading 13th shutout of the year. WIth Louro in net, the Rowdies set a new record for the longest stretch of minutes with conceding a goal, stretching their streak to 801 minutes without a concession.

Guenzatti set the tone for the Rowdies in the second minute against Atlanta, pouncing on a loose ball after the host’s keeper could not contain a cross sent in by Laurence Wyke. The striker then added an insurance goal for the Rowdies in first half stoppage time, connecting with a Steevan Dos Santos pass from  the right edge of the box.

With those two tallies in Atlanta, Guenzatti furthered his status as a Rowdies legend. He now stands at 50 total goals scored for the Green and Gold. Only Derek Smethurst (57) and Georgi Hristov (60) have notched more goals for the Rowdies. Guenzatti’s total on the season now stands at 14, putting him a few shy of the Rowdies’ single-season scoring record of 19, which Guenzatti set himself in 2019.

View the full USL Championship Team of the Week for Week 22 below:

GK – Cody Cropper, Memphis 901 FC: Cody Cropper recorded a four-save shutout and notched one punched clearance as 901 FC recorded a 3-0 victory against the New York Red Bulls II on Sunday to boost their playoff prospects in the Central Division.

D – Josh Yaro, San Diego Loyal SC: Josh Yaro scored his first goal in San Diego’s colors to provide the only goal of the game in the club’s 1-0 victory against Tacoma Defiance on Sunday afternoon and was stellar defensively winning 3 of 3 tackles and 5 of 7 duels while making seven clearances and completing 87 of 92 passes.

D – Skylar Thomas, Memphis 901 FC: The Canadian center back scored the second goal in Memphis 901 FC’s 3-0 victory against the New York Red Bulls II and defensively won 4 of 6 duels and made five clearances and three interceptions while completing 27 of 29 passes.

D – Fabien Garcia, Austin Bold FC: The French center back scored the only goal with an outstanding free kick in his side’s 1-0 win away to FC Tulsa and defensively recorded six interceptions and won 3 of 4 tackles and 6 of 8 duels to keep the hosts at bay.

M – Aodhan Quinn, Phoenix Rising FC: Aodhan Quinn recorded one goal and two assists across two appearances and provided the assist on both of the side’s game-winning goals, including Darren Mattocks’ late tally while the side was down to 10 men in a 2-1 victory against Orange County SC on Saturday night.

M – Jonathan Perez, LA Galaxy II: The 18-year-old was a key attacking force in Los Dos’ 1-0 victory against Oakland Roots SC on Saturday night, recording three shots and three key passes while completing 5 of 5 dribbles before winning the penalty kick that allowed the visitors to earn a key three points to boost their playoff chances.

F – Lindo Mfeka, Oakland Roots SC: The South African playmaker recorded two goals and one assist to lead Oakland to a key 3-1 victory against the Tacoma Defiance on Wednesday night to continue the club’s drive toward a potential playoff berth.

F – Sebastian Guenzatti, Tampa Bay Rowdies: The Rowdies’ captain bagged his second consecutive two-goal game to move into a tie for second in goals in the league this season and had five shots overall while winning 7 of 10 duels and completing 24 of 32 passes in a 2-0 win against Atlanta United 2 on Saturday.

F – Hadji Barry, Colorado Springs Switchbacks FC: The Championship’s leading scorer notched his 22nd and 23rd goals of the season as the Switchbacks rallied for a 2-1 victory against Rio Grande Valley FC, and also won 3 of 3 tackles and made six recoveries in the performance.