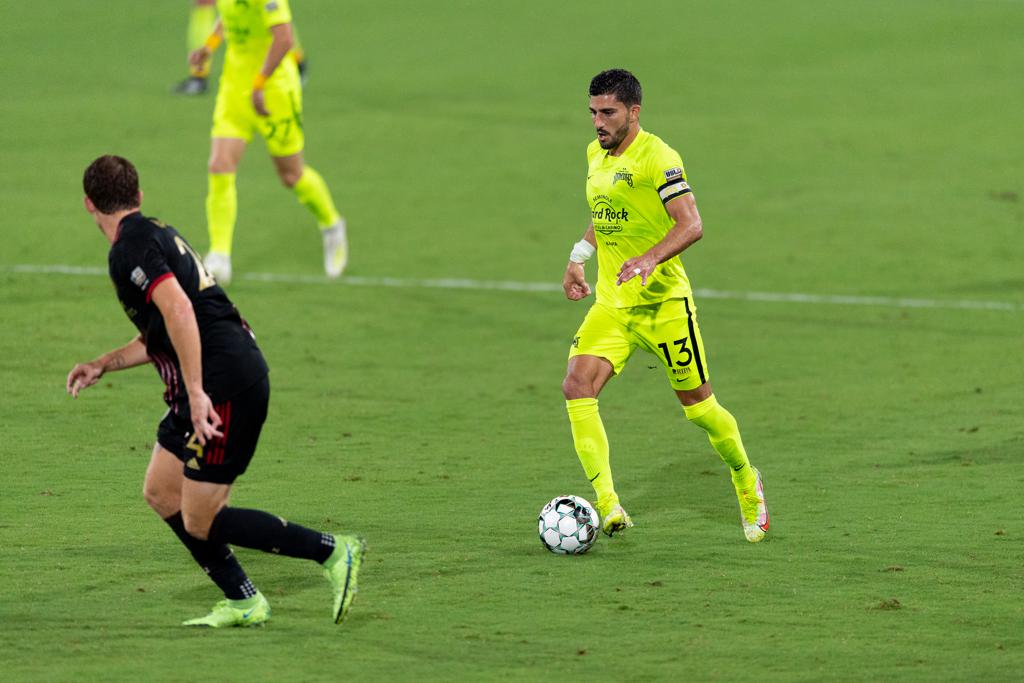 After Saturday’s sturdy defensive shift on the field, the Rowdies’ shutout streak now stands at 801 minutes and the club has notched 13 total clean sheets on the year. The Rowdies have also now recorded 6 straight wins, 8 straight clean sheets, and are unbeaten in their last 9 outings.

“Every week you come in trying to guard against complacency, but I’ve not had one real thought that complacency has been setting in,” said Rowdies Head Coach Neill Collins. “These guys have managed that well themselves. It’s been a great run. A lot of great performances as well, I think that’s the main things. Some really good performances.”

The night started off on the right note for the Rowdies, who jumped ahead of the hosts in the 2nd minute. Moving in from the left wing, midfielder Laurence Wye drove a cross toward the near post that keeper Rocco Rios Novo was unable to control. As a couple of defenders meandered around the ball waiting for Rios Novos to collect, Guenzatti swooped in and slotted the ball into the back of the net with the outside of his right foot.

Guenzatti’s opening goal was his 49th for Tampa Bay, moving him ahead of Rowdies legend Rodney Marsh’s 48 tallies.

With the Rowdies grabbing an early go-ahead goal, Atlanta began to string together long spells of possession and eventually earned their first shot on target of the night just past the half hour mark. Darwin Matheus played a pass for an unmarked Erik Lopez at the top of Tampa Bay’s box. Lopex fired a low strike and Evan Louro stretched out to his right to parry the effort out of danger.

“It’s good to get the goal early, but it probably made the game more difficult,” said Collins. “I thought the boys managed it well and used their experience. The consistency of having these players together is starting to show in these moments. Give me a goal after two minutes of every game and I’ll be happy, but it does change the context of the game… Good experience and good maturity showed from the boys.”

Atlanta appeared content to head into the locker room down just a goal as the match entered added time, but Guenzatti and the Rowdies had other ideas. Pouncing an opportunity in Atlanta’s half in the 46th minute, Hilton played Steevan Dos Santos into space on the right edge of the box and the forward then crossed the ball in for Guenzatti in front of the net to tap home.

With his second goal of the night, Guenzatti joined the company of past strikers Derek Smethurst (56) and Gerogi Hristov (60) as those who have reached 50 goals for the Green and Gold. Guenzatti was also following up on a two-goal performance from last week.

Tampa Bay’s shutout streak became an historic one four minutes into the second half, as they surpassed Rio Grande Valley FC’s previous record of 759 minutes set in 2016. Louro, however, wasn’t ready to let the streak die late in the match as he produced another outstanding save. Substitute Jackson Conway blasted a strike from inside the box but Louro was there with another diving stop and then regrouped quickly to make Phillip Goodrum hesitate with his rebound attempt that went wide.

Tampa Bay remains on the road next Saturday to face Hartford Athletic for the fourth time this season.