Ekra Tapped as USL Player of the Week, Guenzatti Back on Team of the Week 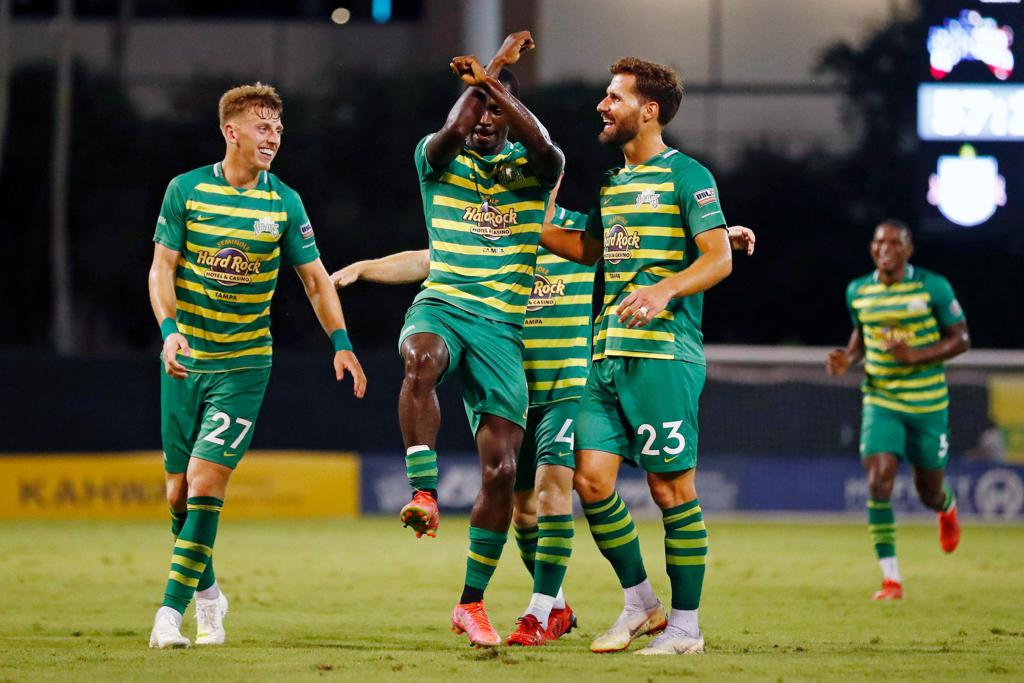 ST PETERSBURG, Fla (September 14, 2021) - The Tampa Bay Rowdies are once again well-represented on the USL Championship Team of the Week. For Week 21 of the 2021 season, both Rowdies midfielder Yann Ekra and club captain Sebastian Guenzatti earned spots on the Team of the Week after each notched two goals and two assists in Tampa Bay’s 6-0 victory over New York Red Bulls II.

Midfielder Leo Ferandes also earned a spot on the Team of the Week’s bench for his two goals in the win against New York as well.

This is the first Team of the Week selection this year for Ekra, who recently became the 10th player in USL history to surpass 200 matches played in the league. Guenzatti, meanwhile, is making an appearance on the squad for the third time this year and now leads the Rowdies with 12 goals.

Ekra, 31, tallied both of his goals in the second half of Saturday’s match, adding the final two blows to the visiting Red Bulls II. In the 58th minute, he connected with a pass back from Guenzatti on his first touch to blast the ball into the back of the net. He then bagged his second in the 69th minute, collecting his own rebound after having an initial shot blocked and calmly slotting a shot from the top of the six-yard box past the keeper.

Ekra also assisted on both of Guenzatti’s goals. For the first, Ekra laid off a pass for the captain to take in stride past several defenders before slipping a shot into the goal in the 38th minute. Then, just four minutes into the second half, Ekra picked Guenzatti out at the top of the box with ample space to strike the ball into the net. Guenzatti’s goals bring his overall tally in Tampa Bay up to 48. Guenzatti’s night got off to a rocky start with a headed goal waived off for offside and then having an attempt from the penalty spot thwarted, but he more than made up for it by the final whistle.

With two wins and two shutouts at the Charleston Battery and New York last week, the Rowdies established new club records for consecutive wins with their 5th straight victory and clean sheets with their 7th consecutive shutout, while also extending their unbeaten run to 8 matches.

View the full USL Championship Team of the Week from Week 21 below:

GK – Connor Sparrow, Miami FC: Connor Sparrow recorded a nine-save shutout, including eight saves coming on shots from inside the penalty area, and also notched three punched clearances as Miami FC took a 2-0 victory on the road against Memphis 901 FC.

D – Hugh Roberts, Charlotte Independence: Hugh Roberts helped lead the Independence to a pair of shutout victories over the week, recording a goal and assist in the side’s win against Loudoun United FC while winning 3 of 3 aerials and 2 of 2 tackles and making eight clearances over two games.

D – Fabien Garcia, Austin Bold FC: The French defender scored the decisive goal in Austin’s 2-1 win against San Antonio FC and over two victories won 4 of 5 tackles while making 14 recoveries and four interceptions as Austin moved into the playoff positions in the Mountain Division.

M – Aodhan Quinn, Phoenix Rising FC: Aodhan Quinn recorded a goal and assist and seven key passes overall in Phoenix’s 4-3 victory against the LA Galaxy II on Saturday night, and in turn became only the third player in Championship history to reach both 35 regular-season goals and assists in the league’s history.

F – Christiano Francois, Miami FC: The Haiti international scored both goals as Miami took victory against Memphis 901 FC at AutoZone Park and completed 2 of 2 dribbles and 14 of 22 passes as the side kept pace with its rivals at the top of the Atlantic Division.