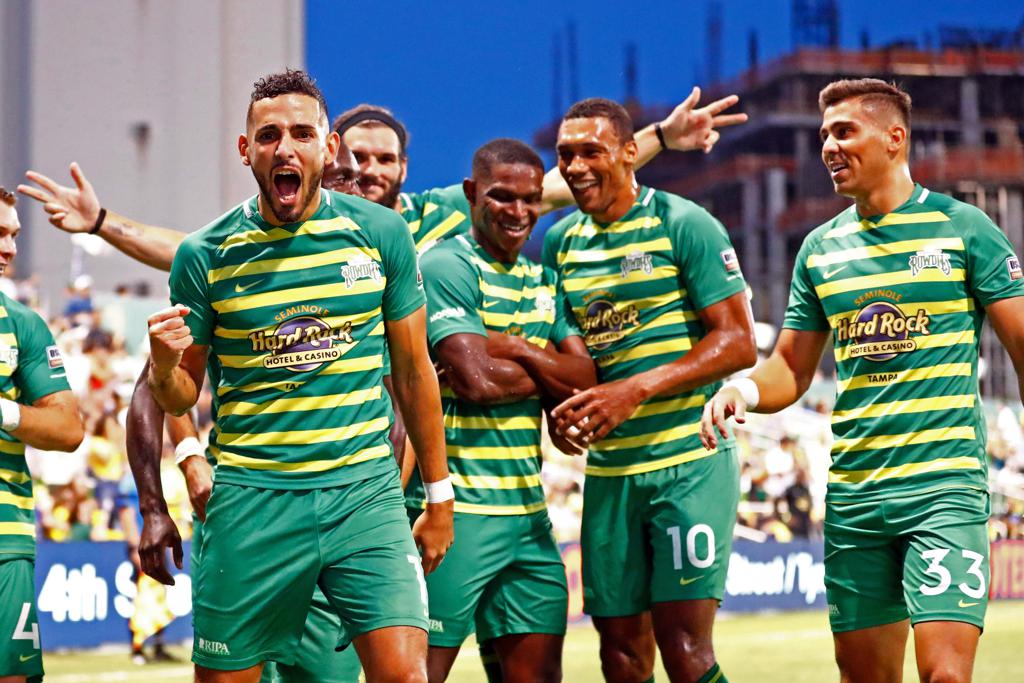 “(The players) created the opportunities. They were relentless in the way they went about the game,” said Rowdies Head Coach Neill Collins. “…New York’s not had many defeats like that. It’s been one goal losses, the majority of their games. But when the boys like that, it’s a joy to watch. The players got what they deserved for their effort and their quality.”

The Rowdies were on top of New York’s defense from the start, with Guenzatti burying a head four minutes only to be denied by an offside flag. Guenzatti then had a chance from the penalty spot after Steevan Dos Santos was shoved down in the box, but he saw his penalty attempt to the bottom left corner thwarted by Luca Lewis.

In the 12th minute, the floodgates finally opened. Sebastian Dalgaard whipped in a curling cross from the right edge of the box and Fernandes powered the ball past Lewis despite the keeper getting a touch on it.

When it looked as if the Rowdies were going to settle for just one goal in the first half, they added two more right before the break to pull out to a more comfortable lead. Guenzatti got the goal he was seeking in the 35th minute, receiving a pass from Ekra 35 yards out and driving through several defenders before slotting a shot past Lewis.

“After I missed my penalty, I just thought I have to make up for it, the team needs me” said Guenzatti. “Leo scoring two minutes after my penalty and then me scoring left a good platform for us to go on and keep scoring.”

Guenzatti played setup man for longtime teammate Fernandes by chesting the ball down for Fernandes to take in stride into New York’s defensive third. Fernandes then clinically deposited the ball into the back of the net.

It did not take long for the Rowdies to add a fourth in the second half. Four minutes into the half, Ekra found Guenzatti at the top of the box with acres of space and Guenzatti did not waste the opportunity to notch his 12th goal of the season.

Ekra and Guenzatti swapped roles in the 58th minute, as Guenzatti penetrated New York’s box from the left wing and laid a pass back for Ekra at the top of the box to one-time across the line. Ekra matched Fernandes and Guenzatti in goals in the 69th minutes, collecting his own rebound from an initial strike in the six yard box and slipping it past Lewis.

“The one thing I don’t worry about is complacency,” said Collins. “It’s just a really good performance. The boys have come off the back of a few good performances. They’ll enjoy a couple of days off and they’ll get ready to go again.”

With the win, the Rowdies keep atop the Atlantic Division standings and also retain their title as the club with the most points across the USL Championship. They now hit the road for three straight away matches, starting with a trip to Atlanta United II next Saturday. The Rowdies return to Al Lang stadium on Thursday, October 7 to face the Charleston Battery.