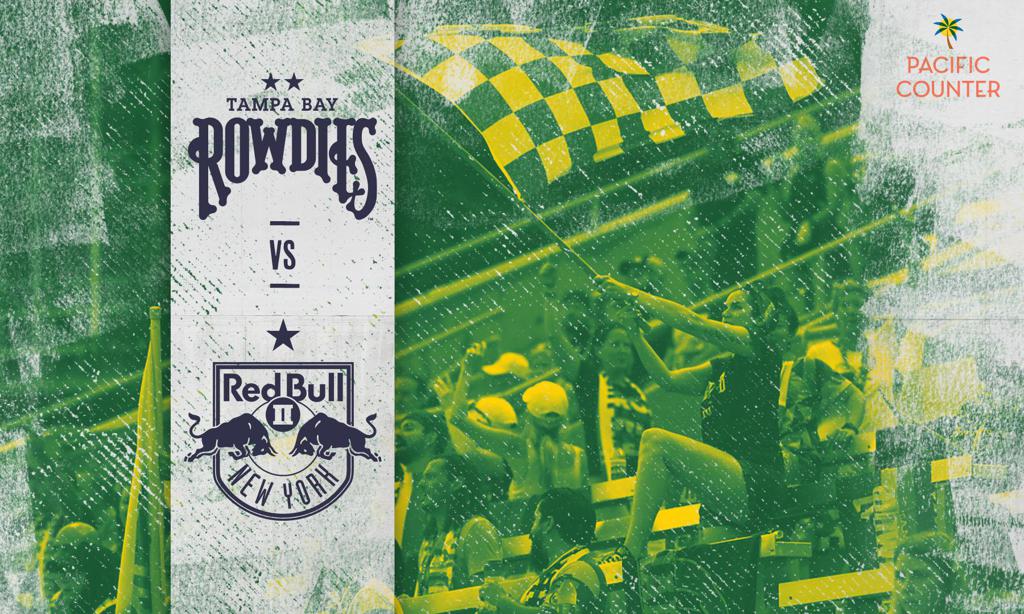 Tickets: Fans can purchase tickets here or by visiting the Al Lang box office starting at 2pm on gameday.

Pre-game Show: Tune in to the pre-game show at 7pm ET hosted by The Unused Substitutes Podcast live on the Rowdies Gaming Twitch Channel here.

The Tampa Bay Rowdies (15-6-1, 43 pts.) return from a quick trip to South Carolina on Tuesday after a 1-0 win over the Charleston Battery, which gave them sole possession of the top spot in the Atlantic Division standings and the highest points total in the USL Championship. Pittsburgh Riverhounds SC sits just two points back in second place, though, so there is no time to rest for the Rowdies.

This Saturday, the Rowdies host New York Red Bulls II (4-13-4, 16 pts), who the Rowdies have beaten in two away matches so far this season. New York has struggled to find consistency all year, but the club is coming in Al Lang on the back of a 2-0 win at Hartford Athletic to snap a seven-match losing streak. The Rowdies will look to ensure New York does not make it two straight for the first time this seaosn.

Saturday will be the first time the Rowdies host New York since May of the 2019 season. The Rowdies won that night 2-0, with current Rowdies center back Jordan Scarleet and keeper Evan Louro both in the starting lineup for New York. Both have since become mainstays for Tampa Bay, appearing in 41 matches over the last two seasons.

"We respect the way New York plays and we know what we have to do to be successful against them," said Rowdies Head Coach Neill Collins. "I think us playing at home always give us a confidence in what we can do. But what I would say about New York is they stick to their principles no matter who they play. Some teams come to Al Lang and are fearful and change. I think that’s what experience does, whereas the younger players come and they don’t care whether they’re playing in Tampa Bay or New York. They’re gonna go for it, so we need to be mindful of that. By the same point, we know what we need to do at home to get our fans behind us and to do well. It’s definitely a balance , but we know what we need to do against New York and that doesn’t change too much."

Tejada's Return
Fan-favorite Juan Tejada made his long-awaited return from injury last month and now finally has his first start of the season under his belt after Tuesday's shift at Charleston. Tejada played 73 minutes before being taken off, providing plenty of energy up top to set Tampa Bay's defensive press and also would have scored if not for a stellar save by the keeper.

"The first games I came in, I felt I struggled a little bit," said Tejada. "It’s been a long time, but I was happy with how the game Charleston went. We started the game so well and really I think I needed that kind of game to get my confidence back and kind of get my feeling again of being a player. I felt very good against Charleston and hopefully I can build up from there and get a goal soon."

Right Wing Options
Right wingback Conner Antley will be unavailable the first time this year after receiving a red car late against Charleston. Antley has played the majority of the minutes out on the right wing for the Rowdies this year, but Collins is confident is other will be able to pick up the slack in Antley's absence. Dayonn Harris, who had several positive appearances out on the right wing before going out, is finally fit and available after missing over a month of action due to a hamstring injury and then an illness. Sebastian Dalgaard is another option on the right wing. The Danish midfielder is riding high after several weeks of strong performances and his outstanding goal into the top corner last week at Al Lang. Dalgaard has been playing on the left wing recently, but he has plenty of experience on the right wing as well.

Keeping Al Lang a Fortress
Picking up all 3 points this weekend will be a priority for the Rowdies this weekends. A win is always the goal, but a win before you head out for a three-match road swing is always nice. The Rowdies have only dropped points at home twice this year.

"We know this place has been a fortress and that's what we call it," said Rowdies Assistant Coach Stuart Dobson. "We are definitely looking at a great performance, and we know that 3 points will come if we're dialed in and we have the mentality that we've had over the last few weeks, it'll be a good outcome for us."

A Chance at Another Record
On Tuesday, the Rowdies established a new club record consecutive clean sheets with their 6th straight shutouts. This Saturday, they have a chance at another record if they can pull off another victory. A win this weekend would be the Rowdies' fifth straight, their longest winning streak of the modern era. They have already come close this year, when they started out the season with four straight wins. This time they will look get the job done with a fifth victory.