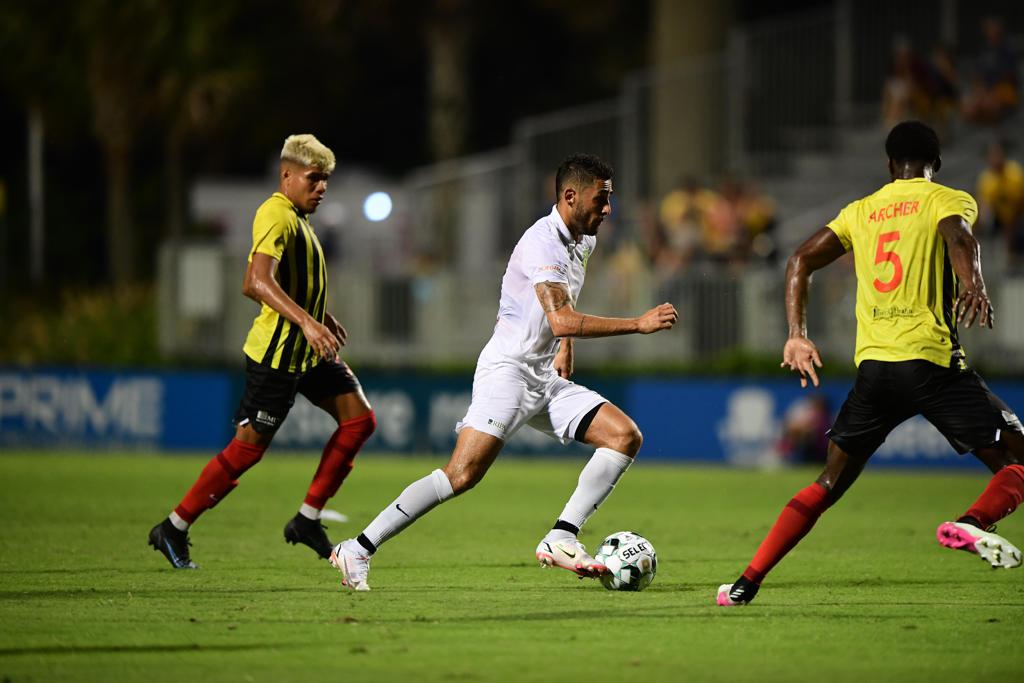 The Tampa Bay Rowdies remained unscathed on the scoresheet for the sixth straight match after a 1-0 victory against the Charleston Battery FC on Tuesday night, establishing a new club record for consecutive clean sheets.

The Rowdies have kept the opposition from finding the back of the net for 621 minutes. Their last concession was in the 9th minute of the August 2 win at New York Red Bulls II, the team coming into Al Lang Stadium this Saturday.

Tampa Bay now leads the league with 11 total clean sheets on the year and Rowdies keeper Evan Louro is front of the pack in the USL Championship’s Golden Glove race with a 0.68 goals against average. Even when the Rowdies went through their summer lull in July, Collins never wavered on the strength of his side on the defensive end.

Locked In for the Points
The Rowdies are the only team left in the league to have not dropped any points after scoring the first goal in a match. This is another area where having such a stout defense pays off.  The only nagging issue for the Rowdies this season has been scoring with consistency, but they may have turned a corner in this department over the last few weeks. With the return to a full compliment of strikers now, the Rowdies have notched 11 goals in their last seven matches and raised their season total to 32 tallies.

Leo's Back
Leo Fernandes made his return to the starting lineup on Tuesday after missing several weeks with an injury, though he did so in a slightly different role.

Coming off a match on Friday, Collins made a few changes to the starting lineup at Charleston. Max Lachowecki slotted in at left wingback, Juan Tejada earned his first start of the year since coming back from his hamstring injury last month, and Fernandes stepped into a more actively creative position up top.

“I just felt Leo, regardless of what formation Charleston played, could give us something in that role and I think we got it,” said Collins. “We were looking to get him and Juan Tejada back in the fold, but obviously not wanting to make changes for changes sake… I thought Leo took the position well and it freed him up a little bit in his first game back. He didn’t have quite the same defensive responsibility, although he did set the press quite well for us.”

Dalgaard ended up having to come off the bench in the 16th due to an unfortunate injury for Max Lachowecki, but both Fernandes and Tejada put in lengthy, quality shifts in the attack. Fernandes set Tejada up for a chance in the box that was well saved by Joe Kuzminsky and he then offered up the pass which broke Steevan Dos Santos into the final third, which eventually led to Lewis Hilton’s winner from 20 yards out.

“I think I’ve always known Leo’s got that capability,’ said Collins. “I think he’s shown it very well late in games. It’s great to have that string in our bow that Leo can play there, just like we know Seb Dalgaard can play there as well. That’s the thing, we’re always learning about our team. Leo took that opportunity tonight and I thought Juan Tejada was equally as good. It’s great to have those guys back.”

Riding Out the Red Card
Tuesday’s result was put at risk in the 82nd minute when Rowdies right wingback Conner Antley was sent off with a straight card for coming in with a high boot. In attempting to force a turnover on the right winglin, Antley was judged to have made contact with the head of AJ Paterson with his boot.

It was the first time the Rowdies have had to contend with playing a man down since October 19 of the 2019 season. Going that long without having a player sent off is a good example of how disciplined the Rowdies have been in their play the last two seasons.

Fortunately, there was no panic from the Rowdies and they only had to wait four minutes to see Charleston lose their advantage when Leland Archer picked up a second yellow card after pulling Lucky Mkosana down in order to squash a counter attack.

“It was obviously a challenge, but I felt the players handled it fantastically well and played out the game really well.” said Collins. “10 v 10 can be quite difficult at that stage of the game, but I thought we controlled it very well. So credit to them for that. It would’ve been disappointing to not come away with 3 points after a good performance.”