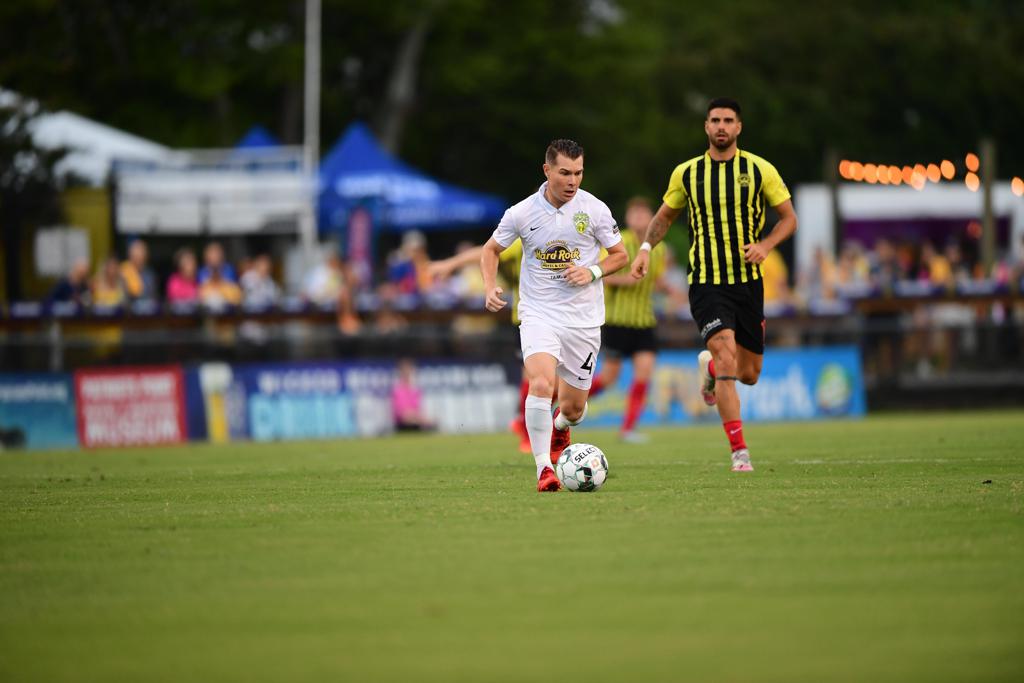 The Tampa Bay Rowdies extended their unbeaten run to seven matches on Tuesday night with their fourth straight victory, knocking off the Charleston Battery on the road 1-0. With the result, the Rowdies also established a new club record of six straight matches without conceding a goal.

There were tense moments in the final stages of the match as the Rowdies were reduced to 10 men when right wingback Conner Antley received a straight red card. However, the Rowdies only had to contend with being down a man for a few minutes as Charleston’s Leland Archer picked up a second yellow card to even the match at 10 men each.

“We’ve had our battles with Charleston over the years, not just the last two years, but ever since I was a player," said Rowdies Head Coach Neill Collins. "I thought tonight our performance deserved the win. My biggest concern coming out of halftime was we we weren’t gonna get the win our performance deserved. I think the first half we were as good as we could be. We lacked a little bit in the final touches, but I’m very pleased for the players  to get their efforts rewarded tonight.”

The Rowdies earned the first shot on target of the night in the 9th minute, when forward Steevan Dos Santos headed a deflected cross sent in by Leo Fernandes right at keeper Joe Kuzminsky. Shortly after that, Charleston’s Josh Penn ripped a low strike from the top of the box that narrowly missed at the far post.

Both sides had stretches of sustained possession in the opening half, but the Rowdies managed to get to the halftime break without allowing a shot on goal. That changed five minutes into the second half, though, when Penn guided a volley from the top of the box right at keeper Evan Louro. That attempt ended up being the only one sent on target by Charleston in the match.

The Rowdies came close on two chances in close succession in the 61st minute. Fernandes played a perfectly weighted pass into the box for Juan Tejada to run onto and the Panamanian forward blasted a shot which Kuzminsky tipped into the crossbar. The rebound fell for Dos Santos, but his header also hit the crossbar and stayed out.

Undeterred, the Rowdies found their winner two minutes later. As he drew a couple defenders toward him in the box, Dos Santos looked up and lofted a pass back toward the top of the box, where Lewis Hilton was waiting to tap the ball down and rifle a shot through a crowd of defenders and past Kusminsky.

Antley was shown his red card in the 82nd minute, after coming in for a challenge with a high boot near the face of AJ Paterson. And just four minutes laters, Archer earned his second yellow for pulling down Lucky Mkosana while attempting to quell a counter attack, killing off any chance the hosts had at finding a late goal.

“I thought the players handled (the red card) fantastically well and played out the game well. 10 v 10 can be quite difficult at that stage of the game, but I thought we controlled it very well. So credit to them for that. It would’ve been disappointing to not come away with 3 points after a good performance.”

With the win, the Rowdies return to the top of the Atlantic Division standings with 46 points on the season, the highest total of any team in the USL Championship. They now hold a two point advantage and still have two matches in hand on the Atlantic Division’s second place side, Pittsburgh Riverhounds.

The Rowdies return to Al Lang Stadium this Saturday for one of four remaining home fixtures of the year. They host New York Red Bulls II, who the Rowdies have already beat twice in two road trips already this year. Tickets for the match can be purchased here.