Two Assists Put Wyke on USL Team of the Week 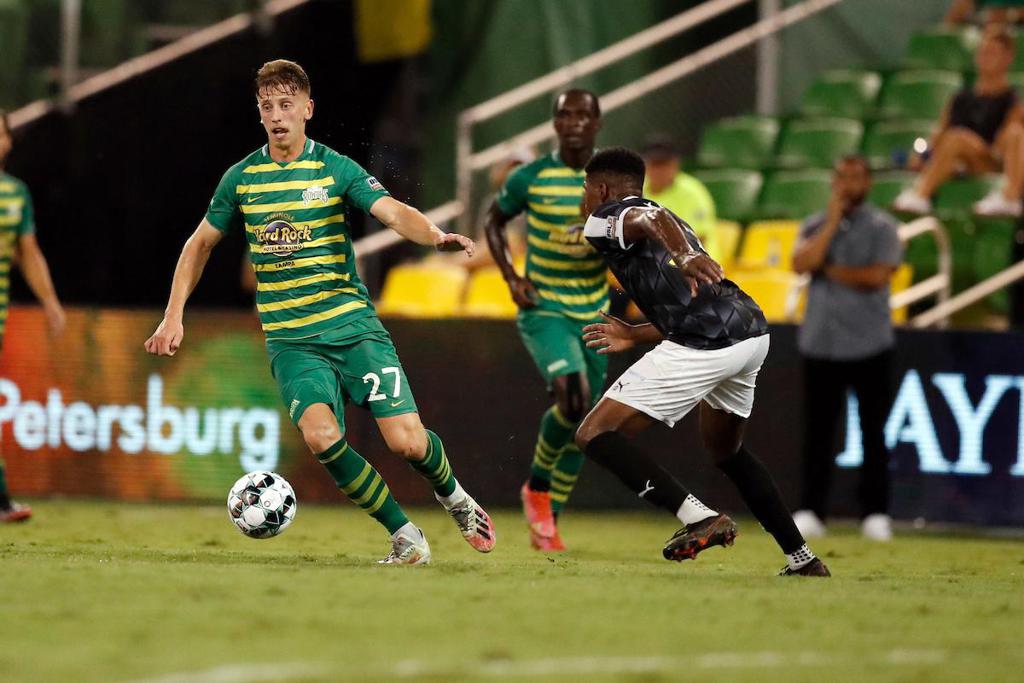 ST. PETERSBURG, Fla (September 7, 2021) - The USL Championship announced the Team of the Week for Week 20 of the regular season on Tuesday, with Tampa Bay Rowdies midfielder Laurence Wyke earning a spot on the squad for the first time this season after a superb shift in the club’s 3-0 victory against Oakland Roots SC at Al Lang Stadium last Friday.

Rowdies captain Sebastian Guenzatti was also named to the the bench of the Team of the Week after bagging the opening goal against Oakland, his 10th of the year and 45th overall for the Green and Gold.

Wyke, 24, contributed on two of Tampa Bay’s tallies versus Oakland. He was credited with an assist on midfielder Sebastian Dalgaard’s missile into the top left corner in the 41st minute to double the Rowdies’ lead before the halftime break. Wyke then helped set up Lucky Mkosana up for his first goal of the season in the 81st minute, powering a header from midfield into Oakland’s half of the field for Mkosana to latch onto and score.

With those two assists, Wyke’s season total stands at 4 assists, He is now even with midfielder Lewis Hilton for most assists on the club.

The Rowdies and Wyke were relentless in pressing Oakland up the field most of the match, preventing the visitors from getting out on their own and developing much of a rhythm. Wyke made 4 key passes, won all of his tackles in midfield, and recorded 39 of 48 passes.

Wyke recently passed 1,000 minutes played this year after missing some time during the season due to a knock. Following the Oakland match, Wyke has now played 1,144 minutes in 16 appearances for the Rowdies. This is Wyke’s first season in Tampa Bay. He came to the club as a trialist in the offseason and made enough of a mark on Neill Collins and staff to earn a contract.

GK – CJ Cochran, OKC Energy FC: CJ Cochran recorded 13 saves across two outings, including a seven-save shutout on Wednesday night against Memphis 901 FC that helped his side to a 1-0 victory despite being reduced to 10 men for more than an hour of action.

D – Jelani Peters, Pittsburgh Riverhounds SC: The Trinidad and Tobago international scored the only goal as the Hounds took a 1-0 victory against the New York Red Bulls II on Wednesday, and over two games recorded seven interceptions, won 8 of 9 tackles and 18 of 24 duels and made 10 clearances.

M – Laurence Wyke, Tampa Bay Rowdies: Laurence Wyke notched a pair of assists in the Rowdies’ 3-0 victory against Oakland Roots SC on Friday night and had four key passes overall while completing 39 of 48 passes and winning 3 of 3 tackles in the center of midfield.

M – Bolu Akinyode, Miami FC: The Nigerian defensive midfielder put in work on Saturday night in his side’s 2-2 draw with the Charlotte Independence, winning 11 of 13 duels and 8 of 9 tackles and recording 16 recoveries defensively while also completing 57 of 63 passes.

F – Corey Hertzog, San Diego Loyal SC: The veteran forward scored twice in SD Loyal’s 4-2 victory against the LA Galaxy II on Sunday to move level with Jorge Herrera for second all-time in the Championship on 72 regular-season goals for his career, while also completing 22 of 36 passes and winning 4 of 6 duels.

F – Darren Mattocks, Phoenix Rising FC: The Jamaican forward scored his first two goals in Rising FC colors in his first start for the club on Sunday afternoon, and also completed 11 of 17 passes as Phoenix handed Tacoma Defiance its first home defeat of the season at Cheney Stadium.