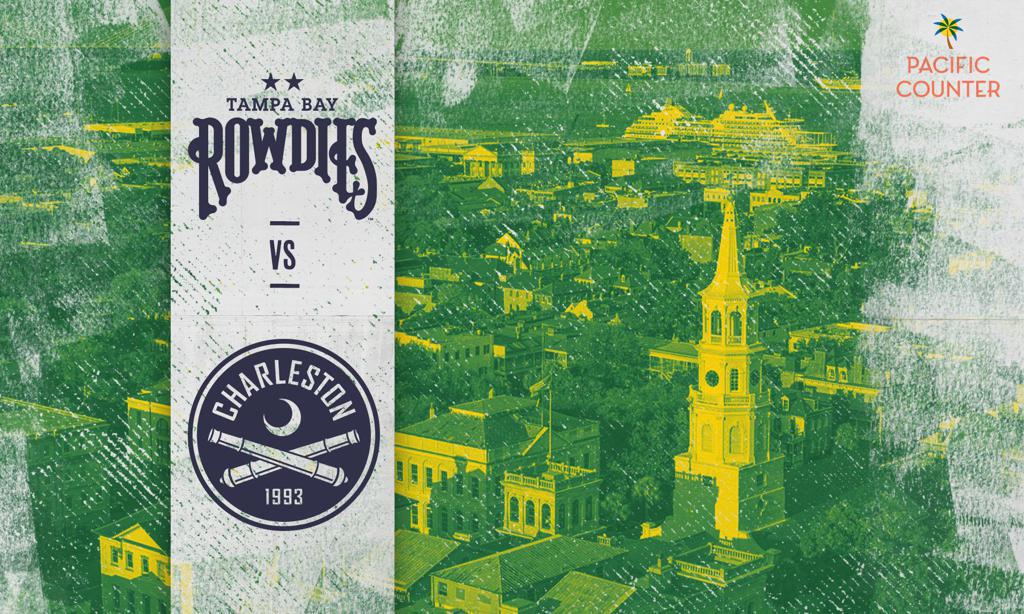 The Tampa Bay Rowdies (14-6-1, 43 pts.) make their first trip to Patriots Point Stadium this Tuesday to face off with the Charleston Battery (8-7-4, 28 pts.). Tampa Bay enters the match on six-match unbeaten streak, with three straight wins in their last three outings after a convincing 3-0 win over Oakland Roots SC on Friday. Meanwhile, Charleston comes in well rested having had their last match last week postponed due to weather.

"We’re in a much better place than we were six games ago," said Rowdies Head Coach Neill Collins. "I think it’s been great for all the players to have that confidence of not only winning some back-to-back matches, but also getting a good point in Pittsburgh. It gave them some confidence to pick up a result when we weren’t at our free-flowing best. But equally, going into Charleston, you know whether you’re in form or not, it’s a tough game. They end up having had the rest prior. I’m sure they’ll be ready and raring to go having had a game canceled. All these challenges that we need to consider, but it’s an exciting test again."

Additions That Can Make a Difference
Tampa Bay's two away days in South Carolina in 2020 were two of the club's toughest results of that season, with the Battery claiming victory and blanking the Rowdies each time.

For those two road trips in 2020, the Rowdies were contending with the absence of two key attackers in Lucky Mkosana and Juan Tejada. Both forwards are now back in the fray for Tampa Bay after recovering from injuries this year. Tejada has looked as lively and aggressive up top as every since returning, while Mkosana managed to tally his first of the season in Friday's 3-0 win over Oakland Roots SC.

On top of that, forward Steevan Dos Santos will also be available for the first time against Charleston since joining the Rowdies this year. The Cape Verde forward missed the last meeting between the two sides on July 2, when the Rowdies won 1-0 thanks to a penalty conversion by Sebastian Guenzatti.

"We’ll have some tough decisions to make for Tuesday night but the right sort of tough decision, a lot easier than going with the same guys and thinking what kind of shape to go with. It’s deciding between some like Lucky who has had two really good performances and deciding between someone like Steevan Dos Santos, Seba Guenzatti, guys that have scored goals. These are the kind of decisions I prayed for at the start of the season. Now I’ve got them so I can’t complain."

The Shutout Streak Continues
The Rowdies defensive dominance continued on Friday night as the club recorded its 5th straight clean sheet and 10th of the year. With 5 straight shutouts, this years Rowdies have matched the record for consecutive shutouts held by the 2019 Rowdies.

Tampa Bay limited Oakland to just one shot on goal, which Evan Louro capably handled to move his goals against average to 0.71. The Rowdies have now gone 531 minutes without allowing a goal.

Opposition Notes
Charleston sits fourth in the Atlantic Division standings currently, occupying the final postseason spot with still two months left in the regular season. However, they only sit in that position based on goal differential. The Charlotte Independence are even at 28 points.

Count the Battery out at your own risk, though. As the Rowdies learned last year, Charleston is a squad with a knack of pulling things together down the stretch and winning when it matters.

"I think Charleston are right in the playoff mix," said Collins. "I think with Charleston you can see they’ve suffered like we all have from not having their strongest team, whether they're missing guys from injury or international duty. But you can see when they’ve got everyone available they’re a real team to be reckoned with. They’re gonna push right to the very end to make sure they’re in the playoffs. I think (Mike Anhauser's) record speaks for itself. He normally gets that job done, so we know from good experience last year just how difficult they can be and how talented some of their players are. Hopefully we can do what we’ve done the last couple of games and come out on top. Certainly nothing will be taken for granted against a team that’s perennially found themselves in the playoffs. They’re putting themselves right in the playoffs again."

Dalgaard's Growing Confidence
Sebastian Dalgaard’s teammates have a lot to live up to if they want to claim the best Rowdies goal of the season after his winder strike against Oakland last week. The Danish midfielder’s first tally for the Green & Gold is not one anyone is likely to forget any time soon.

Dribbling out of pressure on the left wing, Dalgaard cut in to the center of the field and rocketed a shot from 35 yards out that clipped the underside of the crossbar and came down inside the net. The goal was a culmination of several straight positive appearances for Dalgaard, who has featured mostly as a substitute prior to the last few matches.

“I thought the Pittsburgh game was a real turning point for Seb D,” said Collins. “He’s a fantastic player that sometimes doesn’t realize how good he is, how physically fit he is. I thought that game gave him the confidence that he got through 90 minutes and put in a really good defensive performance. That was following on from a really good sub appearance in New York. I think from then he’s gone from strength to strength the past two or three games. I was so pleased he got rewarded with that fantastic goal. I don’t know if in my time in charge I’ve seen a better strike than that. I have seen him do that before in training. We want to keep adding that opportunity for him to keep doing that more regularly. Very pleased for Seb Dalgaard. We know what a good player he is. Long may that form continue.”