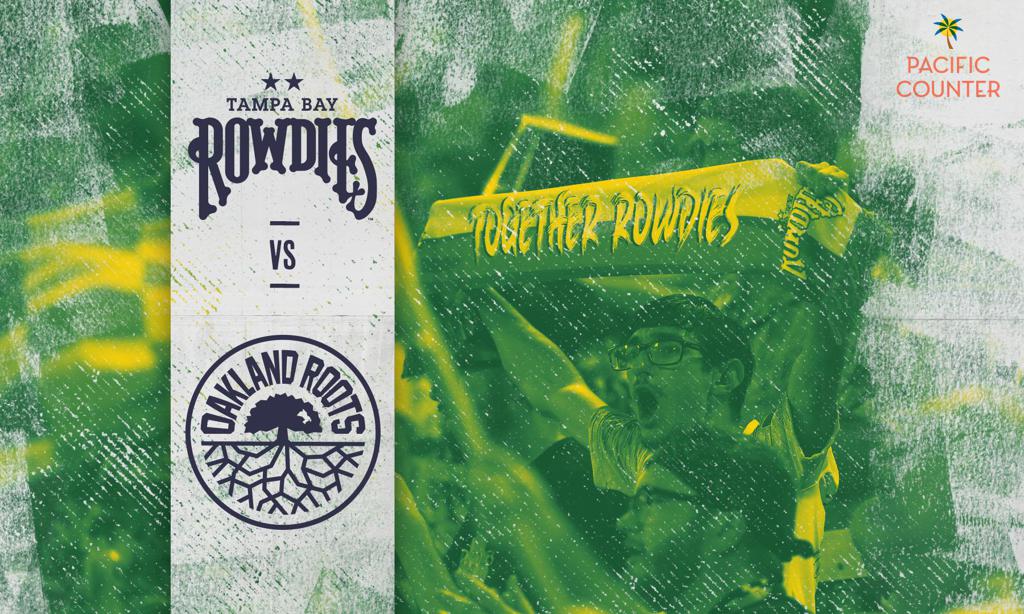 Watch: The match is available to watch on ESPN+ here.

The Tampa Bay Rowdies aim to carry over their five-match unbeaten run in August into September starting this Friday with a home match against USL Championship Western Conference expansion side Oakland Roots SC. A month ago, this matchup might have seemed like a guaranteed result in the Rowdies favor. However, Oakland comes into Al Lang this with a six-match unbeaten run, including a 3-1 win over the Pacific Division's leader Phoenix Rising FC two weeks ago.

"I don’t know if there’s another team in the USL as in form as Oakland right now," said Rowdies Head Coach Neill Collins. "They’ve formed a really good togetherness over the last few weeks. It actually reminds me a little bit of Birmingham in 2019. They struggled a little bit and then got on a really good run. I think Oakland are the same. They're really dangerous, because they seemed to be very well organized. When a team beats Phoenix 3-1 and then follows it up with another 3-1 victory at home against Tacoma you know they’ve found something. We’re definitely aware of that, we’ve done our homework."

Friday will be the second Western Conference opponent the Rowdies have faced this season. They knocked off Phoenix 2-1 at Al Lang back in May in an exciting match and are hopeful about getting a similar result this week.

"I think our last game against Phoenix was fantastic for the staff and the teams because you have to do that little bit of extra homework because you don’t have as much knowledge as you do of the teams you play three or four times," said Collins.  "It’s gonna be a good test. It's good for the fans and I think it’s good for the league. These games against Western Conference teams we’ve had in the past have been fun to watch. Hopefully that’s the same on Friday evening."

Wyke Finding His Spot in Tampa Bay
Last weekend, midfielder Laurence Wyke became the 10th Rowdies player this year to pass 1,000 minutes played. Wyke came to Tampa Bay as a trialist after only playing a handful of matches with Atlanta United in MLS last year and has enjoyed earning a regular role in the squad with the Rowdies. He recorded his second assist of the year in the 2-0 win over Charlotte.

"For me, coming in here to start the year my main concern was getting in the team and finding a place in the team, solidifying my spot," said Wyke. "I’m more than happy playing center mid. At Atlanta United I didn’t really have the coach’s confidence to play freely because there was a lot of high value guys there. Whereas here with Coach Collins, I have the confidence to go play freely, do it myself  and play forward. "

A True Collective
Rowdies keeper Evan Louro earned plaudits this week with a USL Championship Player of the Week selection on the back of two clean sheets and a penalty stop at Loudoun United FC. Louro and the Rowdies also posted 4 straight clean sheets in the month of August, putting Louro at the top of the USL's Golden Glove leaderbard with a 0.75 goals against average.

"Evan rightfully gets some praise for that. I thought his penalty save in Loudoun was excellent. Is it his best football? That’s certainly possible. It’s just great to see him make a couple of great saves in big moments. It’s just great for the team to be having such a great defensive record. I’m sure Evan would be the first to say the guys in front of him are just as big a part of that. It’s been great and I think Evan would also admit he’s been pushed really hard by the two guys that are behind him. I think you could say that across the board in a few positions."

Everyone's Eager to Play
After Oakland, the Rowdies have a pivotal road trip on Tuesday at Atlantic Division rival the Charleston Battery.  However, Collins still aims to put his bets squad available out on Friday.

"We’ve done a good job up until now taking it a game at a time," he said. "That doesn’t mean we don’t plan for games ahead. We always think about who may be best suited for what game. We’re at home on Friday. We’re coming off a good performance and a good win. We’ll try to pick the strongest team on Friday and get prepared. One thing I would say about the players is they’re in a great position physically. They’re looking good. They’re coping well actually with the kind of two games a week. We’re able to make changes we feel are appropriate. I think right now everyone is just eager to be playing."

Making Games More Comfortable
Collins praised his team's second half performance against Charlotte, calling it one of the team's best sustained periods of play of the season. The first half, though, was one of the worst, according to Collins. Those stretches of poor play are unavoidable. The Rowdies focus in those situations is to survive the lull and come out of it within reach of a result.

"The misconception some people have is you’re going to be at your best every minute of every single game. You’re just not," said Collins. "It’s about how controlled you can be when you’re not quite at your best and I think that was what was a bit frustrating in the first 20 minutes. We were making some fundamental errors. If we can cut them out and have more of our really good play that we had in the second half, that’s how you can start to make games much more comfortable. I think we’re playing a team this weekend that are in a very rich vein of form. They’re unbeaten in six and really found themselves as a team and as a club. You couldn’t get a more difficult game right now. They’re the most in-form team right now, along with ourselves."