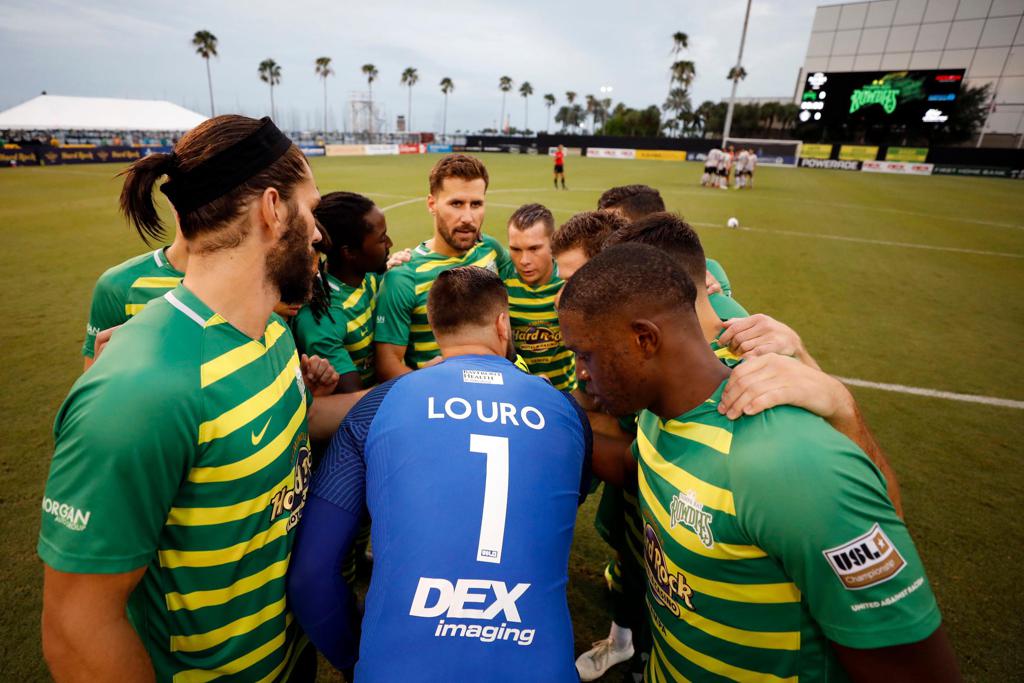 Many were doubting the Tampa Bay Rowdies’ status as a USL Championship title contender after the club’s underwhelming July. At the end of August, though, the Rowdies have reaffirmed that they belong in any conversation regarding which club will win the final match of the year.

While still remaining slightly under the radar, the Rowdies managed to get through all five of their August matches without dropping a single one, recording four wins and a draw. It’s not the first time this year the Rowdies went a month without losing. They also won all five of their matches back in May.

Knocking off the Charlotte Independence 2-0 was an appropriate way to close out August since it was the 2-0 loss at Charlotte in the last match of July which motivated the Rowdies to reestablish the principles that made them one of the best sides in the league. Since that loss in Charlotte, the Rowdies have allowed just one goal in their last five outings.

“The team had a little bit of a tough period by our standards, but I think the standards were so high from last year. You look and our goals against record is fantastic. We ask so much of those (center backs). They not only play a lot, they have to defend high up the field. They have to bring the ball up for us. I think they’ve been back to their best recently and I think they’re improving all the time to be quite honest.”

The Rowdies needed to hang tough defensively in the back through the first half hour on Saturday night. Charlotte held a decided advantage in possession through that period and had the only scoring chances.

Luckily, the defense did hold up and keeper Evan Louro made a key save. The shutout was Louro’s 17th clean sheet with the Rowdies, making him level with former Rowdies keeper Jeff Attinella for the second most clean sheets in the club's history. Matt Pickens holds the record with 28 clean sheets. Louro has already climbed so high up the clean sheets list despite the fact he’s only played in 39 matches.

Dos For Dos Santos
Another factor in this unbeaten month is the return of key players from injury, most notably forward Steevan Dos Santos. The Rowdies attacker was an early standout performer through the first four matches in May but then suffered a broken foot and had to sit on the sidelines for nearly three months.

The foot looked perfectly fine on Saturday as Dos Santos banged in two goals within five minutes to push the Rowdies past Charlotte. Dos Santos had started in Tampa Bay’s previous three matches and showed some encouraging signs in those appearances. Against Charlotte, though, he came off the bench to make his impact.

“It feels good after being out for two and a half months,” said Dos Santos. “I’m still getting my rhythm back because that was a long period of time I was out. I’m still working to get my shape back and my fitness. But it’s always good when I can help the team win. (Collins) told me to go in there and score a goal. You deserve it for what you’ve been doing the last three games. Fortunately I scored two goals and we got the three points.”

Second Half > First Half
When the Rowdies last met Charlotte, it was a poor showing in the second half that let them down. This time out at Al Lang, it was the other way around as the Rowdies were the ones to surge in the back half of the match to find two goals.

Following a tough first half, Collins challenged his players to raise their standard and they did just that. As the visitors faded, the Rowdies' intensity increased. Their second goal was the result of a fantastic high press. First, Conner Antley hustled to keep the ball from rolling out for a goal kick, then Yann Ekra knocked the ball off a defender attempting to clear. Ekra then quickly passed to Wyke, who promptly fed the ball for Dos Santos to bury into the net from the top of the box.

“Honestly I thought the second half was one of our best performances of the season, and I thought the first half was one of our poorest," said Collins. "…Everyone in the second half really raised their game and dominated many aspects. I thought Laurence Wyke showed some great energy and added moments of quality that were missing in the first half. Conner, that’s just what we’re about, that relentless energy. Pressing relentlessly in order to get the ball back and it paid off. It was great, especially with probably the fans spurring him on in the corner. It just gave us a little bit of extra in that moment.”

51 for Dos Santos and 50 for Collins
Collins and Dos Santos both shared milestone moments together on Saturday night. Dos Santos’ first of the night was his 50th career goal in the USL Championship. Being the natural goal scorer he is, Dos Santos immediately moved his tally to 51 goals with his second strike a few minutes later.

Dos Santos’ goals gave Collins his 50th win as Rowdies Head Coach, coming just one match after Collins coached his 100th match with the Rowdies at Loudoun United FC on Monday. Collins, 37, already holds the record for most wins in the Rowdies' modern era.

"My biggest task when I took the job was to raise expectations," said Collins. "I thought our expectations as a club were far too low for the club's status and the backing we had. I still think we just want to keep raising expectations. That's one of the greatest things about the group of players that we've got. They're so honest, and when we win games we don't take it for granted. We're always looking for more. We're always looking for better. This season is a great example. The potential is huge but we're nowhere near it.”