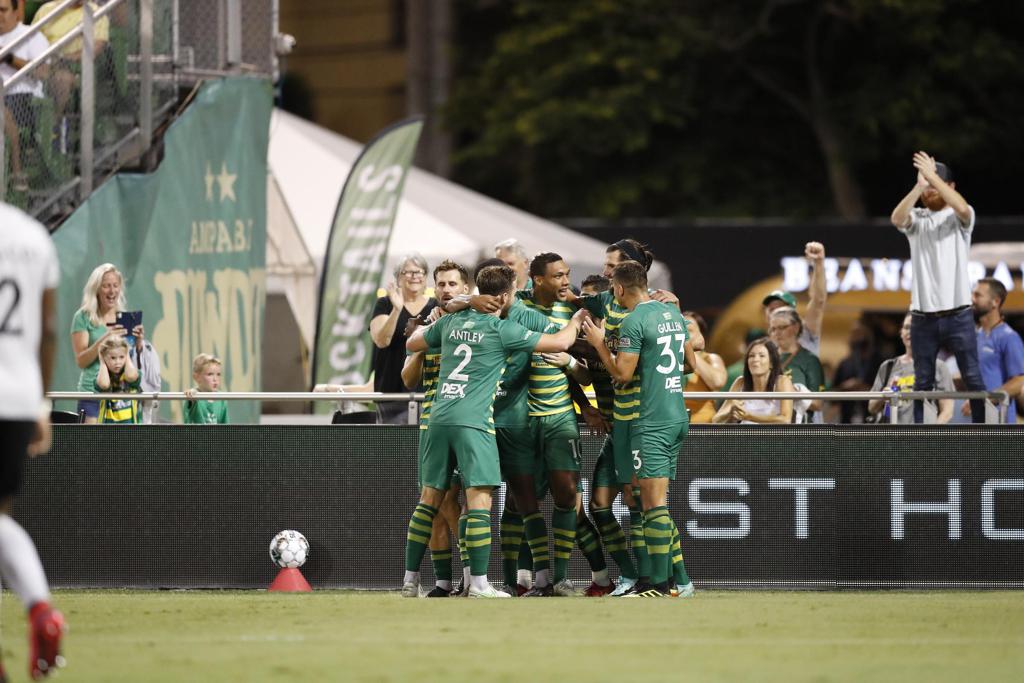 ST Petersburg, Fla (August 28, 2021) - The Tampa Bay Rowdies waited until the second half but got exactly what they were looking for in their fourth and final showdown with the Charlotte Independence in the regular season. Substitute Steevan Dos Santos scored twice within five minutes to give the Rowdies a 2-0 victory in front of the home crowd at Al Lang Stadium on Saturday night.

Charlotte was the aggressor and better side through most of the first half. Just six minutes into the match, Enzo Martinez’s strike required a block from Jordan Scarlett and the rebound fell for Sylvain Marveaux, who blasted an attempt on frame which keeper Evan Louro saved.

The visitors continued to control much of the ball throughout the first half, but the Rowdies did start to grow in confidence past that point and earned a fantastic opportunity in the 31st minute. Forward Lucky Mkosana drew attention on the left side of the box before centering a cross for Laurence Wyke in the middle of the box. Wyke hit the ball with confidence only to see it miss the left upright by inches as it deflected off defender Christian Fuchs.

Charlotte nearly found the go-ahead goal in the opening moments of the second half when a strike from 20 yards out from Marcelo Palomino forced Louro to get low and knock the ball away.

Once the Rowdies got past that chance for Palomino, though, they began to take foothold for the rest of the match. A superb give-and-go between Lewis Hilton, Lucky Mkosana and Sebastian Dalgaard ended with a chance for Dalgaard in the box. He hit the ball in stride with his first touch, but the attempt was wide left of goal.

Mkosana had his own promising look on goal just before being taken off in the 64th minute, as he fired a shot under pressure on target but watched the effort tipped over the bar by keeper Austin Pack.

Mkosana’s replacement Steevan Dos Santos proved to be the difference for the Rowdies. In the 73rd minute, a driven cross from Dalggard in the left corner deflected off a defender and floated in the direction of Dos Santos, who redirected the ball into the back of the net as Pack was caught flat-footed. The tally was Dos Santos’ 50th career goal in the USL Championship.

Dos Santos did not stop there, though. In the 76th minute, he found himself on the end of a hard-earned opportunity by the Rowdies. Conner Antley initiated the sequence with a slide on the endline to keep the ball in the play. Charlotte regained possession, but substitute Yann Ekra managed to strip the ball off a defender and then lay a pass off for Wyke, who swiftly played the ball into space for Dos Santos at the top of the box. The veteran goal-scorer then stretched out to bang his first touch past Pack.

The win keeps the Rowdies atop the Atlantic Division standings. Pittsburgh Riverhounds SC won on Saturday as well, meaning they remain even on points with the Rowdies but behind on the goal differential tiebreaker.

The Rowdies remain at Al Lang for their next match as they host Western Conference expansion side Oakland Roots SC on Friday, September 3. The Rowdies will also host their annual Pride Night for the match against Oakland. Tickets for the match can be purchased here.