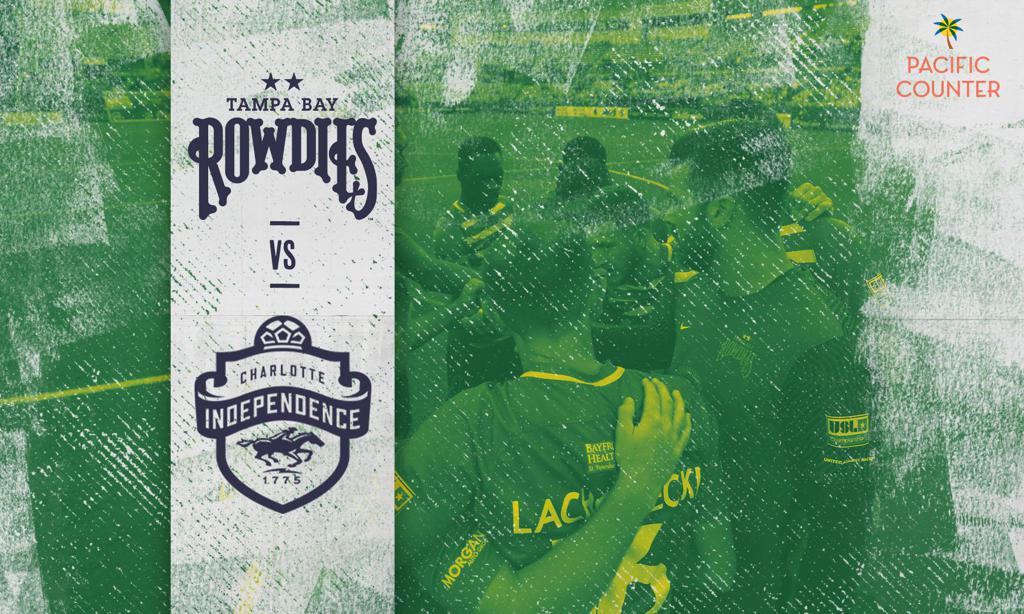 Tickets can be purchased here.

Gameday Specials: Fans can enjoy $5 draft beers from Big Storm Brewing from 6:30pm to kickoff at 7:30pm. Following the final whistle, fans are invited to come down on the field to enjoy a postgame fireworks show.

Watch: Stream the match on ESPN+here.

Charlotte won the last meeting between the two sides on July 31 2-0 on the back of 2 second half goals, while the Rowdies struggled to create much offensively. The Rowdies managed to secure a 2-0 win on the road on Monday at Loudoun United FC thanks in large part to midfielder Lewis Hilton, who recorded a goal and an assist.

Hilton and the Rowdies will look to maintain the momentum from the last four matches against Charlotte.

"Charlotte are a really good team with a lot of good forward attacking players," said Hilton. "The two away games we’ve had there they’ve really given us tough games. I think it’ll be a tough game, but at home we back ourselves against any team to be honest."

Hilton should have a nice confidence boost for this weekend. His winning goal on Monday was his first tally for the Rowdies since joining the club last year. He leads the club with 4 assists and also tops the USL Championship leader board in chances created. Rather than set someone else up with a pinpoint set piece delivery as he typically does, Hilton drove the ball into the net himself with a curling free kick from 20 yards out.

"It was definitely a bit of relief, just because it’s been a long time coming to finally get on the scoresheet, especially from those set pieces," said Hilton. "I feel like I should probably have been chipping them in a little earlier, but it’s always a good feeling to get on the scoresheet."

Opposition Notes
Charlotte most recently finished with a 3-3 shootout with the Colorado Springs Switchbacks at home. Despite the position in the Atlantic Division standings, Charlotte has posted some impressive results during its recent unbeaten run, including the Tampa Bay and second-place Pittsburgh Riverhounds SC.

Charlotte continues to add to its roster as it has over the last two months. The latest addition is former Manchester United and Newcastle United midfielder Gabriel Obertan. Charlotte has also acquired defender Jose Bizama on loan from from MLS' Houston Dynamo. Bizama spent time with the Chilean national team in 2018 and 2019. Former Leicester City FC defender Christian Fuchs joined the club the week of the last time they met the Rowdies but didn't appear in the match. Fuchs has since made 3 appearances.

Maintaining Confidence
The recent string of results is an encouraging trend for the Rowdies after an inconsistent July. Now comes the matter of hanging on to the momentum in order to not fall behind in the race for a postseason spot.

"Confidence I think is important," said Rowdies Head Coach Neill Collins. "The confidence has come back with the results. Results definitely give you confidence. Then from that, performances have been improving as well. We maintain that confidence by showing that same kind of focus that they have done. Honestly I think the players get a massive amount of confidence playing here in front of the home fans and on this field. I think straight away they’ll just be looking forward to the game. As a player, when you’re looking forward it certainly gets you in the right frame of mind to perform your best."

No Margin for Error
Two of the three prior matchups between Tampa Bay and Charlotte this year ended with one team winning by multiple goals, but that doesn't mean either side has been able to run away with the matches.

"All the games have been really, really tight," said Collins. "There’s not been a lot in it. A mistake here or there from either team has been enough to settle the game. We need to be at our best. I feel right now in our conference, in every game you need to be very close to your best to get something out of the game. It’ll be no different this weekend. We just want to try and put on a really great performance for our fans. If we do that, then we generally give ourselves a good opportunity to have the chance at winning the game. But Charlotte, as you can see, have added some really strong players and gone from strength to strength."

Even Higher Expectations
Neill Collins not only recently reached a milestone with his 100th match as head coach, he also set a new record for wins in the modern era with 49.

"My biggest task when I took the job was to raise expectations," said Collins. "I thought our expectations as a club were far too low for the club's status and the backing we had. I still think we just want to keep raising expectations. That's one of the greatest thing about the group players that we've got. They're so honest, and when we win games we don't take it for granted. We're always looking for more. We're always looking for better. This season is a great examples. The potential is huge but we're nowhere near it. There's a lot to be satisfied with in the last 100 games, but there's a lot more to achieve.